After 40 years of categorical refusal to reveal the Third Secret, the Vatican surprised the whole world by announcing its sudden publication during the Holy Year 2000. On the 26th of June, 2000 a big file was published with the title “The message of Fatima”. It contained 7 different documents, the third being the Third Secret, which included a copy of the written version in the original Portuguese language followed by a translation. According to this document, the Secret consists exclusively of a vision of a “bishop clothed in white”, who together with other bishops, priests and religious, was climbing a mountain towards a big cross, passing by a big town partially ruined, and praying for the cadavers on the road. Arriving at the peak of the mountain, kneeling before the Cross, he was killed by a group of soldiers and after him the bishops, priests, religious, men and women. Below the arms of the Cross were two angels each one with a crystal watering can, in which they gathered the blood of the martyrs. They then sprinkled souls approaching God with this blood.

Thanks to the meritorious work of the Fatima Center founded by the late Fr. Gruner, more than 30 arguments have been gathered together to prove that this cannot be the whole secret. Those arguments are confirmed in a book written by the Italian journalist Antonio Socci, called the Fourth Secret, and recently by the chief editor of the Italian weekly Famiglia Christiana Saverio Gaeta in this book Fatima. Tutta la verità. La storia, i segreti, la consacrazione. Because of the importance of the matter, we will consider briefly the main arguments. Our intention is to find the deeper spiritual meaning of this other aspect of the ‘mystery of iniquity’ in the light of Fatima.

A fact: The published vision is not the entire secret

a) The Third Secret contains spoken words of Our Lady

— At the end of the revealed part of the Secret, Our Lady says: “Don’t tell this to anybody. To Francisco, yes, you can say it.” Now, Francisco always saw the apparition, but could not hear the words of Our Lady. If there was only a vision, this sentence would make no sense. There would be nothing to be said to Francisco if Our Lady did not speak!

— The communiqué of the 8th of February 1960, that the Secret will not be revealed by the Vatican, states expressly: “… the letter will never be opened, in which Sister Lucia wrote down the words which Our Lady confided as a secret to the three little shepherds in the Cova da Iria”.

— Fr. Schweigl confirms that the Secret consists in “the continuation of the words: In Portugal the dogma of Faith will be preserved.”

b) “In Portugal the dogma of Faith will be preserved etc.”

With these words of Our Lady, the Third Secret begins. This Secret has to be the explanation and development of the quoted sentence, for that sentence begins a new theme, different from that contained in the First and Second Secrets whose contents we know. Also the “etc.” is proof that the sentence continues.

The 2000 version makes no mention of either a logical or verbal continuation of this sentence.

As we will see below, Sister Lucia always affirmed that 1960 was the date given by the Holy Virgin herself — the date, at the latest, when the Secret should be read to the world. She told Cardinal Ottaviani that “in 1960 it would be clearer”. But how could John XXIII, after reading the Secret, conclude that “this is not for my Pontificate”? He could only affirm such a thing if the Third Secret dealt with something very precise, marking out a specific period. But there is no information in the official secret sufficiently precise to say that it has nothing to do with the Pontificate of John XXIII.

Moreover, the great efforts that Cardinal Bertone made to establish that the date of 1960 was invented by Sr. Lucia underscores the fact that this date creates considerable problems. But a revelation of the vision of the bishop dressed in white at that time would have created no difficulties. The vision refers to cataclysms less serious than those announced by Sr. Lucia in the revealed part of the Secret and so there was no reason for the Vatican to keep that vision under lock and key since 1960.

d) A vision incomprehensible without commentary

In all the apparitions of Fatima, the message is always easy to understand. In the apparitions of the Angel and of Our Lady, including Pontevedra and Tuy, in the numerous revelations and communications given to Sr. Lucia, everything is clear and logical, understandable even to children. “What characterizes the whole of the texts of the message of Fatima is their great clarity. The same is true of all the writings of Sr. Lucia: they are always simple, concrete, precise, easy to understand and without any complicated phrases. None of them have any need of interpretation” (Don Joaquin Alonso).

But the 2000 account of the vision is so complicated, that even the Vatican speaks about “an attempt at interpretation”. Without an explanation, the meaning of many of the elements of the vision is difficult to grasp. What does the crystal sprinkler represent? What is meant by the firing of bullets? The arrows? The rough-hewn trunks? A cork-tree with bark? etc …

If this vision is obscure for the average person today, how much more difficult would it not have been for the three children? If this vision were connected to the Great Secret, Our Lady would have certainly explained the meaning of the vision so that it could be understood, and her words would be the most important part of that section of the Secret.

In the following chapter, we will consider the testimony of all those who have either read the Secret or had knowledge of its contents. They unanimously declare that it has to do with the crisis of Faith, not with wars or natural cataclysms (e.g. Mgr. do Amaral, Cardinal Ratzinger, Fr. Kondor). But the Vatican-published vision aligns more closely with a war involving physical violence than a situation of global apostasy.

What is more, none of the explanations given by Rome for not divulging the Third Secret make no sense, if the Secret consists only in this mysterious vision. These were reasons such as: “Sr. Lucia is still alive”, “the world wouldn’t understand it”, “it would propagate sensationalism”, “it is a very delicate matter which should not fall into hands of strangers” etc. It is hard to see how any of these concerns could apply to the vision.

In its essence, the vision does not reveal anything more than what already had been announced in the known part of the Secret, which describes similar if not worse events. The vision of Hell is much worse and more horrible than this one. There would be no reason to silence Sr. Lucia from 1955 until her death out of fear of her speaking about this vision. She had already announced great calamities for the Holy Father, the Church and the faithful. Moreover, why would Sr. Lucia have such an extreme reluctance and hesitation in writing such a vision down, or employ such precautions when transmitting it to the bishop of Leiria? While it is true that the vision contains a scene of violence and bloodshed, yet Catholics are quite accustomed to stories of martyrdom, because of their prevalence in Scripture and Church history. Such a vision would more likely be seen as a triumph of a series of martyrs than a terrible cataclysm too terrible to speak about.

f) The discoveries of Paolini and Antonio Socci

Thanks to the research of two illustrious Italian journalists, one of whom was a personal friend of John-Paul II, it has been clearly established that in 1957 all writings from Sr. Lucia as well as the Third Secret were sent to Rome, but on a different date. The documentation of Sr. Lucia’s writings was kept in the archives of the Sacred Office, and the Third Secret in the Papal bedroom, in a safe on the desk known as ‘Barbarigo’. However, the 2000 Dossier only speaks of one document sent by the Bishop of Leiria to the Holy See. In his response to Socci’s “The Fourth Secret” book, Cardinal Bertone insists that there was only one text and one envelope held in the archives of the Congregation for the Doctrine of the Faith. But bishop de Capovilla, who was the personal secretary of John XXIII, asserts that there were two different documents sent to Rome. This led Cardinal Bertone to request from bishop Capovilla a denial of his earlier statements. Nevertheless, in response to Cardinal Bertone’s requests, Capovilla made a declaration of the 23rd of September 2007 reaffirming that the Secret was “in the desk called ‘Barbarigo’ in the Papal bedroom.” This was contrary to the repeated declarations of Cardinal Bertone that there was only one document kept in the archives of the Holy Office. Therefore, the official version is falsified by the fact that it came from the wrong place. If the official line affirms that the documents of the Third Secret are solely in the archives of the Holy Office, but in truth the Third Secret is kept in the bedroom of the Pope, the 2000 document loses its historical veracity. 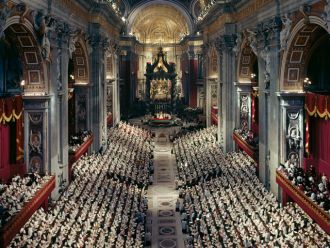