The joyous feast of the Assumption of the Blessed Virgin Mary is celebrated on August 15th, and as a holy day of obligation.

Mary lived, cared for by St. John, for twelve years after Our Lord’s Resurrection. Her life was spent in helping the Apostles and in praying for the conversion of the world. On the third day after Mary’s death, when the Apostles gathered around her tomb, they found it empty. The sacred body had been carried up to the celestial paradise. Jesus Himself came to conduct her thither; the whole court of heaven came to welcome with songs of triumph the Mother of the Divine Word.

Why was Mary’s body received into heaven instead of remaining in the earth, like the rest of mankind? The grave had no power over one who was immaculate. Her flesh could not see corruption. Her body had been overshadowed by the Holy Ghost; it had been the sacred temple in which had dwelt God Incarnate, and so it had a claim to ascend whither that Body of her Son had already gone before. But the chief reason was that as she had shared in each detail in the sorrows and agony of her Son, so it was right that she should take part in His triumph. Let us ask of God, through Mary’s intercession, the grace of a happy death.

Addressing a jubilant crowd of more than 500,000 people packed into St. Peter's Square, Pope Pius XII solemnly defined in Munificentissimus Deus on Nov. 1, 1950, that the "Immaculate Mother of God, the ever-virgin Mary, having completed the course of her earthly life, was assumed body and soul into heavenly glory." Thus, Pope Pius XII, in his Apostolic Constitution Munificentissimus Deus, declared infallibly that the Feast of the Assumption is a dogma.

The Feast of the Assumption gives each of us great hope as we contemplate this one facet of the beautiful woman of faith, our Blessed Mother. Mary moves us by example and prayer to grow in God's grace, to be receptive to His will, to convert our lives through sacrifice and penance, and seek that everlasting union in the heavenly Kingdom.

We published sermon by Father John Jenkins and propers of the Mass.

Sermon for the Assumption of Our Lady 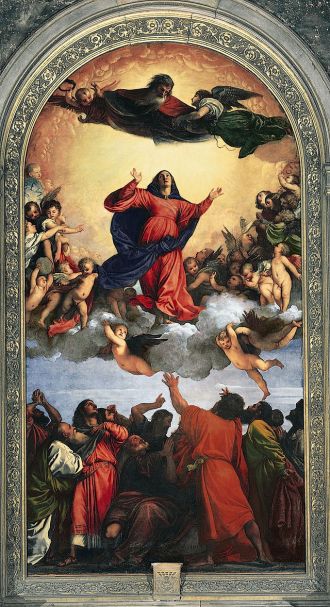