A question: Is it possible that the published version is not part of the secret at all?

We are well aware that the majority of competent Fatima researchers trying to clarify the question about the Third Secret believe that the entire Third Secret consists in the published vision and a commentary by Mary explaining this vision.

Nevertheless, the following thoughts could help to gain even more light and clarity on this subject.

a) The Secret itself doesn’t contain any visions

Lucia spoke for the first time about the Secret in the accounts of the apparitions that She gave in 1922 and in her canonical deposition in 1924: “Afterwards, the Lady entrusted to us some little words (palavrinhas) urging us not to tell them to anybody, except to Francisco…”

For Lucia, the Secret begins with the words of Our Lady, and the vision of Hell is only a preparation for receiving the Secret. This is clear from the way in which Lucia speaks about the communication of the Secret: “after these words, She communicated to us the reflection of the light a third time. During that apparition She revealed the Secret preceded by the vision of Hell” (the 13th of April 1936, copied by her confessor on the 24th of April 1941).

b) A short text

The analysis of the envelope containing the Secret made by Bishop Venancio convinced all of the Fatima experts that the Third Secret is a short text. This is confirmed expressly by Cardinal Ottaviani (see below) and Fr. Alonso. Cardinal Bertone, in his book The last seer of Fatima, states: “For me, it is surprising that Cardinal Ottaviani categorically said: ‘25 lines on one sheet of paper’”. Now why would Cardinal Ottaviani, who had read the Secret, state that it contains 25 lines if this wasn’t true? Andre Frossard, the friend of John-Paul II, stated: “I spoke with the Holy Father about the Secret of Fatima. This time he answered me: “In no way can I publish it! I can only tell you that it is a simple sheet containing 22 lines”.

The two parts of the Secret published by Sr. Lucy in 1942 contain 62 lines. This makes an average of 31 lines per part of the Secret, which makes the 25 lines claimed for the Third Secret by Cardinal Ottaviani seem quite plausible. If the Third Secret, however, consists of the vision of the ‘bishop dressed in white’ as well as some still unpublished words of Our Lady, it would be a voluminous text completely out of proportion with the rest of the Secret.

It is also interesting that during a TV program on the Secret, Cardinal Bertone insists that “the Third Secret is written on one sheet of paper.” His own book contradicts this, for he therein affirms that the Secret is “written on 4 little pages”. Even Pope Benedict in his preface to this book speaks about “the sheets written by Sr. Lucia”. However, during the TV show, Cardinal Bertone only held up one sheet.

d) The terms used are entirely strange for Sr. Lucia

The official version presents a text written by Sr. Lucia describing the vision. Therefore, we can compare it to other visions already described by her (those of the 13th of May, 13th of June, 13th of July, vision of Tuy and the visions Jacinta told her). Many of its expressions do not appear in any of the other writings of Sr. Lucia. Not less than 16 words or expressions in the martyrdom vision cannot be found in anything else she wrote, whether it be her memoirs or her correspondence.

— In the third memoir, the first in which she delivers part of the Secret, Sr. Lucia points out something important: ”Of what does the Secret consist? ... Well, the Secret includes three distinct things and I will unveil two. ... It seems to me that I have already revealed the first part of the Secret. The second refers to devotion to the Immaculate Heart of Mary.”

Subsequently, Sr. Lucia always spoke of one secret. Consequently, there is necessarily a central point around which the three parts turn. Now the central point of the whole message of Fatima is the salvation of sinners. This point appears not only in the first two parts of the Secret, but it is present throughout the history of Fatima, in all the apparitions of the angel in 1916, and at each apparition of the Blessed Virgin, even in Pontevedra and Tuy. Sister Lucia herself affirmed it many times, for example: ”The conversions of sinners, and the return of souls to God. This point was repeated in all apparitions: That is why I consider it to be the essence of the message” (Father MacGlynn 1950).

On the contrary, the published vision introduces completely foreign elements into the message of the 13th of July and to the whole message of Fatima. And since, according to the very words of Sr. Lucia, the Secret is a whole in three parts, it is hard to see how this vision could possibly form part of it.

— A total lack of harmony is also seen when we compare the descriptions of Sr. Lucia’s other visions with this one. We have already said that the rest of the Secret, and the message of Fatima, is perfectly clear. Let us compare, for example, the official secret with the vision of the Holy Trinity at Tuy: the difference is glaring. The vision of the Holy Trinity was surely more difficult to describe since it was much more abstract. Yet Sr. Lucia was able to express this great mystery which she had the grace to contemplate.

In the official secret we read: ”And we saw in an immense light that is God: 'something similar to how people appear in a mirror when they pass in front of it', a Bishop dressed in White 'we had the impression that it was the Holy Father'.”

— The statement to see an external scene as “in a mirror” does not make sense. A mirror is useful only to see oneself. It is completely useless to see an outside scene. Try to admire a landscape through a mirror. Yet the official secret presents an external scene.

In her fourth memoir, Sr. Lucia used the comparison of a mirror only to illustrate how the little seers saw themselves. She never made use of the example of a mirror to see an external scene. Indeed, all the scenes presented by Our Lady to the little seers during the apparitions were seen, not as in a mirror, but by the effect of a grace of the Blessed Virgin appearing to them in the form of rays coming from her hands, ”a light so intimate that it penetrated our hearts and the very depths of our souls”, and in this light ”She made us see ourselves in God who was this light, more clearly than we see ourselves in the best of mirrors.”

The visions communicated to the children by Our Lady at Fatima each have a very special meaning, such that each detail in them is of utmost importance: they are prepared by a significant gesture of the Blessed Virgin. Each time (during the visions of the 13th of May, June and July) the Blessed Virgin opened her hands, and, by the light that emanated from them, the scene appeared. By this gesture, She shows that ‘all graces come from the Sacred Heart of Jesus only through her hands’. However, such a gesture is not mentioned in the official secret, which is supposed to find its place after the words of Our Lady at the end of the second secret. In all of the visions recounted by Sr. Lucia, the Blessed Virgin was there to show that She was the origin of this grace of vision. We find none of this in the scene of the official secret.

Another detail is the following: during the visions given to the children by the Blessed Virgin, they were always in ecstasy. After the first vision, it took them some time to regain the normal use of their senses. During the last apparition, Lucia said she did not see the crowd. Again, we find none of this in the official secret.

— Another term used in this sentence puzzles us: ”we had the impression”. Heaven has never left the little seers with an impression. Three times the Blessed Virgin opened her hands and gave them a special grace that enabled them to understand things far beyond the capacity of children of their age. For example, on the 13th of June: ”In front of the palm of the right hand of Our Lady was a heart, surrounded by thorns, which seemed to penetrate it. We understood that it was the Immaculate Heart of Mary”. She did not say ”We had the impression,” but ”we understood.” On two other occasions, there was no question of there being a mere impression: ”... the main purpose of this reflection was to infuse in us a special knowledge and love of the Immaculate Heart of Mary”.

— Finally, there is another inconsistency in the Vatican file of 2000: if, according to the official text, the identification of the bishop clothed in white with the Pope is only an impression of the little seers, then it is not a certitude. Yet the document of 2000 says that it is the Holy Father and even John-Paul II. But the very same document, speaking of the vision of Hell, concerning which the Blessed Virgin says very clearly ”you have seen Hell”, says that it is only an image invented by the children.

— Collecting the blood of martyrs in a watering-can to sprinkle men seems grotesque and almost sacrilegious! A garden utensil, even of crystal, is not a suitable means for a sacred use. Never in the Bible, or in the history of the whole Tradition, has such an image been used. The criterion of fittingness, which is one of the principal criteria of discernment in judging the divine origin of a private revelation, seems to be missing here.

— ”Praying for the souls of corpses” is also a curious expression. A corpse has no soul; it is, on the contrary, a body without a soul. We speak of the soul of the departed or of the dead, both terms designating a complete person, body and soul, but not the soul of a corpse.

In the Vatican dossier exist several falsified documents: a letter dated the 12th of May 1982 and a letter addressed to Mr. Noelker, both falsely attributed to Sr. Lucia. Then, several affirmations by Card. Bertone contradict each other; moreover, the Cardinal puts Sr. Lucia in contradiction with herself (date of 1960 etc., affirmations concerning the Third Secret and the consecration of Russia) thus accusing her of lying or at least of being a confused or mentally unstable person.

According to the rules of historical science, a document containing errors or false statements looses his credibility and is of little or no value for establishing historical facts. 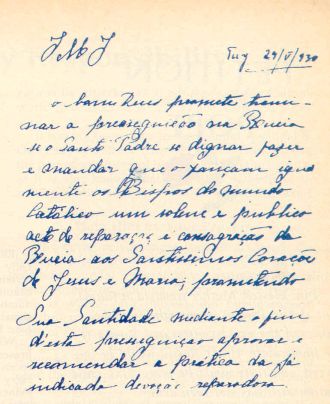