Saint Pius X and the spiritual motherhood of Our Lady

In the mystery of the Incarnation, Mary becomes Mother of all men, because by giving life to the Head of the Mystical Body of Christ, she gives it at the same time to all his members.

In his encyclical Ad diem illum (02/02/1904) Saint Pius X states: “For is not Mary the Mother of Christ? Then she is our Mother also”. From her divine motherhood flows her spiritual motherhood for all men.

He proves this by referring to Mary's role in the mystery of the Incarnation:

“We must in truth hold that Christ, the Word made Flesh, is also the Savior of mankind. He had a physical body like that of any other man: and again as Savior of the human family, he had a spiritual and mystical body, the society, namely, of those who believe in Christ. ‘We are many, but one sole body in Christ’ (Rom. 12:5). Now the Blessed Virgin did not conceive the Eternal Son of God merely in order that He might be made man taking His human nature from her, but also in order that by means of the nature assumed from her He might be the Redeemer of men. For which reason the Angel said to the Shepherds: ‘Today there is born to you a Savior who is Christ the Lord’ (Luke 2:11).

Wherefore in the same holy bosom of his most chaste Mother Christ took to Himself flesh, and united to Himself the spiritual body formed by those who were to believe in Him. Hence Mary, carrying the Savior within her, may be said to have also carried all those whose life was contained in the life of the Savior.”

Therefore, Mary already carried us in her womb as the future brothers of her Son. Undoubtedly, she did not know us then by individual knowledge, but she wanted us as Jesus wanted us to be, and she loved us with the special love with which her Son loved us.

And the Holy Pope concludes: “Therefore all we who are united to Christ, and as the Apostle says ‘are members of His body, of His flesh, and of His bones’ (Ephes. 5, 30), have issued from the womb of Mary like a body united to its head. Hence, though in a spiritual and mystical fashion, we are all children of Mary, and she is Mother of us all. ‘Mother, spiritually indeed, but truly Mother of the members of Christ, who are we’ (S. Aug. L. de S. Virginitate, c. 6)”.

If any motherhood consists essentially in giving and nurturing life, could a true human motherhood be conceived without a special love towards the child? Could it be conceived especially in the Heart of the most perfect mother? Since Mary's love for us is incomparable, let us be worthy children of such a mother and love her in return with constant and faithful love. 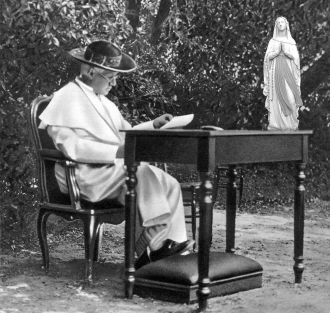