Our Lady and Padre Pio

On April 24, 1959, the Pilgrim statue of Our Lady of Fatima visited Italy, starting from Naples. On the same day, Padre Pio became very ill. He had broncopneumonia and could not celebrate Mass. On August 01, Padre Pio an in-patient at Casa Sallievo, regained some strength but the illness persisted. On August 05, the statue came to the Convent. On August 06, the statue was just leaving in a helicopter. From the hospital, Padre Pio pleaded, “Madonna, my Mother, I have been sick since you came to Italy; and now you are leaving, and leaving me sick.”

On August 10, Padre Pio resumed celebrating Mass, and on the 21st he resumed hearing confessions.

Padre Pio said many times: “I wish I had a voice loud enough to tell all the sinners of the world to love Mary. She is the ocean across which one must travel in order to reach Jesus.” Above Padre Pio’s door were the words: “Mary is the reason of all my hope.”

Father Tarcisio Zulllo once asked Padre Pio: “Father, is the Madonna at this moment in this room?” Padre Pio’s answer: “Wrong formulation. You should have asked ‘Did the Madonna ever leave this room?”

One evening, Dr. Kisvarday was taking with Padre Pio in his cell when the light went off. He got up to get a candle. “Where are you going? There is so much light. We don’t need a candle. Don’t you see the Madonna lighting up the cell?” Dr. Kisvarday: “I didn’t see the Madonna, I saw only pitch dark.”

One day, Fr. Pellegrino asked Padre Pio: “Why do you attribute the solution of every problem to Our Lady?” he received this reply: “It is a matter of taste. But I must say, I did not make the choice, She did.” 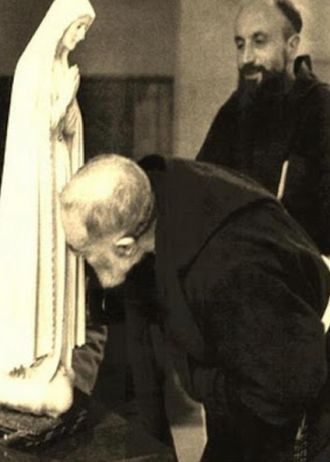 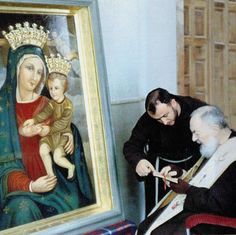