Mary is Queen of the Angels

Lucifer is the Prince of darkness because within the first instant of his angelic existence he turned his powerful intellect away from understanding the mystery of God’s Incarnation and tried to convince the whole heavenly court to adopt another plan. The reaction was as swift as the rebellious proposal, when St. Michael, understanding that the Mystery of the Incarnation surpassed the highest angelic intelligence, rose up in stiff resistance uttering that great battle-cry: “Who is like God!”

When the Incarnation was placed before the Angels, Mary was at its center. Her role in this mystery angered Satan. He foresaw what the Incarnation would mean: the angels serve the Virgin, they would prepare Her birth in various ways and they would announce unto Her the coming of God among men. In serving the God-man, they would serve His Mother too, and this would lead to serving humans in Christ’s Mystical Body. Lucifer clearly understood the position in which he would be placed, and renouncing his own humiliation, he would not bow down to the Queen of angels. Heaven was divided into two camps, those who would serve God’s plan, and therefore, the Queen of Heaven, and those who would not.

But Mary was not the Queen of angels merely as a focal point of God’s plan. Mary became Queen of angels because Her understanding of the Mystery of the Incarnation far surpassed theirs. If Satan would falter so badly, and Michael would rally the good angels by an appeal to God’s Omnipotence, it is clear that Mary’s understanding is far different from theirs. Mary’s understanding came from the Spirit of Truth communicated in greater fullness to Her than to the angels. As the intimate spouse of the Holy Ghost, and the tabernacle in which He would form the masterpiece of Divine Wisdom, the Holy Ghost communicated to Mary the highest degrees of all His gifts. Does not a Spouse reserve for His beloved the best He has of everything? And thus, Mary is Queen of the angels, not only in Her physical position, but in Her intellectual qualities. Her duties and closeness to salvation required a greater understanding of the Mystery of Jesus than any angel would ever possess.

And yet the angels also serve their Queen. On earth, they carried to Her God’s greatest Graces as an armored vehicle carries the treasures of a rich man to his son. In heaven, they carry the power of Her prayers to souls throughout the world. On earth they protected Her from the intrusion of the evil spirits and in heaven they exercise Her wishes against them. She sends them on errands of mercy to convert sinners with angelic inspirations and to thwart the tricks of the devil. Indeed the Catholic Church on earth is a vast kingdom of souls in great need, with a divine task to perform in the midst of grievous spiritual warfare. Mary is the Queen of the Church, who has the whole heavenly army placed by God at Her disposal, for the fulfillment of His designs: “Thy kingdom come, thy will be done, one earth, as it is in heaven!” Ave Maria! 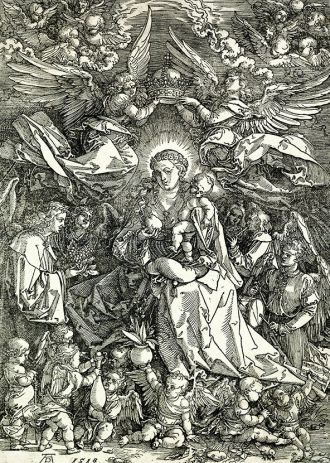