St. Maximilian on the Holy Rosary

Originally the Rosary was called the "Psalter of Mary" because, just as the Psalter of David consists of 150 psalms, so also in the Rosary there are 150 Hail Marys. Legend has it that one fact led to the changing of its name. A devout young man is said to have been in the habit of quite frequently adorning picture of the Most Blessed Virgin Mary with roses. Later he entered the religious life. Inside the friary, he could no longer bring flowers to Mary and that made him very sad. While thus afflicted, he was visited by the Most Blessed Virgin Mary, who told him: "Recite my psalter devoutly and you shall adorn me with the most beautiful of flowers." He therefore began to recite the Rosary and immediately saw that, for every Hail Mary, the Most Blessed Virgin Mary took out of his mouth a beautiful rose and wove a beautiful lily. Hence the denomination "Rosary."

Besides the recitation of the Lord's Prayer and of the angelic salutation, an essential part of the Rosary is also the meditation on the mysteries of the life of Christ and of the Holy Mother of God. The founding document of the Archconfraternity clearly defines the Rosary as "a way of praying with which we honor the Most Blessed Virgin Mary Mother of God by reciting 150 times the 'angelic salutation,' interspersing each decade with the Lord's Prayer and adding the devout meditation on the mysteries of Jesus Christ, our Savior and His Blessed Mother." The Holy Congregation of Indulgences points out that reflection on the mysteries is indispensable to gaining indulgences. To facilitate this reflection, a devout Spaniard, Martin Navarro, who lived in the sixteenth century (1491-1586) added to the single Ave, after the name of Jesus, aa brief reference to the mystery being meditated upon:" An d blessed is the fruit of thy womb, Jesus,] whom thou, O Virgin, conceived by the Holy Spirit; whom thou, O Virgin, brought to Elizabeth ..."

The origin of the Rosary is known to all. A witness at the time, Fr. Tierry of Alpola, Dominican, relates the story. He says that in a certain town St. Dominic could not convert some heretics. He then turned to the Most Blessed Virgin Mary, to Whom he had been very devoted since childhood, asking for help. The Queen of Heaven then showed him the Rosary and instructed him to spread it. He set to work with zeal and from then on, he was able to save easily a large number of misguided souls, so many that they numbered over 100,000 people, in a short period of time. The whole Catholic world received the Holy Rosary with enthusiasm, while countless graces and miracles of conversion attested to its supernatural origin.

The Popes have recommended it highly. Thus, for instance, Adrian VI stated that “the Rosary vanquishes Satan”; Paul III said : “Through the Rosary St. Dominic held the wrath of God away from France and Italy”; Julius III declared: “The Rosary is the ornament of the Roman Church”; Gregory XIV: “The Rosary is eradication of sin, recovery of grace, growth of the glory of God”; Paul V: “The Rosary is a treasure trove of graces”; Urban VIII: “Through the Rosary the number of most fervent Christians increases”; Pius IX: “If you want peace to reign in your hearts and in your families, gather every evening to pray the Rosary”; and Leo XIII in one of his encyclicals on the Rosary said: “We urge all the faithful most strongly to pray the Rosary publicly in churches or in private homes and in families. As far as they can, may they never leave that holy practice behind.”

Also, the Popes have enriched the Holy Rosary with many indulgences. The faithful may profit especially from the so-called Dominican indulgences and from the indulgences of the Teutonic Knights.

The former obtain 100 days of indulgence for every Our Father and each Hail Mary, as long as at least a third part of the Rosary is recited. This indulgence is granted by the Dominican Fathers or priests who possess, in this regard, a special faculty, obtained from the Apostolic See or by the Superior General of the Dominican Fathers. Anyone may profit from that indulgence in public prayers, under the privilege granted by Pius IX (January 22, 1858), provided that at least one of the people there uses the Rosary beads.

The indulgences of the Teutonic Knights consist of 500 days for each Our Father and each Hail Mary, even if the one who is praying has no intention of reciting a third part of the Rosary. In addition to these, other apostolic indulgences may be gained through a priest who has the special power to grant them. These may be gained even if one does not use the object to which the indulgence is attached, in our case, the Rosary.

According to a general principle, one may not gain several indulgences at the same time. Pius X, however, on January 12, 1907, granted such a right for the indulgences of the Teutonic Knights and the Dominicans.

There is often mention of 15 promises, by means of which the Most Blessed Virgin Mary exhorts the faithful to recite the Rosary. Those who received these promises were St. Dominic and the Blessed Alan de Rupe. 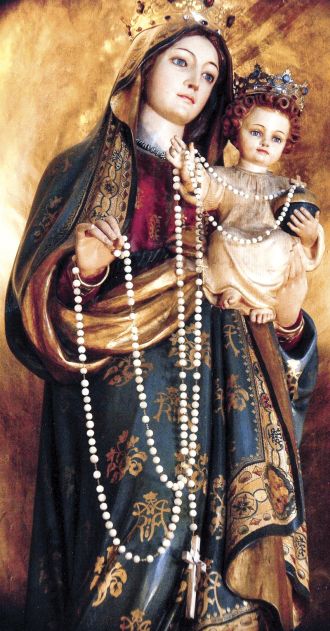