Dear Knights of the Immaculata!

I am pleased to be able to say a few words to you again on the anniversary of the founding of the M.I. 102 years ago today. St. Maximilian Kolbe founded the M.I. because he wanted to trust in the Immaculata alone, since she is the victor in all the spiritual battles between God and the devil that he saw taking place before his eyes. Since the founding of the Militia Immaculatæ, the struggle for souls in the Church and in the world has intensified. As the devil does not have much time left to wreak havoc, he seems to have mobilized all his forces and to be overwhelmingly superior.

However, the history of the Church over the centuries, especially in the last 100 years, has confirmed this fact: the greater the plight of Christianity, the closer the Heavenly Mother is to her children on earth to guide them in battle, to encourage them in this combat, and to give them the necessary means with which to fight. Thus, in the last 200 years there have been more Marian apparitions than ever before, with one thing in common: the Mother of Heaven wakes her sleeping children, warns them of the seriousness of the situation and, together with the devotion to her Immaculate Heart, gives them the Rosary as their "last remedy" (Fatima), as the "only weapon that will remain for the faithful in the announced times of tribulation" (Akita).

The Rosary is not just any human prayer, but in the plan of Divine Providence, it is THE weapon of Heaven which Our Lady entrusted to St. Dominic. The devil has tried throughout the centuries to undermine faith in the heavenly origin of this prayer, to obscure all traces of its history. This has led some to the false belief that the Rosary should only be regarded as a purely human prayer of some "sisters of prayer".

Nonetheless, the truth about the heavenly origin of the Most Holy Rosary of the Blessed Virgin Mary has not only been emphasized time and again by the Popes, but by Heaven, which also revealed it to various saints and even "burned" the truth indelibly for all to see in stone, such as at Las Lajas, Colombia, where Our Lady appeared in 1754 and left a life-size picture on a rock showing how she gave the rosary to St. Dominic!

The weapon of the Most Holy Rosary has proven itself wonderfully in the history of Christianity, especially in seemingly hopeless situations. It is the weapon of David, comparable to his slingshot (Pius XII). As with David’s slingshot, it takes humility and trust in God on the part of Catholics to rely on the Rosary as a weapon, especially in difficult situations.

Our patron, Saint Maximilian, described the Rosary as the sword of the Knight. The popes have often called the Most Holy Rosary “the weapon of Christianity”. For example, Pope Pius XI in his encyclical Ingravescentibus Malis called the Rosary the most powerful weapon of the Church. Moreover, this same Pope confirmed that the Rosary is the most powerful weapon for the expulsion of diabolical powers, for the preservation of a holy life, for the easier attainment of virtue, and finally, as a means of peace among men.

Countless faithful who have devotedly and diligently adhered to the Rosary have experienced for themselves what was promised to us in Fatima: that the Rosary has been given a new efficacy for these last times and that with it, there is no problem we cannot solve.

However, a weapon that is often used can become blunt and therefore requires maintenance: this weapon must be sharpened time and time again to render it “fresh”. Many of us, undoubtedly, have a good habit of praying the Rosary. However, perhaps a certain routine has crept in imperceptibly. One prays it because it should be prayed, rather than praying the Most Holy Rosary with more trust and consciousness of the efficacy of its power.

When St. Louis and St. Maximilian write of the Rosary, they always mean all 15 mysteries. Otherwise they write of the five mysteries of the Rosary, or of the one part of the Rosary. St. Louis himself encouraged sinners to pray the whole Rosary. When the ranks are wearing out in a battle, the remaining warring forces must show an even greater commitment to attain victory while compensating for the loss of the worn-out ranks. Therefore, we are called to pray the Rosary with ever greater zeal and with ever greater frequency to attain victory when many have been “worn-out” or ensnared by the devil.

That being said, not only can the weapon suffer damage, but the fighters can also become weak or even be infected by the spirit of the enemy. Pope Pius XI continues in his encyclical: "With the Marian rosary we will not only prostrate the haters of God and enemies of religion, this prayer will also spur us on and warm us to a quest for the virtues of the Gospel. It will strengthen the Catholic faith in particular; for the contemplation of the holy mysteries raises the spirit to the truths revealed by God."

It is not necessary to point out how salutary this is in our day, when there is often a certain indifference to matters of the Holy Ghost and a regrettable boredom in the proclamation of Christian doctrine. The prayer of the Rosary will then strengthen our longing for immortal goods, and the contemplation of the glory of Christ and his Mother in the last part (the Glorious Mysteries) of the Rosary will openly reveal Heaven to us and thus spur us on to reach the eternal Fatherland.

And while the hearts of men burn with an unbridled addiction to the trappings of this earth and while they become greedier for frail riches and transient pleasures day by day, the prayers of the Rosary are drawn to the heavenly treasures "which no thief dares to possess, and which no moth consumes" and which will remain constant.

Consider the great extent to which love has become cold and extinct among many today! Shouldn't all these people be rekindled with love when they contemplate compassionately the sufferings and death of our Saviour and the sorrow of his afflicted Mother, Mary? From this love of God a greater love for one’s neighbour will necessarily follow; for the consideration of what Christ the Lord had to endure in pain and suffering in order to restore the lost filial bond with God necessarily gives a powerful impetus to love of one's neighbour.

The coming year will be a year of special anniversaries: on the 6th of May, the Militia Immaculatæ of Traditional Observance will celebrate the 20th anniversary of its re-establishment according to the original statutes of our Founder. At the end of October 2020, Catholic tradition will celebrate the 50th anniversary of the Priestly Fraternity of Saint Pius X in Lourdes. So I would like to propose a Year of the Rosary for all the Knights. From today’s founding day of the M.I. to the anniversary celebration of tradition in one year's time, we want to intensify the prayer of the Rosary in the M.I.

Here is how we, as Knights, can celebrate the Rosary more intensely in this upcoming year:

- By more frequent prayers: as far as we can fit it in with our professional duties, we should want to try to pray the whole Rosary (Psalter) more often, that is, all 15 mysteries. We can do this by praying one or the other part during the day in addition to the Rosary which we may pray as a community. Those who do not yet have the good habit of praying the Rosary every day should acquire it.

- By more confident prayers: let us remember the many manifestations of the power of this prayer and the many promises of Our Lady; let us read something about the Rosary to strengthen our convictions; let us ask Our Lady for a greater trust and faith.

- As Knights of the Immaculata in our own environment: we have good flyers, brochures and rosary sets in various languages, which are available from the secretariats of the M.I.

It goes without saying that these are only suggestions that appeal to your generosity. Let us not forget: we are as holy as our habits! May every Knight this year make it a habit to always carry a rosary with him and to use his weapon as often as possible during the day.

May the Queen of the Holy Rosary grant us the necessary graces for these intentions, and may she richly bless all of you in this year of grace!

With my priestly blessing, 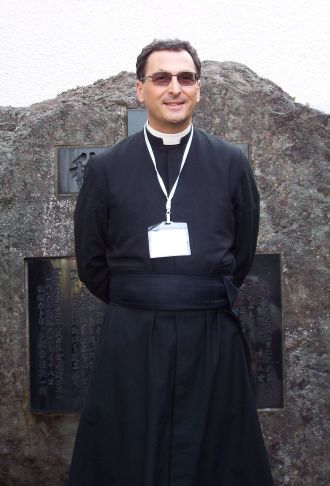