'We will not have you ignorant, brethren, concerning them that are asleep, that you be not sorrowful, even as others who have no hope,' [1 Thess. iv. 13] The Church today has the same desire as the Apostle thus expressed to the first Christians. The truth concerning the dead not only proves admirably the union between God's justice and His goodness; it also inspires a charitable pity which the hardest heart cannot resist, and at the same time offers to the mourners the sweetest consolation. If faith teaches us the existence of a Purgatory where our loved ones may be detained by unexpiated sin, it is also of faith that we are able to assist them; and theology assures us that their more or less speedy deliverance lies in our power.

Purgatory is not eternal. Its duration varies according to the sentence pronounced at each particular judgment. It may be prolonged for centuries in the case of the more guilty souls, or of those who, being excluded from the Catholic communion, are deprived of the suffrages of the Church, although by the Divine mercy they have escaped Hell. But the end of the world, which will be also the end of time, will close for ever the place of temporary expiation.

By the practice of Indulgences, she places at their charitable disposal the inexhaustible treasure accumulated, from age to age, by the superabundant satisfactions of the Saints, added to those of the Martyrs, and united to those of our blessed Lady and the infinite residue of our Lord's sufferings. These remissions of punishment she grants to the living by her own direct power; but she nearly always approves of and permits their application to the dead by way of suffrage — that is to say, in the manner in which, as we have seen, each of the faithful may offer to God who accepts it, for another, the suffrage or succour of his own satisfactions. Such is the doctrine of Suarez, who adds that an Indulgence ceded to the dead loses nothing either ot the security or of the value it would have had for ourselves who are still militant.

Now, Indulgences under every form are continually coming in our way. Let us make use of our treasures, and exercise mercy towards the poor suffering Souls.

Plenary Indulgences for the Souls in Purgatory 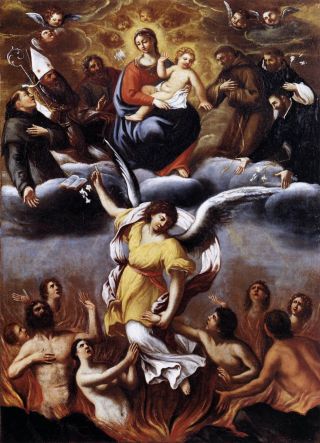