Towards the end of October 2019, the Director of the M.I., Fr. Karl Stehlin visited England. The purpose of the visit was to give two conferences and to meet the priests of District GB & Scandinavia. The visit was very fruitful.

Father Stehlin gave two presentations: one in the London chapel and the other at St. Michael’s School in Burghclere. Both conferences touched on the tasks of the Knights. The burden on us as Knights is not heavy but we must act as follows:

2. offer our sufferings in penance for the souls of sinners;

3. distribute the Miraculous Medal through which there are many conversions;

Father Stehlin urged us all to step up our involvement in this particular action. Do not say: “Oh somebody might tell me where to go” or “I am too shy to approach a stranger” or “I’ll think about it.” Just do it, and the more you do it the easier it becomes. It is through these sacramentals that the Immaculata channels her graces into the souls of all who accept them, and we as Knights are the instruments through which these opportunities come to pass.

After each of the conferences was the enrolment ceremony. In London the M.I. was enriched with 20 new Knights and in Burghclere — 13.

Father Director met with all the District priests at the end of his visit. This meeting was organized Fr. Robert Brucciani — the District Superior for GB & Scandinavia. The meeting took place in the Retreat House in Bristol.

Father Stehlin underlined the importance of the M.I. mission for the faithful in each chapel and church. He also mentioned the numbers of Novus Ordo Catholics who have decided to embrace Tradition after having encountered M.I. literature and/or Miraculous Medals. Father Stehlin spoke about the part that could be played by the priests of the District in propagating the M.I. Apostolate in its overarching role as the Immaculata’s Army for the saving of souls for her Son. 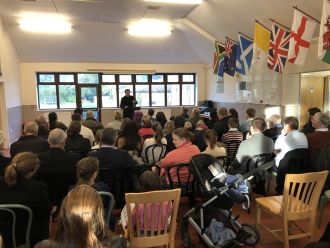 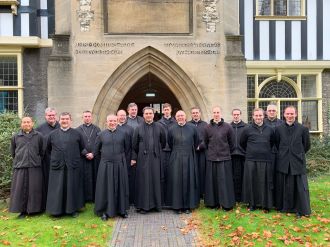