The memorial of St. Francis Xavier

December 3 is the memorial of St. Francis Xavier (1506–1552), one of the greatest missionaries of all times. He labored in western India, the island of Ceylon, Malacca, Molucca Islands, island of Mindanao (Philippines) and Japan and China. He converted innumerable pagans.

St. Francis Xavier born in the family castle of Xavier, near Pamplona in the Basque area of Spanish Navarre on Apr. 7, he was sent to the University of Paris 1525. There he met St. Ignatius Loyola with whom he received Holy Orders in Venice in 1537. One of the first companions of St. Igantius Loyola.

Xavier arrived in Goa, India, on May 6, 1542. He came to be admired in that country for his ability to live and work side by side with the poor. He labored in western India, the island of Ceylon, Malacca, Molucca Islands, island of Mindanao (Philippines). On August 15, 1549, Xavier landed at Kagoshima, Japan. As he had at his other missions, Xavier adapted to local mores and arranged for the translation of religious texts. These steps helped him reach more converts in the year and a half he spent in Japan.

Xavier's next focus for missionary work was China (1552). He traveled to Sancian (Shangchuan) Island, near Canton, but was not able to access the mainland because borders had been closed to foreigners. Before he could find a way inside the country, illness incapacitated Xavier. He died on the island on December 3, 1552, at the age of 46. His body was then taken to Goa.

Though he passed away at a relatively young age, Xavier had accomplished much in his life. In addition to being a founding member of the Jesuit order — the Society of Jesus was officially recognized by Pope Paul III in 1540 — he baptized an estimated 30,000 people. Xavier was beatified by Pope Paul V in 1619, and canonized by Pope Gregory XV in 1622. A famed missionary himself, he is now the patron saint of missionaries. 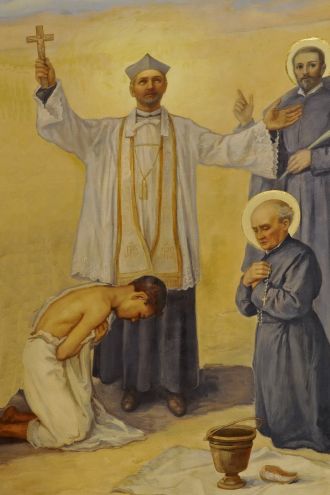