Nine days on the Nigerian roads and 868 Knights

Father Karl Stehlin’s coming to Nigeria seemed like a distant impossible dream for the Knights who had acquainted themselves with Father’s books in order to better understand the spirituality behind the M.I. and to know the personality behind the writing.

When it finally became clear that our dreams of Father’s visit were coming into reality, our Prior genuinely worried about the inconvenience which Fr. Stehlin would undergo to find his way to all the chapels in Nigeria, but thanks to Divine Providence, and Father’s zeal, he was enabled to go anywhere, by any legitimate means.

Coordinators of the SSPX Chapels were busy preparing their potential Knights. Of the preparatory booklets that were sent, some had to be photocopied after permission was granted because there were not enough to go round.

The M.I. Corners were redecorated or cleaned and rearranged, and there was some healthy competition going on for the best M.I. Corner and the best organized welcome.

Lagos Chapel was the first to receive Father. He gave an initial conference before Mass and a sermon during Mass. It was said that, after Father’s Conference, just before the enrolments, people got up with great enthusiasm to be enrolled.

It was said that Father’s conference on that day was like a commander giving his troops a motivational speech before they entered into battle.

Lagos had 73 enrolments of new Knights.

Abuja welcomed Father Stehlin with the same joyful eagerness. 38 Knights were enrolled. Father barely had time to get ready for the journey to Makurdi.

In Makurdi, the chaplain of the Oratory of St. Patrick was up to his neck in work with the faithful, in the chapel trying to raise the M.I. banner in a strategic place, and making sure everything was ready for the enrolments, as well as the faithful. As was expected, after an hour plus there was no space for seating.

During the enrolment ceremony, as the lines kept moving forward, more enrolment forms had to be printed to keep pace with the crowd and this was reckoned to be over 400, and eventually Father had to stop because the Miraculous Medals allotted for that day had run out. A supplementary day of enrolment had to be set up to handle all those who did not get to be enrolled at Saint Patrick’s on that day. Finally, in Makurdi Fr. Stehlin enrolled 433 Knights.

The next day, Father Patrick kindly drove Fr. Stehlin to another part of Benue to the Immaculate Conception Secondary Girls’ School where Father enrolled 59 young Knights between the ages of 11 -17 years.

Then a 30 minute drive on another rough road was made to a Church in Oju where Fr. Stehlin enrolled 175 Knights.

The drive to Enugu was adventurous. Bad roads. On arriving in Enugu, Father’s cassock and bags were bathed in such dust that one would agree that he had a noteworthy apostolate.

Father Stehlin gave 2 conferences and a sermon. He enrolled 24 Knights. As is always the case, there was satisfaction showing on the faces of the new Knights.

Students from the Federal University of Technology of Owerri embarked on a journey to the chapel in Onitsha. There Fr. Stehlin enrolled 44 Knights.

It was the end of the visit by Fr. Stehlin to Nigeria, but a great enhancement of the M.I. apostolate in that country. Let us pray for the new Knights in Nigeria for them to remain as zealous as on the day of their enrolment.

Maria Dolores, Co-ordinator of the M.I. in Nigeria 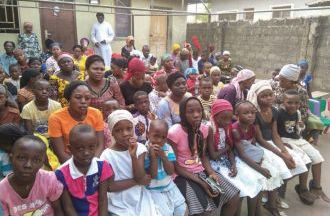 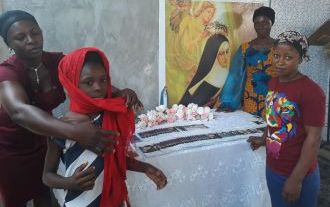 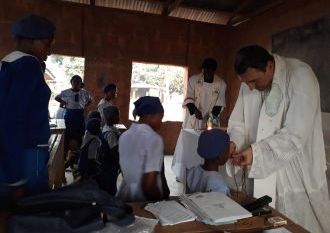 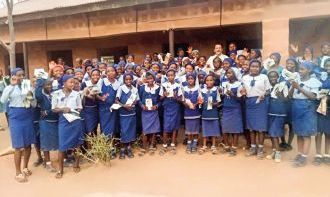 Young Knights in the School 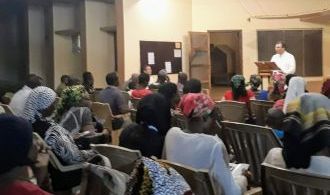 Students from the Federal University of Technology of Owerri with Fr. Stehlin 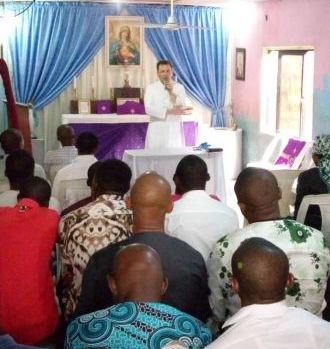 Conference in the Immaculate Heart of Mary in Port Harcourt 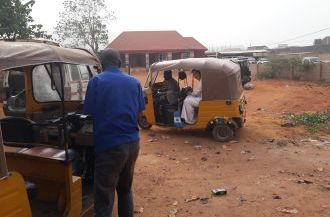