“The angel Gabriel was sent by God to a town in Galilee called Nazareth, to a virgin betrothed to a man named Joseph, of the house of David, and the virgin's name was Mary.”

Let us read and reread this text, tirelessly. It is a masterpiece.

These incomparable lines are both sublime in their majesty and disarmingly simple.

Majesty and simplicity: how was it possible to unite to such an extent, and above all with such fittingness, two qualities so apparently irreconcilable?

When the liturgy describes the mystery of the redemptive Incarnation, it exclaims: God restored peace to men by reconciling in Himself the extremes; by joining in Himself the lowest realities with the highest: in Latin, “ima summis”.

Thus, what the Word of God achieved in the masterpiece of the Incarnation, hypostatically uniting the poverty of His human nature and the sublimity of His divine nature, He himself tells us in the Gospels with an accurate eloquence which admirably underlines the contrast of the masterpiece itself.

The Archangel is sent as an ambassador, appointed by the Most High to carry the most solemn message that can be conceived, to the woman chosen and blessed among all, to that dazzling summit of holiness, the future Mother of God and the Queen of the universe… But then he goes to a poor village in Galilee, to that Nazareth despised for its darkness, where lives a simple virgin who is engaged to a poor carpenter of the city.

This Virgin is presented to us in the simplest and most ordinary way: Her name was Mary... And yet Her beauty delights God, who put in Her the most marvelous perfections, and made Her a treasure of grace and virtue...

Her name is only given to us at the end: a long procession of details precedes it, as if we were only guessing it from afar, moving towards it only very gradually, and as if impressed by the distance that separates us from it. After having crossed paths with St. Joseph, we finally discover Her little by little, all illuminated by the royal ancestry of her future husband. In the company of the noble archangel, one feels very intimidated to be introduced to such an august person...

But now, far from appearing inaccessible, She offers herself to us in the silence of a humble prayer, hidden from the eyes of men, unaware of her splendor. At the Angel’s Hail, full of respect and veneration, but also of love and trust, She suddenly becomes confused, confused by this greeting which She does not understand. She seems so simple and gentle in Her attitude that one almost comes to forget Her supreme dignity.

Then, with words of splendid delicacy, the solemn Annunciation is heard: that of the coming of a son, son of the Virgin and Son of God, Son of the Most High, who will be great, will inherit the throne of David, his father, and who will reign forever: in His reign there will be no end...

Then the echo of the Virgin, in a whisper of adoration, reveals the first fruits of maternal love: "Behold the handmaid of the Lord; Fiat”.

Her modesty seduces us all the more as the announcement was more grandiose...

Later, the sacred author, Fra Angelico would know how to render, with charming grace, the striking contrasts of this scene.

It is up to us to imitate them. What do you mean, imitate them? Quite simply by reciting our Rosary, by praying these Hail Marys that we finger one by one. Let us approach the Virgin with respect and veneration, as well as with ease and love.

And so let us honor Her majesty with our humility; Her simplicity with our trust. 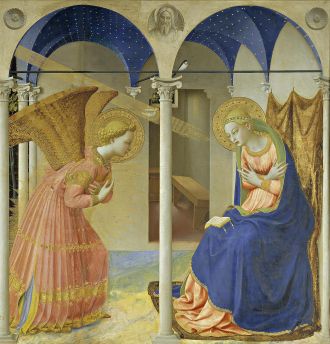