“Behold your Mother”: The mystery of the divine sweetnesses

The words of Jesus perform what they signify. In Naim, He touches the coffin on which the dead man is carried away: “Young man, I say to you, arise!” And the dead man sat up and began to speak. At Bethany, having prayed to His Father, He cried out in a loud voice: “Lazarus, come forth!” And the dead man came forth.

The word of Jesus on the cross to his Mother comes to meet her desire to give her life with her Son for the salvation of the world. By saying to his Mother: “Woman, behold your son”, He opens Her maternal womb to the universal distress of humanity. He makes it possible for Her, as much as the holiest creature can, to bring to life, in Him and after Him, all those souls for whom He alone, being God, can wash away their sins in the blood of the Cross.

To St. John a happiness, a sweetness will be given, which he never imagined he could hope for. He will be so close to his God that he will have to look like his mother, the very Mother of his God. The words of the Savior: “Behold your mother” come to inaugurate and to establish in his heart a love, unknown to all previous ages, but destined to pass from that time on into the hearts of the poorest disciples, and through which they become so much the brothers of the Savior that his Mother becomes their mother: “Holy Mother of my God, who for me, wretchedly, is a mother, my mother!”

“And from that hour the disciple took her into his own.” That is, into his intimacy. We can translate: “in his home”, or literally: “in his possessions”. She is entrusted to him less as a woman to be protected than as a mother to be venerated. And even more secretly than his temporal abode, it is the abode of his heart that the beloved disciple opens to the Mother of his God. It is She who gives and he who receives. Origen said that “No one can receive the Spirit unless he has rested on the breast of Jesus and received from Jesus, Mary for his own mother”.

What sweetness of Jesus towards His Mother to give her as children, in the person of the beloved disciple, those for whom He sheds the blood of His redemption! What sweetness of Jesus towards the beloved disciple, in whom are represented all those who, near or far, will welcome the warnings of divine love, that He gave them for a spiritual Mother his own Mother! Behold, the tenderness of heart of the Mother of God will be poured out upon the misery of the children of Adam, behold, they will become brothers of Jesus, not only because they will have God as their Father through adoption, but also because they will have Mary for Mother through Her universal redemptive compassion. 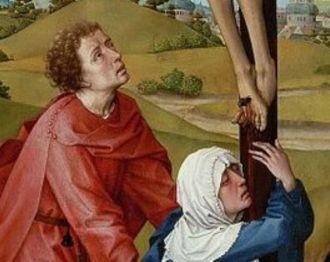