“Can anyone imagine a more terrible spiritual torment than Mary’s compassion during the crucifixion of her Son? His fear and affliction were a sword that pierced her heart, as Simeon had prophesied at the presentation of Jesus in the temple. If our Lord Himself in Gethsemani found the prospect of His sufferings so unbearable that it wrung drops of blood from Him and His soul convulsed His sacred body, then this gives us an image of the extent to which Mary’s spiritual pain affected her body and caused her martyrdom. Mary’s heart and soul must have melted away as she stood beneath the cross of her Son and when at last the lifeless body was placed upon her lap” (Cardinal Newman).

From the hour of the Annunciation on, a terrible, impenetrable darkness shrouded her life, which she became increasingly aware of from month to month. She knew that the future concealed unspeakable sufferings, but she did not know what or when they would be. Yet she knew the words of the prophet, the image of the Messiah as the Man of Sorrows, and therefore, as the wisest of all virgins, she immediately understood at the Annunciation by the angel that he child would be a child of sorrow. Aged Simeon confirmed this knowledge with unprecedented impact: He would be a sign of contradiction - her soul would be pierced by a sword. The twelve-year-old boy with His puzzling behavior and His majestic answer veils the threatening future even more darkly. The years of His public ministry bring her increasing interior distress about the ultimate outcome, which Jesus’ predictions suggest in bleak outline. Mary’s path through life passed through incomparable darkness.

Why should the Our Lady bear this dark uncertainty as a cross throughout her life? During His entire life, the New Adam saw the terrible end looming before Him, as clear as a vision, and with His head held high He made His way to Jerusalem. In this He stood on a plane that was far above all human paths.

Yet the ordinary human fate that causes the poor human heart to constrict so horribly, the onward march into the darkness, was to find its example and its source of consolation in the mystery of redemption as well, and probably for this reason the New Eve had to endure this suffering at His side. It is the heroism of abandonment to the uncertain will of the Most High.

For Mary, too, the darkness was lightened on Golgotha when she recognized her last sacrificial duty: to offer up the most precious of all precious gifts, the Price of Redemption which also belonged to her as her own possession, and to have it brutally taken away from her. The Crucified who hung there before her eyes was the spotless Lamb of sacrifice, to whom she had given the pure and beautiful Body that was now so disfigured. In the harmony of His disposition and spiritual gifts, in His strength and gentleness, He is the ideal image of human perfection; she saw this miracle unfold and extended to Him a maternal hand as He walked the paths of His childhood. And now that He has reached the state of magnificent manhood, she gives Him away as an offering, says her Yes to the immolation of this precious sacrifice, freely consents to this loss, which is unimaginably bitter to her. Thus, she accomplishes a heretofore unprecedented regal act of heroic greatness: in union with the King of Sorrows, she turns sorrow itself to the greater glory of God, for the salvation of the world. 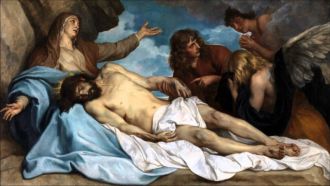