The Mother of Sorrows, Our Coredemptrix

If that is true for every mother, then it is preeminently true for the Mother of God. All that she was and had, she passed on to her Child. She was created exclusively for Him: the honor, happiness and life of her Son were infinitely more important to her than her own honor, happiness and life. To kill Him was, for her, something worse than if she herself were to be killed. Now Mary surrendered all this as a holocaust for the honor of the Father and for our salvation. Two lives, two beings, two hearts are united here in a single sacrificial offering, because her will had merged entirely with His will. Thus, there is no redemptive work of Christ without Mary’s compassion.

Moreover, in her compassion, Mary is, as it were, a complement of the Crucified. She allows Christ to expand His sacrifice into her, into the deepest recesses of her soul. St. Bernard suggests this when he says, “After Jesus had given up the ghost, the cruel spear that tore open His side clearly did not touch His soul, but it did pierce your soul. For surely His soul was no longer there, but yours could not be torn away.” We know, too, that even in His most intense suffering, the higher powers of Christ’s soul retained the beatific vision. Mary, however, experienced the mystery of the cross entirely in faith, hope and love. She is able to present to the High Priest her condition as the sacrifice of an immaculate creature, a condition that He Himself cannot experience, because He, the Son of God, is God and as such possesses neither faith nor hope.

Through her complete faith, the deepest component of human intelligence can be sacrificed at the cross. Indeed, through our understanding we can offer to God “reasonable service” or “spiritual worship” (rationale obsequium) [cf. Romans 12:1], by living entirely by faith. Mary remains standing beneath the cross and endures, because she possesses perfect faith. To all appearances, everything seems to contradict the promise of the Archangel Gabriel. Christ on the cross is not accepted but rejected by His people, and He is far from ruling over the House of Jacob. But Mary does not argue or doubt and does not seek to understand. In charity she unites herself with the will of the Father. This will is her only light. Thanks to this total offering of her contemplative faith, Mary can sacrifice to the Father the deepest, most intimate part of her intelligence: a sacrifice that Jesus Himself cannot offer. This allows us to perceive the greatness of her compassion. And because Mary is our example and model, in whom we all find our ideal and our perfection, the sacrifice of her understanding, which submits to God’s decree in sheer faith, contains also the sacrifice of intelligence of all her children. In her sacrifice reason is cast into the darkest night and as such is offered up in charity: and this sacrificial offering is precisely what is still lacking in Christ’s suffering.

If this is true for reason (through faith), it is just as true for her will, in hope. The deepest desires of the heart of the Immaculata (the honor, happiness and good of her dearly-beloved Son) are offered up to the Father in the mystery of her compassion in an act of complete trust. If we reflect that our consciousness of life is realized in our deepest desires, then we can understand somewhat that through the sacrifice of these desires Mary experienced the most terrible mystical death: death by the sword that pierced the depths of her soul, reaching unto the division of the soul and the spirit [Hebrews 4:12]. Everything about Mary is slain, offered to her Father in the sacrifice of Jesus Himself. Through Mary all of human nature, along with the most profound and personal things belonging to it, is offered up to the Father for His honor and for the salvation of mankind. 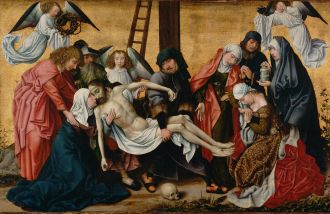