Request to the Pope

Knights of the Immaculate from M.I. 2 — Mission for Russia have provided information about an effort underway for the fulfilment of the request of Our Lady of Fatima to consecrate Russia to her Immaculate Heart.

This effort originally began mid 2019 when Jim Brueggemann, a parishioner at Our Lady of Assumption Church (SSPX) in Walton (USA) hadthe idea of contacting President Trump and suggesting that he attempt to influence the Pope to perform the Consecration as Our Lady requested. Jim had developed a relationship with Matt Bevin (Governor of Kentucky) and so this seemed a logical place to start given Matt’s known relationship with President Trump.

Now the originators are working to pass on information and the request to President Trump.

The Knights are making great efforts to ensure that Russia is dedicated to the Immaculate Heart of Mary. One of the Knights of Great Britain wrote this earlier plea to President Trump at the White House on 6th July 2017: “All that is required is for you, Mr. President, to persuade Pope Francis in union with the Catholic bishops of the world, to consecrate Russia specifically to the Immaculate Heart of Mary in a simple simultaneous ceremony. The consequences of not making the consecration were spelled out in 1917. The outcome of making the consecration, specifically as requested, is global peace. The future of us all lies in the hands of yourself, and Pope Francis, and his bishops, and a simple consecration ceremony. You have nothing to lose, and the gratitude of the world to gain.”

Our Lady of Fatima, pray for us! 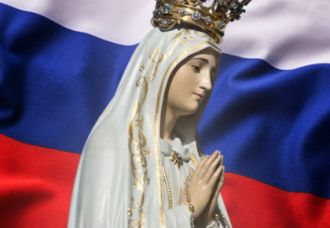