The Feast of Saint Bonaventure

Born in Tuscany in 1225, this frail child was given the name of John at his baptism. He soon fell so ill that his cure was despaired of, and his sorrowing mother had recourse to Saint Francis, recognized everywhere in Italy as a Saint. She promised God she would endeavor to have the child take the habit of the Franciscan Order, if he were cured. Her prayer was granted, the child was cured, and Saint Francis himself gave him his new name. In reference to the miraculous cure, he prophetically exclaimed of the infant, O buona ventura! — O good fortune! Saint Francis died a few months later, not without foreseeing the future of this little one, destined to be a seraph of love like himself. Saint Bonaventure is titled the Seraphic Doctor, from the fervor of divine love which breathes in his writings.

Sanctity and learning raised Bonaventure to the Church's highest honors, yet at heart he was ever the poor Franciscan friar, who practiced and taught humility and mortification. He was the friend of Saint Thomas Aquinas; they received the Doctor's cap together in Paris.

Bonaventure gave ordinances, prescribed that at nightfall a bell should be rung in honour of the Annunciation, a pious practice from which the Angelus seems to have originated. In year 1264 he founded at Rome the Society of the Gonfalone in honour of the Blessed Virgin which, if not the first confraternity instituted in the Church, as some have claimed, was certainly one of the earliest.

Saint Thomas asked him one day from what source he drew his great learning; he replied by pointing to his crucifix. Another time Saint Thomas found him in ecstasy while writing the life of Saint Francis. The Angelic Doctor said, while retiring quietly, Let us leave a Saint in peace, to write of a Saint!

At the age of thirty-six Saint Bonaventure was made General of his Order. In 1265 he only escaped another dignity, the Archbishopric of York, by dint of tears and entreaties to the Holy Father Clement IV. When he learned of Pope Gregory X's resolve to create him a Cardinal, he quietly made his escape from Italy, and in France began to compose a book. But Gregory sent him a summons to return to Rome. On his way, he stopped to rest at a convent of his Order near Florence; and there two Papal messengers, sent to meet him with the Cardinal's hat, found him washing the dishes. The Saint asked them to hang the hat on a nearby bush, and take a walk in the garden until he had finished what he had begun. Then taking up the hat with unfeigned sorrow, he joined the messengers, and paid them the respect due to their character.

He was the guest and adviser of Saint Louis, and the director of Saint Isabella, the king's sister. He sat at the right hand of Pope Gregory X and presided all sessions at the Council of Lyons, assembled to provide for the reform of morals and the needs of the Holy Land, and to cement the union of the Greeks with the Roman Church. The piety and eloquence of Saint Bonaventure won over the Greeks to Catholic union, but his strength failed suddenly, the day after its closure. He died on the 15th of July, 1274, and was buried by the assembly of the Council members, still in Lyons; he was mourned by the entire Christian world.

Quotes about Our Lady by St. Bonaventure:

"Mary seeks for those who approach her devoutly and with reverence, for such she loves, nourishes, and adopts as her children."

"Men do not fear a powerful hostile army as the powers of hell fear the name and protection of Mary."

Blessed is the man, O Virgin Mary, who loves thy name; thy grace will comfort his soul.

He will be refreshed as by fountains of water; thou wilt produce in him the fruit of justice.

Blessed art thou among women; by the faith of thy holy heart.

Thy mercy and thy grace are preached everywhere; God has blessed the works of thy hands.

Glory be to the Father, etc.

“The Psalter of the Blessed Virgin Mary” by St. Bonaventure 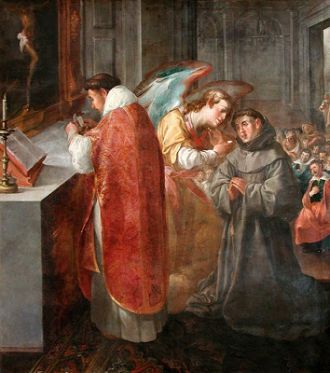