Feast of Our Lady of Mount Carmel

This Feast commemorates the favors granted by Our Lady on Mount Carmel. On July 16, 1251 the Blessed Virgin Mary appeared to St. Simon Stock, General of the Order of Carmelites, holding in Her hand the form of a scapular.

According to the most ancient Carmelite chronicles, the Order has its origins with the disciples of the prophets Elias and Eliseus. They lived in caves on Mount Carmel. They honored the Queen of Heaven as the Virgin who is to give birth to the Saviour. When the reality replaced the symbol, the pious ascetics of Carmel were converted to the Christian Faith. In the 12th century, many pilgrims from Europe who had followed the Crusaders came to join the solitaries. A rule was established and the Order began to spread to Europe.

Amid the many persecutions raised against the Order of Mount Carmel, newly arrived in Europe, Saint Simon Stock, General of the Order, turned with filial confidence to the Blessed Mother of God. As he knelt in prayer on July 16, 1251, in the White Friars’ convent at Cambridge, She appeared before him and presented him with the well-known brown scapular, a loose sleeveless garment destined for the Order of Carmel, reaching from the shoulders to the knees. It was given as an assurance, for all who died wearing it, of Her heavenly protection from eternal death. An extraordinary promise indeed, but one requiring a life of prayer and sacrifice.

The full promise of Our Lady of Mount Carmel to Saint Simon Stock July 16, 1251:

“Accept this Scapular. It shall be a sign of salvation, a protection in danger and a pledge of peace. Whosoever dies clothed in this Scapular shall not suffer eternal fire.”

Devotion to the blessed habit spread quickly throughout the Christian world. Pope after Pope enriched it with indulgences, and innumerable miracles put their seal upon its efficacy. The first of them was worked at Winchester on a man dying in despair, who when the scapular was laid upon him by Saint Simon Stock at once asked for the Sacraments.

In the year 1636, a certain gentleman, member of a cavalry regiment, was mortally wounded at the battle of Tehin, a bullet having lodged near his heart. He was then in a state of grievous sin, but he had time to make his confession. Afterwards a surgeon probed his wound, and the bullet was found to have driven his scapular into his heart. When it had been withdrawn he soon expired, making profound acts of gratitude to the Blessed Virgin who had prolonged his life miraculously, thereby preserving him from the irremediable death of his soul.

At Lourdes in 1858, the Virgin chose to make Her last apparition on July 16th, feast of Our Lady of Mount Carmel, the day the Church commemorates Her apparition to Saint Simon Stock. And at Fatima on October 13, 1917, it is as Our Lady of Mount Carmel that Mary appeared when She said farewell to the three children. Throughout the ages, the Queen of Carmel has always kept a faithful watch over the destinies of Her cherished children on earth. 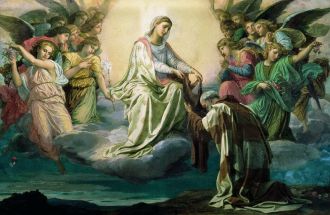 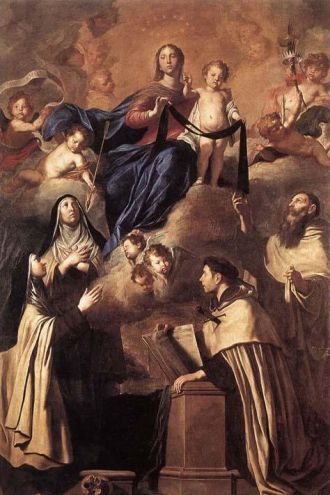 Our Lady give the scapular to St. Simon Stock