The first apparition in Saint Catherine's own words:

Finally, at half past eleven in the evening I heard myself being called by name: 'Sister Labouré Sister Labouré’ Waking up, I looked in the direction where I heard the voice... I pulled aside the curtain. I saw a child four or .five years old, who said to me: 'Come to the chapel, the Blessed Virgin is waiting for you.'

I dressed quickly and made my way alongside this child, who had remained standing, without coming any further than the head of my bed.... I followed him, keeping him always on my left. Everywhere we passed was lighted up, which astonished me a lot. But I was even more surprised when I went into the chapel and the door opened itself; though the child had scarcely touched it with his fingertips. My surprise was even more complete when I saw that all the tapers and candles were alight, which reminded me of the Midnight Mass. However, I saw nothing of the Blessed Virgin.

The child led me into the sanctuary; to the side of the director s chair, where I knelt down, while the child remained standing the whole time. As I found the time rather long, I looked around to see if the sisters who kept watch in the house were passing through the gallery.

At last the time had come. The child let me know He said to me, 'Here is the Blessed Virgin. Here She is!' I heard a sound like the rustle of a silk gown coming from the side of the tribune near Saint Joseph's picture, which finally came and alighted on the altar steps on the gospel side and went to sit in a chair like that of Saint Anne's.

Catherine continues her account: It was not the same face as Saint Anne... I doubted whether this was the Blessed Virgin. However, the child who was there said to me, 'Here is the Blessed Virgin!' It would he impossible for me to say what I experienced at this time, what was happening within me. It seemed to me that I did not see the Blessed Virgin. It was then that the child spoke to me, no longer as a child, but as a very strong man and in the strongest terms. Then, looking at the Blessed Virgin, I just made one leap towards Her, and knelt down on the altar-steps, with my hands resting on the lap of the Blessed Virgin...

Then there took place the sweetest moment of my life. It would be impossible for me to tell all that I experienced. She told me how I was to behave towards my director and several things which I must not tell, how I was to behave in my troubles, that I was to come (pointing with Her left hand to the foot of the altar) and throw myself at the foot of the altar and there to pour forth my heart, that there I should receive all the consolations that I needed... I then asked Her to explain to me the meaning of all the things I had seen, and She explained everything to me.

You will see a certain thing. Give an account of what you will see and hear. You will be inspired in your prayer.

Come to the foot of this altar. There graces will be poured out on all those, rich or poor, who ask for them with confidence and fervor. I will be with you myself; I will always keep my eyes upon you, and I will enrich you with many graces.’

Graces will be bestowed, particularly upon all who ask for them, but they must pray. They must pray!

I do not know how long I stayed. All I know is that after ‘She had gone’, I only noticed something which was fading away. Finally, no more than a shadow that was moving in the direction of the tribune, the side from which She had come.

I got up from the steps of the altar, and I saw the child where I had left him. He said to me, 'She has gone.' We went back by the same way, which was still illuminated, and this child was always on my left.

I believe that this child was my guardian angel who made him-self visible so that I should see the Blessed Virgin, because I had often prayed to him that he would obtain this favor, for me. He was dressed in white and bore a miraculous light with him, that is to say, he was resplendent with light. He was either four or, five years old.

When I got back to bed, it was two o'clock in the morning, for I heard the clock strike. I did not go to sleep again.” 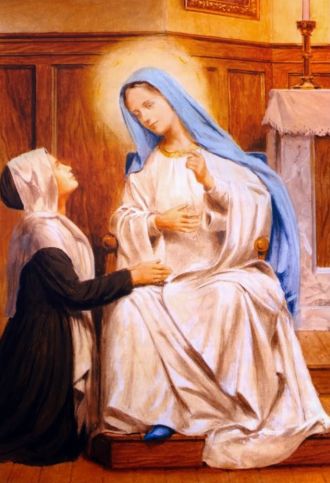 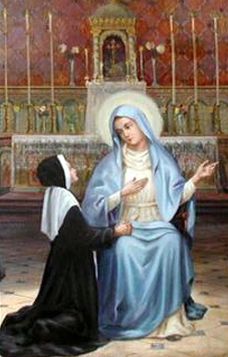 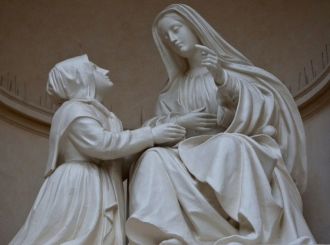