St. Bernard of Clairvaux was born in 1090 in Fontaines, France, in a numerous, moderately comfortable family. As a youth, he spent himself in the study of the so-called liberal arts -- especially grammar, rhetoric and dialectics -- at the school of the canons of the church of St. Vorles, in Chatillon-sur-Seine, and he slowly matured his decision to enter the religious life.

When he was about 20, he entered Citeaux, a new monastic foundation, more flexible than the old and venerable monasteries of the time and, at the same time, more rigorous in the practice of the evangelical counsels. A few years later, in 1115, Bernard was invited by St. Stephen Harding, third abbot of Citeaux, to found the monastery of Clairvaux. Here the young abbot — who was only 25 years old — was able to refine his concept of monastic life, and to be determined to put it into practice. Looking at the discipline of other monasteries, Bernard decidedly reclaimed the need for a sober and measured life, at table as well as in dress and in the monastic buildings, recommending the support and care of the poor. In the meantime, the community of Clairvaux became ever more numerous and multiplied its foundations.

The Vespers Magnificat Antiphon hails St. Bernard of Clairvaux as an “eminent preacher of the Virgin Mother’s glory.” His preaching has earned him other tributes within the Church, such as the “Marian Doctor” and the “Troubadour of Mary.” High Marian praise, Bernard’s Marian corpus comprises roughly 3 ½ percent of his total writings, including his most popular Marian homily Missus Est, or In Praise of the Virgin Mother.

Mary's participation in the Passion of Jesus

In famous sermon on the Sunday between the Octave of the Assumption, the holy abbot describes in impassioned terms the intimate participation of Mary in the redeeming sacrifice of the Son. "O holy Mother," he exclaims, "truly a sword has pierced your soul! ... To such a point the violence of pain has pierced your soul, that with reason we can call you more than martyr, because your participation in the Passion of the Son greatly exceeded in intensity the physical sufferings of martyrdom" (14: PL 183, 437-438).

To Jesus through Mary

Bernard has no doubts: "per Mariam ad Iesum," through Mary we are led to Jesus. He attests clearly to Mary's subordination to Jesus, according to the principles of traditional Mariology. But the body of the sermon also documents the privileged place of the Virgin in the economy of salvation, in reference to the very singular participation of the Mother (compassio) in the sacrifice of the Son. It is no accident that, a century and a half after Bernard's death, Dante Alighieri, in the last canto of the Divine Comedy, puts on the lips of the "Mellifluous Doctor" the sublime prayer to Mary: "Virgin Mary, daughter of your Son,/ humble and higher than a creature,/ fixed end of eternal counsel, ..." (Paradiso 33, vv. 1ss.).

Proposed Mary as a Mediatrix of Grace

Marian intercession serves as an excellent segue to Marian mediation of grace, which St. Bernard writes about. In a homily on the birth of Mary, Bernard compares Mary to an aqueduct which floods the earth with grace. In the same homily, Bernard says, “God has willed that we should have nothing which would not pass through the hands of Mary.” The Marian thought of St. Bernard places great emphasis on the role of Mary in relation to her son and the distribution of graces.

One time St. Bernard prayed before a statue of Mary asking her, “Show yourself a mother.” The statue came to life and squirted milk onto the lips of Bernard. The significance of such an occurrence points to each man being nourished at the breast of Mary, as a sign of Mary’s special protection over him.

The Science of the Saints

These reflections, characteristic of one in love with Jesus and Mary as St. Bernard was, rightly inflame again today not only theologians but all believers. At times an attempt is made to resolve the fundamental questions on God, on man and on the world with the sole force of reason. Instead, St. Bernard, solidly based on the Bible and on the Fathers of the Church, reminds us that without a profound faith in God, nourished by prayer and contemplation, by a profound relationship with the Lord, our reflections on the divine mysteries risk becoming a futile intellectual exercise, and lose their credibility. Theology takes us back to the "science of the saints," to their intuitions of the mysteries of the living God, to their wisdom, gift of the Holy Spirit, which become the point of reference for theological thought.

Together with Bernard of Clairvaux, we too must recognize that man seeks God better and finds him more easily "with prayer than with discussion." In the end, the truest figure of the theologian and of every evangelizer is that of the Apostle John, who leaned his head on the heart of the Master.

Think of Mary, call on Mary

"In danger, in anguish, in uncertainty," he says, "think of Mary, call on Mary. May she never be far from your lips, from your heart; and thus you will be able to obtain the help of her prayer, never forget the example of her life. If you follow her, you cannot go astray; if you pray to her, you cannot despair; if you think of her, you cannot be mistaken. If she sustains you, you cannot fall; if she protects you, you have nothing to fear; if she guides you, do not tire; if she is propitious to you, you will reach the goal..." (Hom. II super "Missus est," 17: PL 183, 70-71).

St. Bernard of Clairvaux composed the famous prayer to the Most Blessed Virgin Mary known as The Memorare.

On Christmas Eve in the year 1146, St. Bernard received a triumphant welcome into the city of Speyer. The German Emperor and the Bishop conducted him into the great German cathedral and down the main aisle in solemn procession, while the choir joyfully sang the beautiful “Salve Regina” ("Hail, Holy Queen”). The fifty-six-year-old Saint no doubt remembered that unforgettable Christmas Eve vision of his boyhood; and then, recalling all the marvelous graces and joys which Mary had given him, and through him to countless others during all those years, as the choir finished with the words "... show unto us the blessed fruit of thy womb, Jesus," St. Bernard cried out in a transport of love and gratitude, genuflecting at each aspiration: "O clement, o loving, o sweet Virgin Mary!"

And as a final reward for his long years of faithful service to her Son, when the great Saint died on August 20, 1153 at the age of sixty-three, surrounded by his heartbroken Brothers, Mary is believed to have again appeared to her Troubadour, welcomed his soul when it left his exhausted body, and conducted him personally to the throne of his King in Heaven. 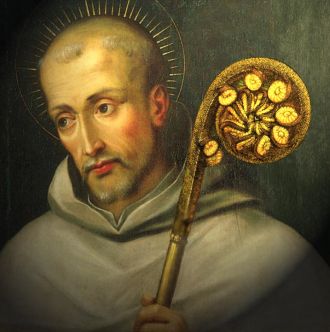 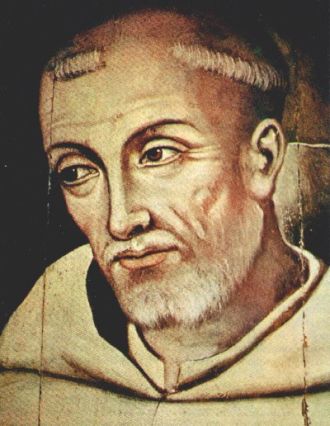 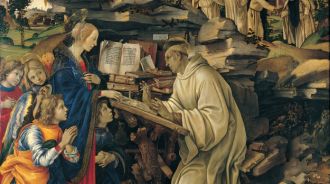 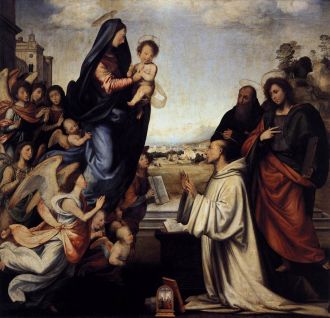 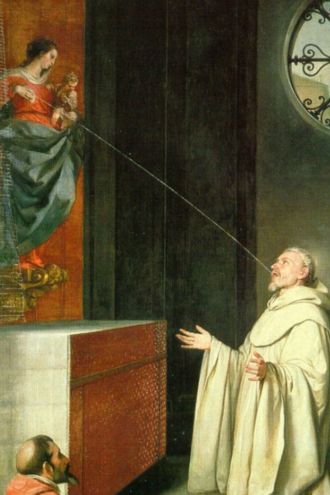 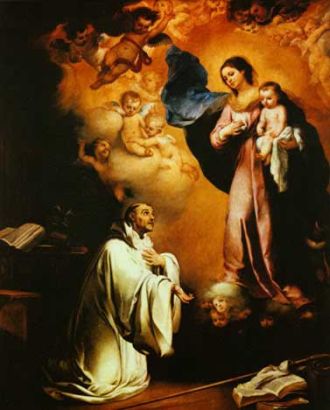