Feast of the Immaculate Heart of Mary

In the 14th century St. Bridget of Sweden had a great devotion to the Heart of Mary. Jesus revealed to her that the Two Hearts of His Mother and His Own were a oneness of love: "The Heart of My Mother was like Mine, We worked together for the salvation of mankind; I by the sufferings of My Body, she by the Sorrows of her Heart."

St. Francis de Sales, in his treatise “On the love of God” elaborated on Mary's love: "Since eternal love is the most ardent of all forms of love, and is an indefatigable and insatiable love, how much must it have been in the Heart of such a Mother and for the Heart of such a Son?" St. Francis promoted this devotion in 1622.

In the 17th, two other saints developed and diffused the devotion, united to the Sacred Heart of Jesus: Sts. John Eudes and Louis Marie Grignion de Montfort. The devotion to Our Lady of the Immaculate Heart grew after the Apparition to St. Catherine Laboure, a Sister of Charity in the Rue de Bac, Paris, in November of 1830; this was the occasion for the Miraculous Medal of the Immaculate Conception. On one side of the Medal is the image of the Cross with Mary's initial, M, on it and beneath the Cross there are two Hearts close by each other, one with thorns encircling it, and the other, pierced by a sword. This was the image of the Sacred Heart and the Immaculate Heart.

Closer to us, the most ardent apostle of the Immaculate Heart is St. Maximilian Kolbe.

The Immaculate Heart appears in flashes of lyric beauty in mediaeval treatises like that of Saint Bernardine of Siena, who saw the seven recorded words of Our Lady as "seven flames from her heart." It became widely recognized when Saint John Eudes told the world how "Jesus, Who is the heart of His Father, and the Holy Ghost, Who is the heart of the Father and of the Son, were given to Mary to be the soul of her soul and the heart of her heart." Later, a petition to the Sacred Congregation of Rites implored: "Let us go to the eternal Father through the Heart of Jesus, and to the Heart of Jesus through the Heart of Mary." Pius IX sanctioned a votive mass of the Immaculate Heart, and in 1946 Pius XII extended the Feast to the universal Church. Since then the observance of the First Saturday has begun to spread, while Confraternities and Guards of Honor offer perpetual prayer and reparation to the heart of the Mother of God who became the Mother of men on Calvary. From Our Lady herself, at Fatima, has come the needed call to prayer and penance.

“Consecrate your parish to the Immaculate Heart of Mary”

Father Desgenettes consecrated his parish in the heart of Paris, Our Lady of Victories, to the Immaculate Heart of Mary in 1836. When he was first assigned to this parish of 40,000 souls in 1832, around 40 people used to go to Mass. The French Revolution had not only destroyed lives and countries, but also, and more deeply, souls! Despite all his efforts, prayers, and sacrifices, Father Desgenettes saw no fruit for years and was greatly discouraged.

On December 3, 1836, a first Saturday, he heard an interior voice telling him during Mass: “Consecrate your parish to the Immaculate Heart of Mary”. Immediately he wrote the Statutes of the Confraternity of the “Holy and Immaculate Heart of Mary for the conversion of sinners.” The members would commit to assist at Mass on the first Saturday and to pray in particular for the conversion of sinners. On Saturday, December 10, Bishop Quelen approved the new confraternity and authorized the beginning of the devotion the next day, the Third Sunday of Advent. To the ten faithful who were assisting at Mass that day, Father Desgenettes announced that, later that very afternoon, he wished the parish to make an act of devotion to the Immaculate Heart of Mary. From that moment, the miracles at Our Lady of Victories never ceased. After Mass, two fathers of families asked for confession. In the evening, 400 to 500 people assisted at the act of consecration. On the following day, M. Joly, the last minister of Louis XVI, who had refused so far to receive the sacraments, agreed to make his confession to his parish priest. In ten days, 214 souls became members of the confraternity, and in April 1838 Gregory XVI made it an archconfraternity for the whole Church. In 1842, there were more than two million members and nine hundred affiliated parishes. In July 1853, Pius IX crowned the statue of Our Lady of Victories parish.

In June 13, 1917 Our Lady had told Lucia: "God wishes to establish in the world the devotion to My Immaculate Heart." In December 1925, Our Lady told Sister Lucy the details of the devotion she was asking for: on the first Saturday of five consecutive months, the offering of a Communion, the Rosary, a 15-minute meditation on the mysteries of the Rosary, and confession made eight days before or after in a spirit of reparation for the offenses against the Immaculate Heart of Mary. To those who embrace this devotion, “I promise to assist them at the hour of death with all the graces necessary for the salvation of their soul.” The Child Jesus showed her the heart of His Mother surrounded by thorns and told her: “Have mercy on the Heart of your holy Mother surrounded by thorns with which ungrateful men pierce it at every moment, without anyone to make an act of reparation in order to take them out.” “You at least,” said Our Lady, “try to console me…”

Two months later, on February 15, the Child Jesus appeared to Sister Lucy and gave her some specific requests for the devotion of the first Saturdays, namely the possibility of receiving Communion on the following Sunday: “The souls who practice the five first Saturdays with fervor and in order to make reparation to the Heart of your heavenly Mother please me more than those who, lukewarm and indifferent, practice them fifteen times.”

In a communication in 1930, Our Lord revealed to Sister Lucy the following: “My daughter, the motive is simple. There are five kinds of offenses and blasphemies uttered against the Immaculate Heart of Mary: Blasphemies against the Immaculate Conception; blasphemies against her perpetual virginity; blasphemies against her Divine Maternity, in refusing at the same time to recognize her as the Mother of men; blasphemies of those who openly seek to foster in the hearts of children indifference or scorn, or even hatred for this Immaculate Mother; the offenses of those who directly outrage her in her holy images. Here, then, My daughter, is the reason why the Immaculate Heart of Mary causes Me to ask for this little act of reparation and by means of it, moves My mercy to forgive those souls who have had the misfortune of offending her. As for you, try without ceasing, with all your prayers and sacrifices, to move Me to mercy toward those poor souls.”

Litany to the Immaculate Heart of Mary 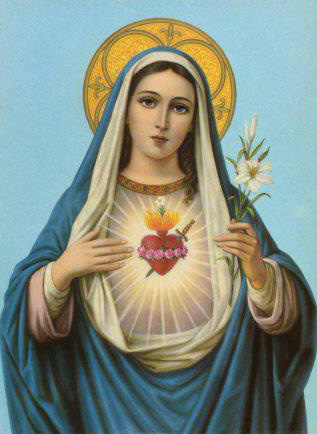