Feast of Our Lady of the Gate of Dawn

Early in the fifteenth century, the new city walls of Vilnius were built. Above each of the gates the people of the town placed an image of the Blessed Virgin. About a century later, Carmelites took over one of the parish churches in the vicinity of the southeastern gate of the town. This gate is called the Gate of Dawn.

The Carmelites took special care of the image that was placed above the gate near their church. When the army of Moscow set fire to the city of Vilnius in 1655, most of the town was destroyed in a fire that lasted 17 days. However, the image above the Gate of Dawn survived without any damage. This strongly encouraged the people’s devotion toward it and attracted many pilgrims from outside.

Early in the eighteenth century there was yet another fire in Vilnius. When the image survived once again, the Carmelite fathers built a special shrine for it in a chapel above the gate in 1706. Since that year, people have come to this chapel daily to recite the litany of Loreto before the image.

In 1773 Pope Clement XIV granted an indulgence for the faithful at the Gate of Dawn.

By the Pope’s decree of 1927, the painting of the Madonna in the Gate of Dawn chapel was given the name of the Icon of the Mother of Mercy and was crowned with papal crowns.

There are great shrines in the world consecrated to Mater Misericordiae (Mother of Mercy), among which one should mention the most famous Catholic Marian shrine in Eastern Europe with the image of "the Mother of Mercy" on the Gate of Dawn in Vilnius.

Our Lady of the Gate of Dawn in the writings of St. Maximilian

Blessed and dear Vilnius, lucky are all those who shall pass under this blessed gate, in which can be found an image of the one who is able to reciprocate even the slightest manifestation of love! How many souls will owe their conversion and salvation only to having gone through that Gate and having taken off their cap, maybe unwillingly…

Vilnius. I stepped down onto the platform in the company of a soldier that I had met during the trip, and left the station quickly and started walking down the street. After a few minutes' walk we reached the area of the Gate of Dawn. It was the first time in my life that I had seen it. Yet I could not see the miraculous gate. My travel companion took off his cap, and I after him. A carriage with officers passed along: all of them took off their caps, as though ordered to do so. We passed the wall gate. I would have liked to put my hat back on, but I noticed that my guide showed no sign of covering his head.

I turned my eyes to passers-by: everyone was holding their caps in their hands. I turned around to see the miraculous picture, which aroused such respect. Yet I could not see it, because it was already shrouded in the darkness of the night and covered with a veil, but this time I noticed something unusual.

A middle-aged man was walking behind me. His face was typically Jewish: he was bareheaded and held his cap in his hand. We walked along like that for quite a while. To my expressions of wonder, my companion replied that here they all pay homage to the Most Blessed Virgin, without regard to differences of religion. 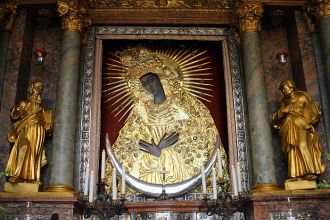 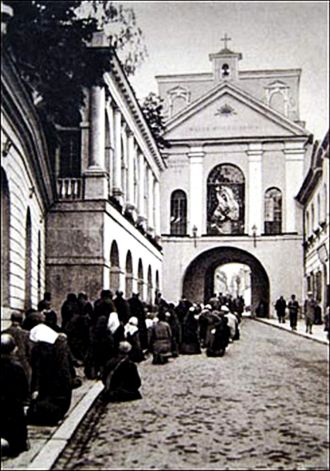 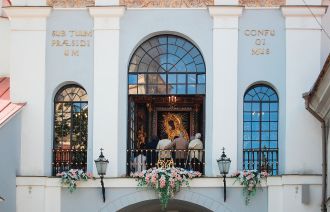