On the last Saturday and Sunday of November, at St. Michael's Church in Rheinhausen (Germany), Father Karl Stehlin led the days of recollection. Their main theme was: "Saint Maximilian Kolbe - defender of Catholic Tradition".

The speaker gave several conferences, which focused on the following issues:

1) Saint Maximilian opposed ecumenism. He founded the M.I., whose aim is the conversion of the infidels to the Church by Mary, Mediatrix of Graces.

2) The founder of the M.I. was against pacifism. The Knights are active in the militant Church: fighting against sin and Satan, fighting for the triumph of Christ and Mary.

3) The ideas of the M.I. and its actions were targeted by the fiendish freemasonry movement as these were against the spirit of the Second Vatican Council; instead of "introducing paradise on earth”, St. Maximilian put at the centre the salvation of every soul and preserving it from the clutches of sin, attachment and imperfection.

The days of recollection were crowned with a ceremony to welcome new Knights. The ranks of the army of the Immaculate Mother of God were joined by 15 zealous people, including several children.

Mothers of families in Rheinhausen, with the permission of the prior, established M.I. 2 "Mothers". Members of the circle meet twice a month. At the first meeting there is a conference by one of the ladies, and the second meeting of the month is for common prayer for the holiness of families. 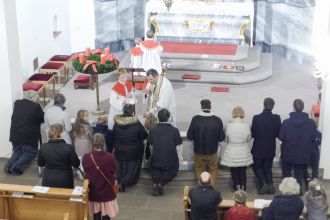