Baptism of Our Lord

The thoughts of the Church today are fixed on the Baptism of Our Lord in the Jordan, which is the second of the three Mysteries of the Epiphany. The Emmanuel manifested Himself to the Magi, after having shown Himself to the Shepherds; but this manifestation was made within the narrow space of a stable at Bethlehem, and the world knew nothing of it. In the Mystery of the Jordan, Christ manifested Himself with greater publicity. His coming is proclaimed by the Precursor St. John; the crowd that is flocking to the river for baptism is the witness of what happens; Jesus makes this the beginning of His public life. But who could worthily explain the glorious circumstances of this second Epiphany?

It resembles the first in this, that it is for the benefit and salvation of the human race. The star has led the Magi to Christ; they had long waited for His coming, they had hoped for it; now they believe. Faith in the Messias having come into the world is beginning to take root among the Gentiles. But Faith is not sufficient for salvation; the stain of sin must be washed away by water. He that believeth and is baptized shall be saved (Mark 16:16). The time is come, then, for a new manifestation of the Son of God, whereby there shall be inaugurated the great remedy, which is to give to Faith the power of producing life eternal.

Now the decrees of Divine Wisdom had chosen water as the instrument of this sublime regeneration of the human race. But in order that water should have the power to purify man from his sins, it was necessary that it should be brought into contact with the Sacred Body of the Incarnate God. The Eternal Father had sent His Son into the world, not only that He might be its Lawgiver, Redeemer, and the Victim of its salvation, but that He might also be the Sanctifier of Water; and it was in this sacred element that He would divinely bear testimony to His being His Son, and manifest Him to the world a second time.

Jesus, therefore, being now thirty years of age, comes to the Jordan, a river already celebrated for the prophetic miracles which had been wrought in its waters. The Jewish people, roused by the preaching of John the Baptist, were flocking thither in order to receive a baptism which could indeed excite a sorrow for sin, but could not effect its forgiveness. Our Divine King approaches the river, not, of course, to receive sanctification, for He Himself is the Author of all Justice — but to impart to Water the power of bringing forth, as the Church expresses the mystery, a new and heavenly progeny. The saintly Baptist places his trembling hand upon the Sacred Head of the Redeemer, and bends it beneath the water; the Sun of Justice vivifies this His creature; He imparts to it the glow of life-giving fruitfulness; and Water thus becomes the prolific source of supernatural life.

But in this commencement of a new creation, we look for the intervention of the Three Persons of the Blessed Trinity. All Three are here. The heavens open; the Dove descends, not as a mere symbol, prophetic of some future grace, but as the sign of the actual presence of the Holy Ghost, the Spirit of life, Who gives peace to men and changes their hearts. The Dove hovers above the head of Jesus, overshadowing at one and the same time the Humanity of the Incarnate Word and the water which bathed His sacred Body.

Thus was the holiness of Emmanuel manifested by the presence of the Dove and by the voice of the Father, as His kingly character had been previously manifested by the mute testimony of the star. The mystery is accomplished, the Waters are invested with a spiritual purifying power, and Jesus comes from the Jordan and ascends the bank, raising up with Himself the world, regenerated and sanctified, with all its crimes and defilements drowned in the stream. Such is the interpretation and language of the Holy Fathers of the Church regarding this great event of Our Lord’s life.

Let us honor Our Lord in this second manifestation of His Divinity, and thank Him, with the Church, for having given us both the Star of Faith which enlightens us, and the Water of Baptism which cleanses us from our iniquities. Let us lovingly appreciate the humility of our Jesus, Who permits Himself to be weighed down by the hand of a mortal man, in order, as He says Himself, that He might fulfill all justice (Matt. 3:15); for having taken on Himself the likeness of sin, it was requisite that He should bear its humiliation, that so He might raise us from our debasement. Let us thank Him for this grace of Baptism, which has opened to us the gates of the Church both of Heaven and earth; and let us renew the vows we made at the holy Fount, for they were the terms on which we were regenerated to our new life in God. 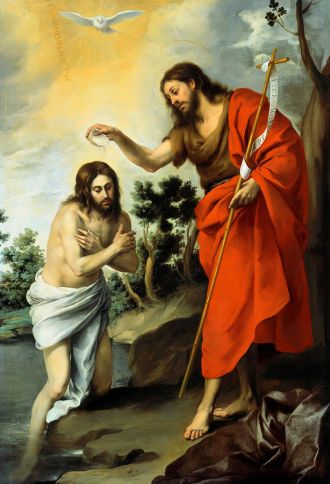