The Conversion of St. Paul

Paul before his conversion named Saul. Our Lord appeared to him and Saul was converted. Saul was from Tarsus. Saul, then in the twelfth year of his age, came to Jerusalem, the Holy City. Saul entered Gamaliel school and was a frequent visitor at his home.

One day when some of the most fiery of the Jews had laid hands on Stephen and led him to the Sanhedrin, Saul was in their midst.

Stephen was young like Saul. He, too, was of Jewish blood though Greek by birth. He, too, looked to the future with inspired and steady eyes; and he thought of a peace that was to be carefully guarded but not won by the sword. He was, as they said, a Deacon; that is, he was appointed to serve his companions in the faith. He gave them both bread and the words of life; faith and works belong together.

The young Stephen had acquired a certain popularity that the Sanhedrin feared. They thought it an opportune time to get rid of him, and for this cause witnesses were easily found. These accused him of saying that Jesus the Nazarene, Whom he followed, would destroy the Temple and change all the rites of Moses. This was the worst of crimes and the greatest shame a Jew could commit against Jews.

Young Saul, the most uncompromising exponent and belligerent champion for the very letter of the Law, carried away with zeal, leapt into the midst of the shouting band. When they arrived outside the city, he took his stand on a heap of rocks, inciting the others as self-appointed leader. That mixed crowd of Scribes, Sadducees, and beggars, was an exciting spectacle. The witnesses responsible for the false testimony and consequently for the murder, turned to Saul and entrusted their cloaks to his keeping, sure that they would be safe.

Saul saw Stephen sink to the ground with a look of peace on his face, in sharp contrast to the fury of his murderers; and he heard him call on Jesus. Always that Jesus, Who had caused the destruction of Jewish traditions and ceremonies. That name rang in Saul's ears louder than the shouts of those who did the stoning.

Saul had not taken part in the stoning but he had consented to the deed by keeping guard over the garments of those who did. He shared in it, not only through personal responsibility but also through a corporate one, since he was the most eloquent promoter of the war waged against the new sect. Now that the persecution had begun with the stoning of Stephen, Saul put himself at the head of the persecutors. He always followed an idea without swerving. Either he would exterminate those deserters from the faith of the Fathers or else they must renounce the new religion. His choice made, he went straight forward.

Saul's fanatic ardor increased with every persecution, so much so that soon he imagined he had freed his country from this pest. He had passed through the land like a fiery column, erect and thundering. He had purified the house of his forefathers. His faith had been turned into action; and his life was wholly sworn to the service of his Jewish religion. Henceforward those who rejected the Law were no longer seen about the Temple. The land of Judea was restored to the integrity of the Mosaic tradition.

The Conversion of Saint Paul

Saul, with all the air of a conqueror, started for Damascus with quick, bold intent. He was accompanied by an armed escort and provided with money. He passed through Palestine and on all sides he saw the results of his purifying activity. The Ancients and the people applauded and sent their blessings after him.

Now as he travelled on horseback to Damascus. Of a sudden, from east to west, as if the ball of the sun had burst asunder, with a rumbling sound a wall of dazzling white light stretched before him. It was such a sudden and powerful flare that Saul's eyes, accustomed as they were to the glare of Syria, could not endure it, and he fell from his horse. His companions quickly dismounted to lift him up, but they drew back when Saul rose to his knees and was heard speaking to an invisible being. When he fell, he heard a voice in that flash of light saying, "Saul, Saul, why persecutest thou Me?"

Saul, crushed and helpless, raised his eyes and saw a person in the center of that radiant brightness, but the brilliant white light burned the pupils of his eyes, and filled them with red shadows, like a flood of blood. Trembling, he asked, "Who art thou, Lord?" In the evidence of the blinding miracle, he could not doubt but that this was a Divine Being. And the Being answered, "I am that Jesus Whom thou persecutest."

The reply was a new outburst of light for the youth kneeling in the dust of the road, plunged into the darkness that succeeded such great brilliance and glory. He had known of Jesus, but believed Him to be an enemy of God. Now Jesus presented Himself to Saul with unmistakable signs of Divinity. Saul understood, in a confused way, that in every follower of His, in each and all of those men and women Saul had put in chains, he had chained and persecuted Jesus. This first idea, like a new light, was an arrow piercing his mind. Bent in the dust under this overwhelming revelation, he heard again that voice strong but gentle, speaking to him, "It is hard for thee to kick against the goad." Truly, it was hard.

Everything about him seemed to be crumbling; his boldness as well as his strength were shattered. Lying in the dust, all his Pharisaical self-assurance rebelled and struggled, until his love for the Most High God overcame his pride, and surrendering, he moaned: "Lord, what wilt Thou have me do?" In his usual decisive way, and ruled by God's power, he at once put himself at the service of Jesus, and called Him Lord. And the Lord commanded, "Arise, enter the city, and there it will be told thee what thou must do."

His fright had been great, but his surprise was even greater. All that he had ever lived for, everything in his life was now turned topsy-turvy; his pride as a learned Pharisee, one who pretended to discriminate between truth and falsehood, to distinguish between the just and the wicked, the pure and the impure, all was now dispersed like a breath of air. All his plans for Judaism had collapsed around him and had only made his darkness more intense. On the contrary, those ragged Nazarenes whom he had judged to be traitors to his nation, were on the side of truth and justice. They were identified (and this thought pierced him) with the Lord Jesus.

Jesus of Nazareth! He had, until now, thought Him an impostor, Who had died a few years previously, put to death by the express order of the religious and civil authorities. And now that condemned One was God, the Son of God. All Saul's past education, his passions and youthful ideals, reacted against this revelation. His flesh and all his ambitions fought and clashed throughout his whole being until he was exhausted. Everything seemed to say to Saul that it must be an illusion.

On the third day, at the moment when his blindness seemed most to crush his spirit, he turned to the Lord in deep humility. At that moment he saw faintly the figure of a man whom he did not know coming towards him, who touched his eyes as if to take away the veil that blotted out his sight. Saul waited motionless and breathless, not understanding the meaning of this vision. After a while someone came to tell him that a certain Ananias wished to see him. Saul did not know the man, and no doubt wished he had not come to disturb him, but the stranger had already entered. Coming near he laid his hands on Saul's head with great tenderness, and then on his eyes, calling him, "brother."

"Brother Saul, the Lord Who has appeared to you on the way, has sent me, in order that you might see, and be filled with the Holy Ghost."

Saul, who had raised himself and had turned his face towards the voice, felt something like scales falling from his eyes. Now he could see!! And the first thing he saw was that brotherly face. Then he asked eagerly, "Do you know Jesus? Then I am pardoned? Then the Lord has not abandoned me?"

"Far from it!" answered Ananias. "The Lord told me in a vision to seek you; and when I remarked that you were a persecutor, He revealed to me that He had chosen you for an Apostle among the Gentiles and the children of Israel. He is calling you to bear much suffering for His name's sake. You are for the Lord, a vessel of election."

Although Saul had lived for three days in the very midst of Divine activity, at this news of his vocation he was still more amazed. He had been a persecutor, now God was calling him to suffer persecution for a great cause. God had chosen him from among his people to announce the truth to Israel and to others even to all people. For such a cause he would have to suffer much. The reward of his Apostolate would be suffering; but this did not frighten Saul.

He knew that whosoever gives himself to God must brave the anger of those who are against God. His character was too well molded on that of the Prophets, too well formed by the traditions of his people, to be concerned with suffering. He was ready for all things, knowing that if God were with him, he, a poor Hebrew, would be able to do all things for God.

The fiery youth had now become a most docile pupil. He got up at the request of Ananias and was Baptized, receiving the Holy Ghost. From that moment he belonged entirely to the Son of God Who had died and had risen again, to the Son of God Who had appeared to him in His power and His splendor. The miracle had been a great one, but only because a persecutor like Saul needed such a miracle to transform him into a "Servant of Jesus Christ."

"I had come to persecute Him and to blaspheme Him; but now I have seen His power. He is the Lord, the Son of God. Be Baptized, if you wish to be saved. Jesus is the Christ." 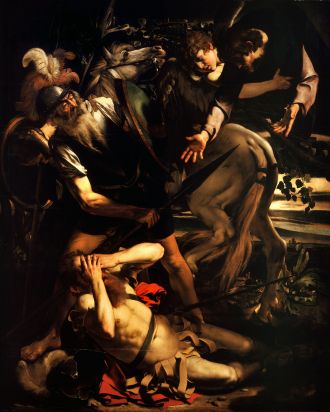