6. Proof ex contrario: The Second Vatican Council and the Dispositions of the Popes Regarding the Secret.

The attempt of the Vatican to eliminate the true secret and to definitely suppress it is, in itself, a revelation of its contents.

The general attitude of the Vatican is to absorb Fatima, to adapt it by omitting some of its aspects and over-emphasising others, by making use of Fr. Dhanis’s Fatima I and II theory, and finally by assimilating it into the modernist concept of religion. This transformation and alienation of Fatima has been cleverly made, with two exceptions: the consecration of Russia was a difficult piece to assimilate by making the people believe that it’s done. The Vatican document of the year 2000 employs strong arguments for this, even making use of fake letters claiming to come from Sr. Lucia as arguments of authority.

But one element in Fatima must have been totally incapable of being twisted and re-shaped into a modernist framework, and that is the Third Secret. Let us consider some important events in the sad history of the suppression of the Third Secret.

—The silencing of Sr. Lucia: In 1959, after the interview with Fr. Fuentes, Sr. Lucia received the order from Rome not to make any more commentaries on the Secret. In 1960, Sr. Lucia wrote that she can’t receive any more visits, except from her own family. Even bishops and archbishops were forbidden to see her. Whenever she was asked about the apparitions after 1973, Sr. Lucia always declared that she did not have the right to speak about the apparitions to anyone without the permission of the prefect of the Sacred Congregation of the Faith, or the Holy Father himself. According to the customs of the Carmel, Sr. Lucia was never alone, even when she received visits from her family members.

From the supposed disclosure of the Third Secret on the 26th of June 2000 until her death, this rigorous silence was maintained. She could never speak to anyone other than close members of her family. Why such silence on her part? After all the disputes about whether or not the vision of the bishop dressed in white was the actual secret, or the totality of the secret, would not the easiest thing have been to let her speak and confirm personally that the published text really is the Third Secret?

— The silencing of the most serious specialists of Fatima (Fr. Alonso, Fr. Fuentes): Those who treat Fatima ‘normally’, that is, according to its official modernist interpretation, are not excluded; their books are printed officially. Only, and only when priests like Fr. Alonso, Michel de la Trinité, Fr. Fuentes, etc. reveal the true message of Fatima and the likely contents of the Third Secret does Rome begin to be very aggressive and lose its temper!

— The employment of blunt lies and statements contrary to historical proofs against the 1960 date for the revelation of the Secret: If they think that Lucia is a complete victim of her illusions and ‘visions’, all that she said about Fatima is to be “handled with care and can’t be taken à la lettre”, including this date. Then why pick out this one statement of Sr. Lucia and cover it with lies?

— Keeping it wrapped in total secrecy for 40 years must have been motivated by a very special reason, because this strategy is in itself very bad, as it leaves room for: curiosity (when you want to be finished with the matter), contradiction (everything is allowed, all private revelations even without approval from Rome, except the Secret), danger of it becoming known somehow by an indiscretion (the more persons know it, the more they give little hints; Sr. Lucia directly and indirectly can talk about it in spite of the imposed silence), accusations of ambiguity, dishonesty (you say, it’s not relevant; so why do you hide it?).

To overcome all these negative arguments and yet NOT to reveal it indicates that it must contain something exceptional concerning the ones suppressing it, something which they could not endorse.

— An even more special motive must have been behind the sudden idea of releasing a fake secret in 2000, as the disadvantages of such a procedure are more severe than keeping silent about the Secret: more contradictions (why not release such a ‘secret’ during 40 years if it is so obscure and uncontroversial? Why forbid Lucia to talk about it? Contradiction with all that Sr. Lucia said, contradiction with all witnesses of the Third Secret before), false statements, production of other fakes; impossibility of integrating this strange text into the whole message of Fatima, danger of the revelation of facts which prove that this is a fake etc.

It must have been considered as the providential opportunity to be finished once and for all with that unpleasant ‘story’ of Fatima, which “now belongs to the past”. In fact, the entry into the new millennium offered a unique opportunity to close the history of Fatima and to bury definitively this fatal secret which, according to Father Dhanis' theory, almost unanimously shared in the Vatican, is only an invention of Lucia. spacing

Indeed, its revelation in this year 2000 made it possible to insinuate that it concerned only the 20th century. The Vatican authorities seem to mean: “everything has been revealed, the consecration has been made and Russia is converted. All this is of the past, let us now approach the 21st century. If there is a point to remember in this whole story, it is a call to prayer and penance.”

Conclusion: What in the world can provoke such an almost endless series of ambiguous, manipulative, and lying activities? The true Secret must pierce the Modernists to their hearts. It cannot be endorsed, and so must either be silenced or exchanged. Now what is it that cannot be endorsed by them? What is it that cannot, by any means, be assimilated, adapted, interpreted or even (as in the question of the consecration of Russia) manipulated? What sort of writing on 22 lines must make them determined not to reveal it by any means?

The answer must certainly be that the Secret contains a clear accusation against the whole new orientation as being wrong and utterly disastrous!

The Third Secret must surely indicate how those, which the Modernists consider as their greatest achievements, are in fact the worst calamities having the most horrible consequences.

If the Third Secret concerns the Pope in some way, it must issue a warning which not only does not please him, but makes him determined to hide it. It must be a horrible prophecy for him (and something much worse than the physical death which the official version depicts), but something so humiliating that it leads John XXIII to say: “It doesn’t concern my pontificate.” 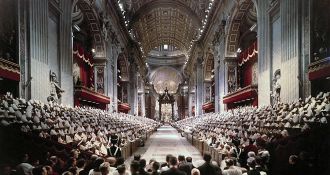 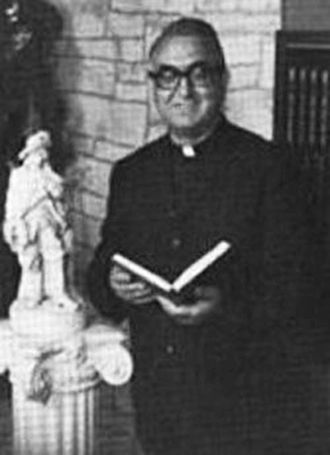