The discovery of hidden Christians in Japan

Today we celebrate Feast the Discovery of Christians in Nagasaki (Japan). Many people without priests or religious instruction had persisted in their Christian faith. Pope Pius IX called it a miracle.

In 1858, Commodore Perry’s gunboats forced a commercial treaty on Japan with the United States. The Treaty of Amity and Commerce between France and Japan was concluded and French people came to live in Nagasaki. They desired to have a church for Sunday worship so that O'ura Cathedral was built in 1865. It was called “French Temple” because it was built for French people.

A month after the completion of O'ura Cathedral, the historical moment had come. Fifteen hidden Christians including Yuri Sugimoto came to O'ura Cathedral. On March 17, 1865 in Nagasaki, Father Bernard Petitjean, a priest of the French Societe des Missions Etrangeres, hears a noise at the back door of church. On opening he is surprised to find a group of 15 middle-aged Japanese men and women — surprised because all native — born subjects of the Mikado are strictly forbidden to associate with Christians and his chapel has been declared to be reserved only for foreigners.

Until now, Fr. Petitjean has had no visitors. But standing before him are these 15 people. A young man speaks up. His name is Peter. He says timidly, and wonders whether Fr. Petitjean owes allegiance to ‘the great chief of the Kingdom of Rome.’ The missionary answers that the Vicar of Christ, Pope Pius IX, will be very happy to learn of their interest. Peter, however, wants to make sure he has been understood. He asks, "Have you no children?" "You and all your brethren", answers the missionary, "Christian and others, are the children whom God has given me. Other children I cannot have. The priest must, like the first apostles of Japan, remain all his life unmarried". At this, Peter and his friends bend their heads down to the ground and cry out: "He is celibate! Thank God". They approached to Father Petitjean who were praying in the cathedral and whispered “We have the same feeling in our hearts as you do.” Then they mention their village Urakami, north of Nagasaki: "At home, everybody is the same as we are. They have the same hearts as we". That made him realized that they were Christians. In spite of the situation, severe banning on Christianity and having no missionaries around, continued for two hundred and fifty years, it is revealed to foreigners that the belief for Christianity had still existed. Father Petitjean was very surprised and pleased. And then he led them in front of the statue of Virgin Mary. This event came to be known as the “discovery of Christians”. This “Statue of the Virgin Mary of the discovery of hidden Christians” is still kept in O’ura Cathedral.

The story of this incident spread to hidden Christians in Goto and Sotome by word of mouth as it spread to Christians all around the world. They pretended to “go and observe French Temple”. But the fact is that some prayed others got baptized in O’ura Cathedral.

Father Petitjean was among the first wave of foreigners to arrive after the forced entry effected by U.S. Commodore Matthew Perry in 1854. For two centuries before, in hamlets and remote islands off western Kyushu, little communities of Kakure Kirishitan (Hidden Christians), some 30,000 individuals altogether, without priests or religious instruction had persisted in their Christian faith. Pope Pius IX called it a miracle.

Peter and his friends were the first evidence of an astonishing historical fact. More than 200 years earlier, Japan’s thriving Christianity had been outlawed, its adherents tortured and slaughtered by the tens of thousands. February 5, 1597 is the day of Japan’s first martyrs, now celebrated in the Church as a memorial on February 6 (article about it is here). Christianity continued to spread in Japan, especially after the Emperor died. However, in 1614 a new persecution began and Christians in great numbers chose death rather than renouncing the faith. Within a year all churches and missionary centers were destroyed. With government agents, soldiers and spies everywhere, priests and catechists were executed, and new priests arriving from Europe were easily identified by their foreign accents and executed. With the introduction of new and refined tortures to break the Christians, Nagasaki Christians migrated to offshore islands and inland, up the nearby Urakami Valley. They devised ways of handing on the faith without priests: they became farmers and fishermen and formed an underground church.

Article about Twenty-six Martyrs of Nagasaki in section: Saints of Virgin Mary / Biographies of Saints 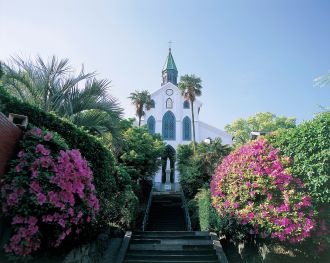 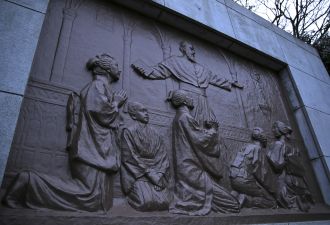 A monument commemorating the discovery of hidden Christians in Japan 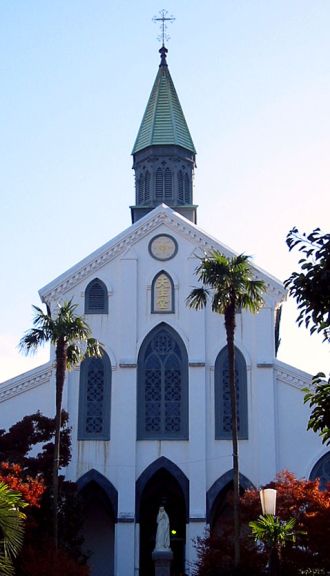