Today is Feast of the Seven Sorrows of the Blessed Virgin Mary. The Church twice commemorates the sorrows of its heavenly Mother. The Friday of Passion week, since the 15th century, has also been dedicated by the universal Church to her Compassion. Why is this so? To understand this double liturgy, we must know that Mary is also the Mother of the Mystical Body.

In 1668 the feast in honour of the Seven Dolorous was set for the Sunday after September 14, the Feast of the Holy Cross. The present feast was instituted by Pius VII after his return from his captivity and exile, which lasted from 1809 to 1814. The feast was inserted into the Roman calendar in 1814, and Pope Pius X fixed the permanent date of September 15 for the Feast of the Seven Sorrows of the Blessed Virgin Mary.

“O all ye that pass by the way, attend and see if there be any sorrow like to my sorrow.” Abbot Gueranger says in the Liturgical year “The Saviour to come is not only the reason of Mary’s existance, He is also her exemplar in all things. It is as his Mother that the Blessed Virgin came, and therefore as the ‘Mother of Sorrows’; for the God whose future birth was the very cause of her own birth, is to be in this world ‘a Man of sorrows and acquainted with infirmity.’” Christ is the reason for Mary’s birth and existence. Jesus and Mary suffered together for the whole world. Mary suffered so much from watching her Son suffer. All throughout Our Lord’s life swords were piercing the heart of His Mother, starting with the prophesy of Simeon all the way to His death and burial. A total of Seven swords were to pierce her motherly heart. Saint Bernard says: “the sword would not have reached Jesus if it had not pierced Mary’s heart.” Mary’s sorrow is unlike any sorrow that anyone could ever know. And she suffered it all with her Son for souls, for us, that we may see the truth and be able to live happily with her and her Son forever in Heaven.

Christ no longer suffers, and for Our Lady also, all suffering as we understand it has ceased. Nonetheless, the prophet Jeremias in his Lamentations, asks: To whom shall You be compared, O Virgin? Your affliction is like the ocean. A mother who is happy in her home weeps just the same over the sorrows of her children. The statues and pictures of Mary all over Europe wept before the Revolution in France, and Her statues weep again today, in many places. The Passion of Christ continues in His elect, in particular in His Vicar on earth, from whom He does not separate Himself, and against whom the force of hell is deployed unceasingly. The mysterious compassion of the Mother is forever acquired for the Mystical Body of her Son, which must reproduce the divine death in its human nature, elevated above its natural condition by the superhuman power of grace.

Mary's great sorrows began at the prediction of Simeon that a sword would transpierce her heart. Soon afterwards, she was obliged to flee with the newborn Infant, already object of a fatal search. She lost Him in the temple for three inexpressibly painful days; she met Him on the road to Calvary, and the sight indeed pierced Her heart. She saw Him die, heard His final cry, and witnessed the opening of His side with the effusion of His last drops of blood, mingled with water; She received in her arms the inert body of the most beautiful of the sons of men. Finally, she was obliged to depose Him in a tomb, leave Him there and return with Her adopted son, John, to a deicidal Jerusalem.

The Queen of Martyrs has never ceased to encourage Her children on earth to bear their own crosses, which complement the Passion of Christ. He suffered first the ordinary contradictions of life; for three years He was taunted and regarded as a menace by those who should have recognized Him and His mission. He knew hunger, cold and fatigue; He slept so heavily in a boat amid a tempest, that we can only suppose He was exhausted. He knew what it was to be abandoned in need and to lose, to the empire of various passions, followers He had called His. Christ is our forerunner in all human sorrows and difficulties. Mary, as His Mother, offered to God with Him all the afflictions of His earthly life, and she continues to offer those of the Church, for its sanctification, for the souls in Purgatory and the salvation of souls.

1. When the time came for their purification according to the law of Moses, they brought him up to Jerusalem to present him to the Lord.

3. He took Jesus up in his arms and blessed God and said, "Lord, now let thy servant depart in peace, according to thy word.

5. And his father and his mother marveled at what was said about him.

6. and Simeon blessed them and said to Mary his mother, "Behold, this child is set for the fall and rising of many in Israel, and for a sign that is spoken against".

II. The Flight into Egypt

1. When the Magi had departed, behold, an angel of the Lord appeared to Joseph in a dream.

III. The Loss of the Child Jesus in the Temple

1. Now his parents went to Jerusalem every year at the feast of the Passover. And when he was twelve years old, they went up according to custom.

IV. The Meeting of Jesus and Mary on the Way of the Cross

1. And they brought him to the place called Golgotha (which means the place of a skull).

2. So the soldiers came and broke the legs of the first, and of the other who had been crucified with him.

"I have obtained this grace from my divine Son, that those who propagate this devotion to my tears and dolorous will be taken directly from this earthly life to eternal happiness, since all their sins will be forgiven and my Son will be their eternal consolation and joy." 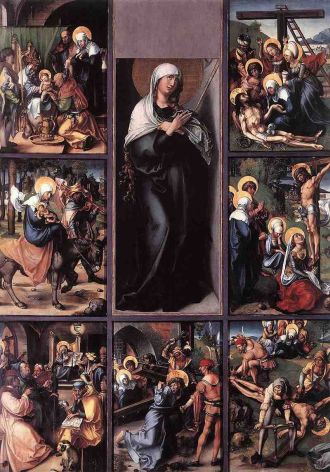