The Visitation of the Blessed Virgin Mary

The Archangel Gabriel, while announcing to the Blessed Virgin Mary the mystery of the Incarnation, informed her also of the fact that her cousin Elizabeth, who, advanced in years, had long been barren, was about to be blessed with a son. Mary rejoiced greatly at this news, and having given thanks to the Almighty for the priceless grace of the Incarnation of the Eternal Word, she hastened to visit her cousin.

St. Chrysostom says: "The Son of God, who came into the world to save mankind, desired, immediately on His entering the world, to prove His love for man, and fulfil the divine office of Redeemer. Hence He moved the heart of His holy mother, in whose virginal womb He was concealed, to visit her cousin Elizabeth, in order that by His presence He might cleanse His fore-runner, John, whom his mother still carried in her bosom, from original sin. He could have done this while absent, but He intended to give us a glorious example of humility, in visiting one who was so infinitely below Him.

The Blessed Virgin, although raised to the highest dignity as the mother of the Lord, hesitated not to visit and assist her cousin, who was so much below Her. She left us a splendid example of humility and kindness, showing us that we must not only love our neighbors, but also assist and visit them, and, according to circumstances, serve them, regardless of their being much lower than we.

Mary went from Nazareth to the city of Hebron, which belongs to the tribe of Juda. According to some authors, this city is 38 or 40 miles from Nazareth, and could be reached only by travelling over a hilly country; hence this journey was very fatiguing for so delicate a maiden as Mary.

The Gospel says: "She went into the hill country with haste." Why with haste? Not only to show her joy and willingness, but also as St. Ambrose says, "because Mary was filled with the Holy Ghost, who is never satisfied with hesitating and tarrying." The love within her, the grace of the Holy Ghost, persuaded Mary to hasten. Mary went hastily over the mountains that she might the sooner return to her beloved solitude. She did not wish to be for a long time out of her house. This additional reason is given by the above cited St. Ambrose, who adds: "Learn from it, maidens, not to wander about in strange houses, nor to remain in the streets, nor to hold long conversations in public places."

Having arrived at Hebron and entered her cousin's house, she joyfully greeted Elizabeth, and at the same moment a twofold miracle happened. John, still in his mother's womb, leaped with joy, and Elizabeth was filled with the Holy Ghost. This leaping is regarded by the Holy Fathers as a more than natural movement of the child, and at the same time as a sign that John, endowed, by especial grace of God, with the light of reason, recognized by revelation, in the virginal womb of Mary, the presence of his Saviour, and, full of joy, worshipped Him.

Elizabeth was also filled with the Holy Ghost when she heard Mary's greeting, and recognized by divine revelation that Mary would become the mother of the Incarnate Word. Hence she cried: "Blessed art thou among women and blessed is the fruit of thy womb." With these words Elizabeth proclaimed that Mary was raised by God above all other women, and was more than all others blessed, because she had become the mother of Him who is the source of all graces and blessings. On account of the blessed, and more than blessed fruit of her womb, namely, on account of the only-begotten Son of God, whom she was carrying in her virginal womb, is she blessed, blessed far above all human kind.

This is what we know from Holy Writ of the history of today's festival; and it is only to be added that the visitation of Mary conferred great blessings to the house of Elizabeth. St. Ambrose entertains no doubt that the purity and innocence of St. John's life was the result of the grace which Mary's presence poured into his soul. We must also consider how willing Mary is to come to our assistance. No sooner had she become Mother of the Lord, than she desired to show that she had become also the loving mother of mankind. She was not called, she was not entreated to come, but went to Elizabeth, prompted by her own kindness. She proved herself gracious to the sinner as well as to the just. Through her Son she purified St. John, stained with original sin, and bestowed on the pious Elizabeth many precious graces. What confidence towards the Blessed Virgin should this awaken in us, whether we be counted among the sinners or the just!

Finally, let us consider in what manner the Lord, having become man, bestowed His grace. He desired to purify His forerunner from original sin, and sanctify him even before his birth. This first spiritual gift He imparted through Mary; for, no sooner had she greeted her cousin, than John leaped for joy and was then cleansed from original sin. When, many years afterwards, at Cana in Galilee, He bestowed His first grace on man in temporal need, Mary was the mediator. The sanctification of John was the first miracle He wrought before His birth; the changing of water into wine, the first that He publicly wrought when He walked upon earth. Both were done through the intercession of Mary. The object of this was to teach us, as St. Bernard says, "that it is the will of God that we shall receive everything through Mary," that is, through her intercession. Who, therefore, would hesitate to fly to her confidently for refuge in all temporal and spiritual troubles?

Consider the kindness of the divine Mother, not only towards Elizabeth, but also towards the unborn John, and renew your confidence in her compassion and mercy. Further, renew your devotion to her, and let her, the loving and mighty Mother, be your guide in all your spiritual and temporal cares. If you are a sinner, she will obtain for you pardon for your iniquities, through true repentance; but if you belong to the righteous, she is ready to ask of God new grace for you, that you may continue on the path leading to life everlasting. "She opens for every one the bosom of mercy," writes St. Bernard, " that all may receive of her plenty; the prisoner, liberty; the sick, health; the sorrowful, comfort; the sinner, pardon; the righteous, grace." You need only take refuge with her, and invoke her with filial confidence. Today's festival tells you that she, with loving kindness, visited and filled with graces her who had not even invited or asked her to come. What then will She not do for you, if you request and call to her? She has shown herself so kind when she was still upon earth, what will she not do now, being glorified in heaven?" Great was the mercy of Mary when she was still living upon earth," writes St. Bonaventure, "much greater is it now that she reigns in Heaven. She bestows now on mankind countless benefits and greater mercies, because she now recognizes our misery much better." Hence, make the resolution, always to give her due honor, and to invoke her with filial confidence in every distress. "Call on Mary, in every event of your life," says St. Basil, "for, God has ordained that she shall come to our assistance in all our cares and sorrows." 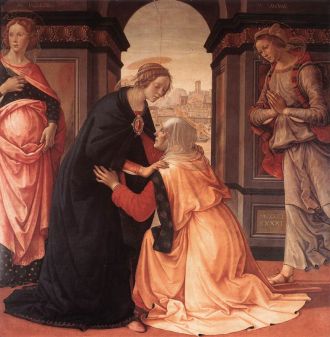 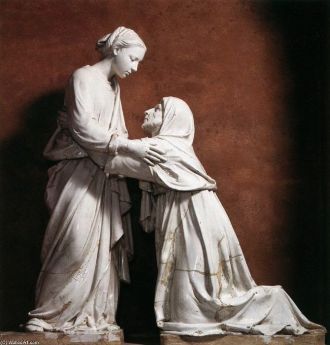