Saint Margaret Mary, a soul of divine predilection, was born at Terreau in Burgundy, on July 22, 1647. During her infancy she showed a wonderfully sensitive revulsion to the very idea of sin, and while still a young child always recited the entire Rosary every day. She lost her father at the age of eight years, and her mother placed her with the Poor Clares. She was often sick and for four years was bedridden, losing almost entirely the use of her members. She made a vow to Our Lady to become one of Her daughters if She cured her, and was suddenly entirely well.

She was of a gay temperament and her heart became easily attached to human affections. God began her purification when the charge of her mother's house was confided to persons who reduced the family to a sort of servitude. Margaret Mary turned to God for strength and consolation when she was accused of various crimes she had not committed. In short, the Saint of the Sacred Heart learned to suffer for Christ, with patience, what innocence can suffer in such situations.

She desired to be a religious, but her mother could not bear to hear a word of that desire. Finally God came to her assistance through a Franciscan priest, who told her brother that he would answer to God for the vocation of his sister. In 1671 she entered the Order of the Visitation of Mary, at Paray-le-Monial, and was professed the following year. She followed all the practices of the monastery in perfect obedience, spending as much time as she could in the chapel with her Lord. After sanctifying her by many trials, Jesus appeared to her in numerous visions, displaying to her His Sacred Heart, sometimes burning as a furnace, and sometimes torn and bleeding on account of the coldness and sins of men. Behold this Heart which has so loved men, and been so little loved by them in return!

In 1675, she was told by Our Lord that she, with the aid of Father Claude de la Colombiere of the Society of Jesus, was to be His instrument for instituting the feast of the Sacred Heart, and for spreading that devotion everywhere. This was not accomplished without great sufferings. The good Jesuit did all in his power to make known and loved the Heart of Jesus, but when it seemed all obstacles were about to disappear, his credit diminished, and his Superiors sent him to England. He returned to France exhausted and soon died.

Saint Margaret Mary was for a time Mistress of Novices, and in this office exercised a true apostolate, working to win for the Heart of Jesus the hearts of the young girls who were aspiring to religious consecration. She was persecuted when she sent one of them home, not having seen in her the indications of a genuine vocation; the family attempted to have her deposed. She remained in the charge but was deprived of Holy Communion on the First Friday of the month. This practice was one of Our Lord's specific requests; for souls who communicate nine First Fridays in succession, He promised the most wonderful graces. The demons also persecuted her visibly; nonetheless her entire Community was finally won over to devotion to the Divine Heart.

Saint Margaret Mary died at the age of forty-two years, on October 17, 1690, and everywhere was heard in the city: The Saint is dead! The Saint is dead! She was beatified in 1864 by Pope Pius IX, and canonized in 1920 by Pope Benedict XV.

What wrote St. Maximilian about sacred heart of Jesus? 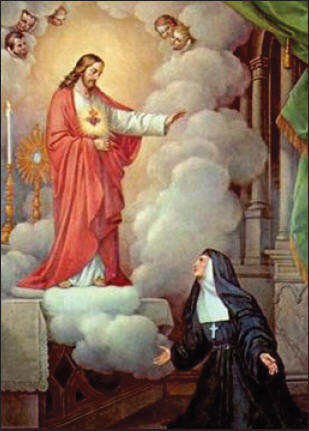