Saint Stanislaus Kostka was born in Poland in 1550, of a noble Polish family. At the age of fourteen he was sent with his older brother Paul to study at the Jesuit College in Vienna. Twice a day he would pray at length in the chapel, and he never failed to recite a crown of the Rosary. He avoided the company of students too free in their speech and behavior, and often fasted and inflicted on himself a rude discipline. His love for God did not cease to augment with these practices, and he decided to make a vow to enter the Company of Jesus. He told his confessor of it only six months later, as he wanted it to remain unknown until he would be in a position to carry it out.

He fell ill, and the demon appeared in his room under the form of a black dog which lunged at his throat. The young Saint drove him away with the sign of the Cross; but his illness was growing worse. He was lodged in the residence of a Protestant who would not permit the Blessed Sacrament to be brought to him. Saint Stanislaus remembered having read that those who invoked Saint Barbara never died without the Sacraments, and he begged that she would assist him in his danger and not permit that he die without the Viaticum. His prayer was answered; one night, when his life was despaired of, he saw this beautiful virgin-martyr, accompanied by two Angels, enter his room with the Blessed Sacrament. He was greatly consoled by this favor and another which immediately followed it; the Blessed Virgin also appeared and assured him that God wanted him to enter the Jesuit Society. Soon he felt better and was restored to complete health.

He was still too young to enter the Order in Vienna without his parents' permission; he therefore determined to go to another province where it might be possible. Stanislaus had always been gentle and cheerful, and his sanctity was felt as a reproach by his brother Paul, who had been surveying him constantly and often spoke rudely to him, even going so far as to strike him. Stanislaus nonetheless succeeded in evading him when he left for Augsbourg, dressed as a beggar, to go to Father Peter Canisius, Provincial of Upper Germany, with letters of recommendation he had received from a Father of the Company. His brother, when he realized he had left, pursued him, but even though Stanislaus was on foot, passed him by without recognizing him. A little farther on, Paul's horses refused to advance and he was obliged to return to Vienna.

Saint Peter sent Stanislaus to Rome, a very long distance in those days, over a rugged and dangerous road, where rocks, mountains and rivers made the journey very difficult. Saint Francis of Borgia received him in Rome as a treasure sent by God, and he was clothed in the Jesuit habit in October 1567. His father was very irritated, but the son answered his letters with modesty and firmness, and continued to apply himself to every practice that might lead him closer to God and religious perfection. In ten months it is said that he advanced more than many do over a period of fifty or sixty years. During those ten short months he always had Our Lady in his mind, in his heart and on his lips. A custom was introduced for the novices during his sojourn in Rome; they would turn toward Her church of Saint Mary Major and ask, kneeling, for Her benediction; this practice has been conserved in the Roman novitiate ever since that time.

The fervent novice ardently desired to be in heaven on the feast of Her Assumption; he fell ill of a fever on the 9th of August, and it was revealed to him that his desire would be fulfilled. In effect, his holy soul departed to rejoin His Heavenly Mother, when She came to claim him at a little after 3 o'clock on the morning of the 15th of August, 1568. He was eighteen years old. We often see him with the Infant Jesus in his arms, because when Our Lady came to cure him in Vienna with Her Divine Treasure in Her arms, She had placed the Infant Saviour on his bed. Many illnesses were cured at his tomb, and his body was found incorrupt three years after his death. He was soon considered as a Saint in Italy and Poland; in 1604 he was declared Blessed and was canonized in 1726. Paul Kostka wept for long years over his mistreatment of his younger brother, and was about to enter the Society of Jesus himself in 1607, when he died suddenly on November 13th, anniversary of the discovery of the incorrupt remains of Saint Stanislaus. 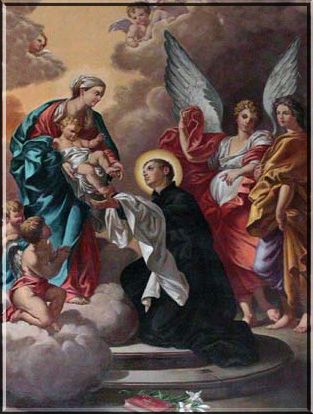 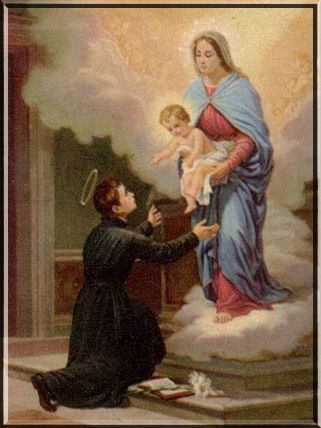 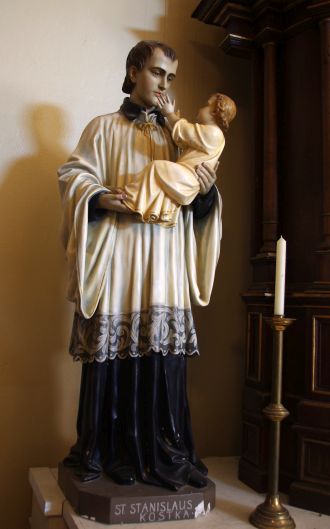