We have seen the profound meaning and the consequences of both the consecration of Russia and the revelation of the Third Secret. This allows us to now go a step further and deeper in understanding the whole meaning of the great secret of July 13th. We could call it the ‘secret of the secret’: It is the importance of the Immaculate Heart of Mary in the end times. It is the concrete application of the apocalyptic vision, the devil’s final attack mentioned in chapters 12 and 13 of the Apocalypse. The great secret of July 13th, made up of three parts, is nothing less than a Marian application of the final battle described in these chapters of the Apocalypse. In this first section of the chapter, we will compare closely Saint John’s vision with the secret of Fatima so that the Sacred Scripture might provide us a deeper understanding of that secret.

Apocalypse 12 starts with a majestic vision of Our Lady: “A great sign appeared in heaven: A woman clothed with the sun, and the moon under her feet, and on her head a crown of twelve stars” (Apocalypse 12:1). Her opponent is Satan, who threatens to destroy her. Then comes a description of events that relate to the First Secret.

a) The First Secret

First, the mortal enemy of the Immaculata appears: “And there was seen another sign in heaven. And behold a great red dragon (12:3)… And the dragon was angry against the woman, and went to make war with the rest of her seed, who keep the commandments of God and have the testimony of Jesus Christ” (12:17). The dragon, who is later referred to as the “old serpent” (12:9), is Satan himself, marked out by God’s curse in paradise: “I will put enmities between thee and the woman, and thy seed and her seed” (Genesis 3:15). Since he can do nothing to harm her, he directs all his rage at her children, the souls that he wants to ruin eternally. This is why, in the first secret, the Immaculata in Fatima showed the children the place of this worst possible misfortune: “We saw something like a sea of fire. Immersed in this fire were the devils and souls, as though they were transparent, black and orange glowing coals in human form that were swimming in this fire….The devils could be distinguished from the souls by the horrible and loathsome forms of repulsive, unknown beasts.” Yet immediately after this vision Mary showed God’s reaction, speaking about a superior way of preserving souls from these fires of Hell: “You have seen Hell, where the souls of poor sinners go. In order to preserve them from it, God wants to establish in the world the devotion to my Immaculate Heart.”

b) The Second Secret

The Book of Revelation goes on to describe the first helper of the dragon, the beast from the sea. “And I saw a beast coming up out of the sea, having seven heads and ten horns: and upon his horns, ten diadems: and upon his heads, names of blasphemy…. And the dragon gave him his own strength and great power…. And all the earth was in admiration after the beast. And they adored the dragon which gave power to the beast. And they adored the beast, saying: Who is like to the beast? And who shall be able to fight with him? And there was given to him a mouth speaking great things and blasphemies… against God, to blaspheme His name and His tabernacle and them that dwell in Heaven. And it was given unto him to make war with the saints and to overcome them. And power was given him over every tribe and people and tongue and nation. And all that dwell upon the earth adored him, whose names are not written in the book of life of the Lamb which was slain from the beginning of the world.” (Apocalypse 13:1-8) Exegetes usually see the beast in these passages as a symbol of a political world power. The second secret of Fatima corresponds to this. “If my requests are fulfilled, then Russia will be converted and there will be peace. If not, then godless propaganda will spread its errors throughout the world, stirring up wars and persecutions of the Church. The good will be martyred, and the Holy Father will have much to suffer. Many nations will be destroyed.” How can this beast arising from the sea of hellfire, i.e., anti-Christian regimes, be conquered? Through confidence in the Immaculate Heart of Mary and the recognition of her power in public, social and political life. This confidence is expressed and this recognition is made by means of consecration to the Immaculate Heart, but especially the consecration of Russia, the land that has become the chief instrument of the gigantic work of destruction accomplished by the beast, which has dragged half the world with it into the pit of communist atheism. This consecration includes conversion to the true faith, first at the individual level, but also in society and in public institutions and structures: in the Church, among the various peoples, and especially the people of Russia, and finally in the whole world.

Finally, in the Apocalypse, a second beast appears. “And I saw another beast coming up out of the earth: and he had two horns, like a lamb: and he spoke as a dragon. And he executed all the power of the former beast in his sight. And he caused the earth and them that dwell therein to adore the first beast…. And he did great signs…. And he seduced them that dwell on the earth, … saying … that they should make the image of the beast.” (Apocalypse 13:11-14) The second beast is a further emanation of the dragon. Three times the Evangelist calls it the “false prophet” (Apocalypse 16:13, 19:20 and 20:10).Therefore we are dealing here with an entity that has the power to prophesy. Thus, it is a spiritual, religious power that is in the clutches of evil. This evil is none other than unbelief, which comes “up out of the earth”, i.e. from within the Church itself; it superficially imitates Christ’s teaching and the Church itself, but in reality this heresy in the Church is inspired by the dragon and is entirely at his service (“it had horns similar to the horns of the lamb, but speaks like the dragon”).

This is the essential content of the Third Secret: the almost total destruction of the Church and a heretofore unprecedented number of apostate souls by the work of the second beast. That beast is incarnate, so to speak, in a new religious mentality that leads entire nations into the great apostasy: the orientation of the Church towards the liberal and Masonic principles of “freedom” and independence from Our Lord, towards a “fraternity” of all people which tolerates and promotes all religions.

How can this “false prophet”, this fake Christianity be overcome? Only by Our Lady, who certainly gives to her oppressed children the appropriate weapons to overcome the most brutal of all attacks: the greatest weapon is her Immaculate Heart, and the strength of her children is their “tender love and appreciation of how full of compassion she is and how much they stand in need of her help. In all circumstances, they will have recourse to her as their advocate and Mediatrix with Jesus Christ. They will see clearly that she is the safest, easiest, shortest and most perfect way of approaching Jesus and will surrender themselves to her, body and soul, without reserve in order to belong entirely to Jesus” (Treatise of the True Devotion, No 55).

d) The Great Secret: Heaven’s Response to the Final Attacks of the Anti-Trinity

What, then, is the “secret of the secret”? It is the Immaculate Heart of Mary — the all powerful apocalyptic woman and her final triumph! Despite all the terrible attacks and offensives of the devil, his apparent victories only announce and prepare the final triumph of Our Lady of Victory. God allows the darkness to become the darkest possible, for just one purpose: to manifest, by contrast, the overwhelming light emanating for the Immaculate Heart. That is why heresies have developed today at a dizzying pace: so that at the moment of the worst trial, when it appears that the truth has been crushed irrevocably, the Immaculata will triumph over all of them without exception. In this triumphant role of the Vanquisher of All Heresies, the Immaculata will appear particularly as the Mediatrix of all graces of conversion. As Co-Redemptrix she puts an end to the “abomination of desolation in the holy place” and causes the sacrifice of our redemption, the Mass of all times, to illuminate the world once again with its eternal splendour. The Mediatrix of all graces of conversion ends the era of false ecumenism. The privileges of her universal motherhood and Queenship destroy the cult of humanity, unmask the utopia of the Masonic paradise on earth and show once again the value of the last things, including especially the unending beauty of the heavenly fatherland. By offering her Immaculate Heart as a “refuge”, Our Lady of Fatima gives the world the means to overcome even the very worst temptation, namely apostasy from the faith — a means without which mankind would be completely defenceless against the “demonic wave that is sweeping the world”.

Accordingly, the three parts of the great secret of Fatima portray the three-dimensional working of Satan, who apes the Holy Trinity by operating in three different modes. The dragon strives for the ruin of souls. His two beasts are the immediate means for attaining his goal. The first beast is modern liberalism, embodied in the sects of Freemasonry and in Communism. The second beast is the new world religion, built on the foundation of false ecumenism. Opposing this monster, in its three embodiments, is the apocalyptic woman, the Immaculate Heart of Mary. Her “great secret” consists of the fact that she is the one who will crush Satan’s head. By fulfilling her will, we can save our souls in a simple way (the promise connected with devotion to the Immaculate Heart of Mary), renew the Christian world order (connected with the consecration of Russia) and finally rescue the Church (the third secret).

Cardinal Cerejeira draws the same conclusion: “From the two parts of the Secret already revealed—the third part has not been made known, but it has been written and placed in a sealed envelope and will be opened in 1960—we know enough to enable us to conclude that the salvation of the world, in this extraordinary movement of history, has been placed by God in the Immaculate Heart of Mary” (7 September 1946). 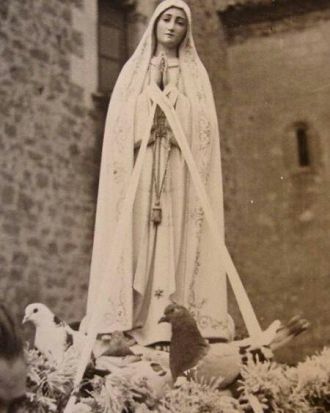 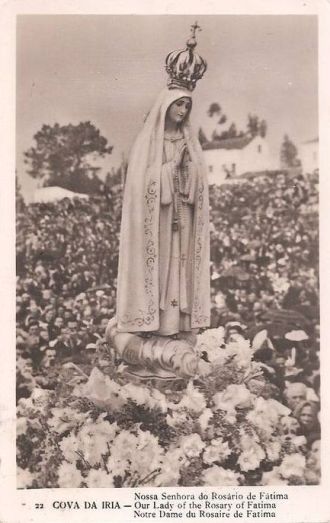