Feast of Our Lady of Divine Providence

The shrine of Our Lady of Divine Providence, or the Santuario Madonna della Divina Providenza, is situated or located in a rural district of the diocese of Fossano, Italy, called Cussanio. According to tradition, in the year 1521 the Blessed Virgin Mary appeared to a deaf mute, Bartolomeo Coppa, (sometimes spelled Bartholomew Cup). The first apparition occurred on May 8th when she cured Bartolomeo of his disability and told him to preach penance to the inhabitants of Fossano.

In a second apparition on May 11th, the Blessed Virgin brought Bartolomeo three loaves of bread and again asked him to preach penance to the people of Fossano. The latter, however, only ridiculed the visionary. A short time later, however, a plague broke out among the Fossanesse, who only then had recourse to Our Lady. After having been granted a release from the plague through the intercession of the Blessed Virgin Mary, the grateful people of the region had a chapel built which was known as Our Lady of Divine Providence. This chapel was later replaced with a larger church between 1634 and 1642.

In 1600 the Augustinian Brothers of the Congregation of Genoa came to Cussanio and the friars built the great monastery complex next to the sanctuary. During the French Revolution the convent and church were suppressed and the buildings forcibly abandoned.

Then, in the year 1872, the bishop Emiliano Manacorda, a personal friend of Saint Don Bosco, arrived at the diocese and claimed ownership of the monastery that had been wrongfully confiscated by the state and decided upon the complete renovation of the sanctuary. Work began shortly after 1875 and continued for about twenty years, and included the elevation of the majestic dome and the reconstruction of the entire façade. The nave was extended, two aisles built and the interior was adorned with altars, sculptures and paintings. Two of the paintings, attributed to the painter Giuseppe Barotto, depict the two scenes mentioned above and are now preserved in the church. 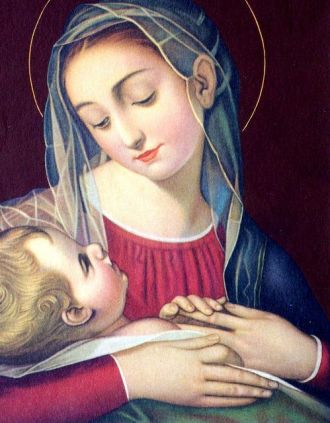