Four months passed, and Our Lady returned to Rue du Bac. On the day of the second apparition, Catherine was once again seized with a great desire to see the Blessed Virgin. Here is the story in her own words.

“I thought that the Blessed Virgin would grant me this grace, but my desire was so strong that I was convinced that I would actually see her at Her most beautiful.

On the 27th of November, 1830, which was a Saturday, and the eve of the First Sunday of Advent, while making any meditation in pro-found silence, at half past jive in the evening, I seemed to hear on the right hand side of the sanctuary something like the rustling of a silk dress. Glancing in that direction, I perceived the Blessed Virgin, standing near Saint Joseph's picture. Her height was medium, and Her countenance, indescribably beautiful. She was dressed in a robe the color of the dawn, high-necked, with plain sleeves. Her head was covered with a white veil, which floated over Her shoulders down to her feet. She wore a narrow lace band round Her hair. Her face was not concealed. Her feet rested upon a globe, or rather one half of a globe, for that was all that could be seen. Her hands which were on a level with her waist, held in an easy manner another globe, a figure of the world. Her eyes were raised to Heaven, and her countenance beamed with light as She offered the globe to Our Lord.

Suddenly, Her. .fingers were covered with rings and most beautiful precious stones. Rays of dazzling light gleamed forth from them, and the whole of her figure was enveloped in such radiance that her feet and robe were no longer visible.

The jewels varied in size as did also the rays of light they threw out. I could not express what I felt, nor what I learned, in these few moments.

As I was busy contemplating her, the Blessed Virgin fixed her eyes upon me, and a voice said in the depths of my heart: 'This globe which you see represents the whole world, especially France, and each person in particular.'

I would not know how to express the beauty and brilliancy of these rays. The Blessed Virgin added: 'Behold the symbol of the graces I shed upon those who ask me for them.' And she made me understand how pleasant it was to pray to the Blessed Virgin, how generous she is to all who implore her intercession... How many favours she grants to those who ask her for them with confidence and the joy that she experienced in granting graces! At this moment I was not myself, I was in raptures!

There now formed around the Blessed Virgin a frame rather oval in shape on which were written in letters of gold these words: 'O Mary conceived without sin, pray for us who have recourse to Thee'.

Sister Catherine noted that some of these precious stones did not emit rays, and when she expressed her astonishment at this, she was told that they were a figure of the graces we neglect to ask of Mary.

Then a voice said to me: 'Have a medal struck upon this model. All those who wear it, when it is blessed, will receive great graces especially if they wear it round the neck. Those who repeat this prayer with devotion will be in a special manner under the protection of the Mother of God. Graces will be abundantly bestowed upon those who have confidence.'

At the same instant, the oval frame seemed to turn around. Then I saw on the back of it the letter M, surmounted by a cross, with a crossbar beneath it, and under the monogram of the name of Mary, the Holy Hearts of Jesus and of His Mother; the first surrounded by a crown of thorns and the second transpierced by a sword. I was anxious to know what words must be placed on the reverse side of the medal and after many prayers, one day in meditation I seemed to hear a voice which said to me: 'The M with the Cross and the two Hearts tell enough.' 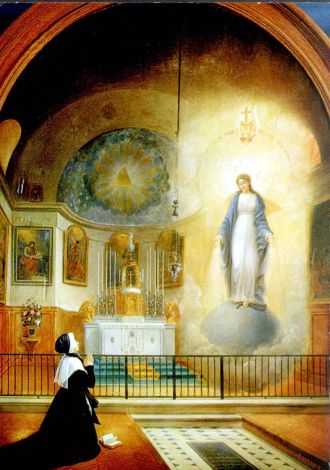 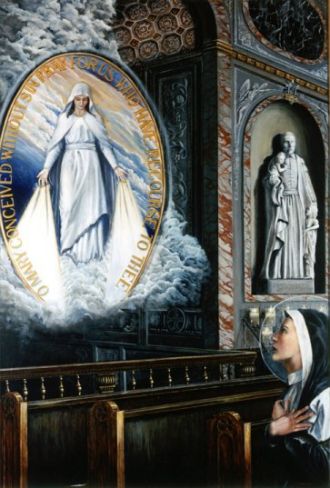 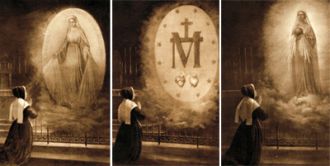 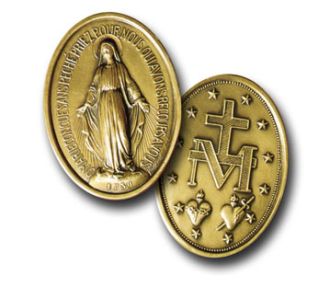