On the day of 16th October Maximilian Maria Kolbe, young subdiacon, gathered a meeting of a new society. He was accompanied by six young friars. „After an initial prayer, a letter of Fr. Alexander Basile has been read. Father Basile, being an private confessor of Holy Father, declared that he will personaly present the case of Knights of Immaculata to the Pope. He will present this project, which has already included: its main goal, means and conditions of entering. Each of this points has been discused, and one could see that the faces of participants reflected their entrust, faith and love which they confide in the project. They deliberated hard, until they achieved a satysfying result, which was a plan how to save souls through Immaculata. (…) In fact there was no chairperson of the meeting, the friars just gathered around in circle by a statue of Holy Mother lit by two candles — mentions St. Maximilian of this first reunion.

Maximilian Kolbe and his six confreres present at the founding meeting, were the first Knights of the Immaculata. It is accepted to regard the 17th of October 1917 as the beginning of The Knighthood. 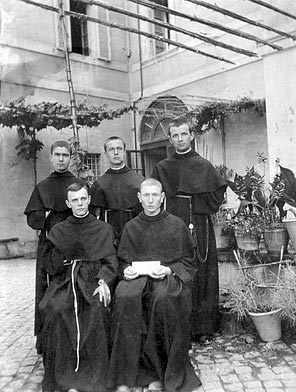 On the 28th of March 1919 the Pope Benedict XV bestowed His blessing upon the members of The Knighthood of The Immaculata and shortly afterwards the Vicar General of The Franciscans Father Dominic Tavani presented a written blessing.

On January 2, 1920 Cardinal Basil Pompilj proclaimed the official approval of The Catholic Church of the Knighthood.

Maximilian Kolbe looking upon how restless the world was and how the foes of The Church were becoming more and more relentless in their blasphemies, decided to establish a form of a brotherhood whose members would fight for the triumph of The Immaculata in every worthy and honourable way". To use all valid and legitimate means , in the different states and conditions of life, as the occasions present themselves that is entrusted to the zeal and prudence of each one. Particularly, recommended however, is spreading the Miraculous Medal".

The chief goal is: "to work for the conversion of all sinners, heretics, schismatics ,Jews etc. in particular the Freemasons, and that all become saints through the mediation of the Immaculate Virgin".

The direct reason that inspired St. Maximilian to found the Militia Immaculata were the demonstrations taking place in Rome on the occasion of the 200 anniversary of the founding of the Freemasonry. The mayor of Rome, Ernest Nathan, the Grand Master of the Freemasonry ordered celebrations of the anniversary to take place. Carrying the black banner of Giordano Brunisti, on which the Archangel Michael was depicted lying under the feet of the triumphant Lucifer, the demonstrators shouted: "Satan will rule the Vatican and the Pope will serve as his lackey".

Another event that decided St. Maximilian to establish The Knighthood of the Immaculata were the celebrations of 400 anniversary of the occurence of Martin Luther. However, those shameful anniversaries did not dominate the year 1917 — The Catholic Church was celabrating the 75 anniversary of The Blessed Virgin appearing to Alphonse Ratisbonne.

The Jew Alphonse Ratisbonne converted in the year 1842 after the Immaculate Virgin appeared to him, resembling the figure from the Miraculous Medal. Less than a month before the apparition on the request of a friend "he consented to submit to a test" and accepted from him The Miraculous Medal. He promised to recite each morning and evening the Memorare, a prayer composed by St. Bernard to the Blessed Virgin Mary.

Saint Maximilian often told the story of the conversion of Alphonse Ratisbonne, a confirmed atheist and liberal, as an example of the miraculous power of The Immaculata.

According to the wishes of the founder, The Miltia Immaculata assembled in it's ranks all men to whom the cause of The Kingdom of God on Earth was sacred.

Since 1937 Militia Immaculatae is also called the Knights of the Immaculata.

"About the Knights of the Immaculata" by St. Maximilian Kolbe — click and read
"Booklet about Militia Immaculatae by Fr. Karl Stehlin — download