“Study now to live so holy a life that you may rejoice rather than fear when your last hour comes” — Thomas A. Kempis.

The first day of Lent is called Ash Wednesday, from the custom of putting blessed ashes on the foreheads of the faithful. The ceremony originated from the practice of the early Church, which she took up from the example of the Ninivites, recommended by our Blessed Saviour. In the primitive ages of the Church at the beginning of Lent the Bishop or his Penitentiary used to cast ashes upon sinners, who came in sackcloth to the church to perform their penance, in hopes of being reconciled and absolved at the end of Lent. The ceremony is now practised towards all the faithful, because it is a time of penance for all, without exception.

These ashes were from last year’s Blessed Pamls. In ancient times, palms were used as trophies of the ancient Olympic Games. By burning them, the Church wants us to forget our past victories. We must move on to new victories, to new conquests by dying to our old, sinful self so that we can put on the new man, Our Lord Jesus Christ. Only by sharing in His passion and death that we can hope to have a share in the triumph and glory of His resurrection.

While blessing the ashes, the priest in the name of the Church begs for all her children the remission of their sins, and to that end the spirit of compunction and grace to employ as they ought the time of Lent in doing penance. During the blessing, and when getting them on our foreheads, we should join our prayers with those of the Church, and beg a contrite and humble heart — represented by the ashes — and that wholesome fear of God’s judgments (which is the beginning of wisdom) and the grace of penance. The priest signs our foreheads with the ashes in the form of a cross, and reminds us of the sentence pronounced by Almighty God upon Adam and his posterity: ‘Dust thou art, and unto dust thou shalt return.’ Gen. (3. 19) In using these words the Church intends to excite her children to penance from the consideration of death, which is the punishment of sin. consequently, we should be firmly convinced that the only true wisdom is to disengage our affections from earthly things, to love and fear God, to keep His commandments, and by doing penance to prepare for death. We shall find this easy if we frequently think on the certainly of death, the uncertainty of its time, and the eternal consequences of the condition of soul in which that moment will find us.

During Mass we ought to pray that God would be pleased to preserve these sentiments in our hearts during Lent and for the remainder of our lives.

The Emperor Theodosius, while attending a council in Milan, was informed of the murder of some of his officials at Thessalonica. He was persuaded by one of his Ministers to punish the inhabitants with great cruelty. Soldiers were let loose on the poor defenceless people while enjoying games at the circus, and seven thousand were massacred, without distinguishing the innocent from the guilty.

Saint Ambrose, the Bishop of Milan, wrote him a very tender but strong letter, exhorting him to penance, and declaring that he neither could nor would receive his offering, nor celebrate the Divine Mysteries before him, till he satisfied this obligation. Soon after the Emperor, according to custom, went to church. On the way he was informed of the Saint’s intention to exclude him, and was advised to stay away. He said, ‘I will go and receive the rebuke which I deserve.’ St. Ambrose met him at the door and forbade him to enter. The Prince, by way of extenuating his offence, said David had sinned. ‘Him whom you have followed in sinning, follow also in his repentance’ replied the holy Bishop.

Theodosius submitted, accepted the penance, and, clad in penitential garments — sackcloth and ashes — placed himself among the public penitents. He knelt at the church door, and lay prostrate, repeating with David, ‘My soul hath cleaved to the pavement: O Lord, restore my life, according to Thy word’ (Ps. 118. 25). He remained in this posture, beating his breast, and with tears rolling down his cheeks, begged pardon of God, lamenting his sin in presence of all the people, who were so touched at it as to weep and pray along with him.

Theodosius, after his absolution, passed no day until his death on which he did not bewail his offence, into which he was drawn by surprise and through the instigation of others. 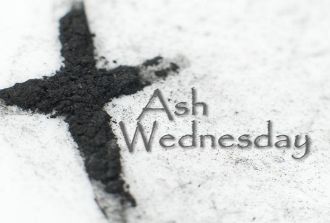 A priest marks a cross of ashes on a worshiper's forehead, the prevailing form in English-speaking countries 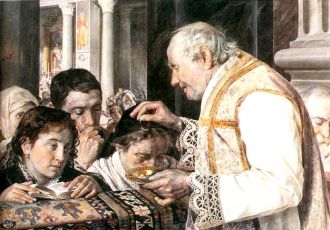 A priest sprinkling ashes on the heads of worshipers, the form prevailing in, for instance, Italy, Spain, Poland, and parts of Latin America (Polish painting, 1881)