Our Lady of Nazareth

Today we celebrate Feast Our Lady of Nazareth. The Abbot Orsini wrote: “This image was honored at Nazareth in the time of the apostles, if we may believe a writing which was found, by a hunter, attached to this image, in the year 1150.”

The Shrine of Our Lady of Nazareth, known in Portugal as Nossa Senhora da Nazare, is found in the village of Nazare on the Atlantic coast in Portugal. Indeed, the village is named after this miraculous statue of the Blessed Mother and the Christ Child that was brought to the area many centuries ago. According to tradition, this miraculous image was carved by the hands of Saint Joseph, the foster-father of Christ, while in the very presence of the Infant Jesus and the Mother of God. Later, the faces and hands of the images were painted by Saint Luke the Evangelist. This remarkable image is still preserved in a church where it can be viewed by anyone, and the story surrounding it is a fascinating one.

It is known that the statue of Our Lady of Nazareth came from the Holy Land where it was one of the oldest images ever venerated by Christians. It was saved from destruction at the hands of the iconoclasts sometime early in the 5th century by a monk named Ciriaco, who gave the statue to Saint Jerome. Saint Jerome later gave it to Saint Augustine in Africa, to protect the statue by removing it from the Holy Land. Saint Augustine then gave it into the safekeeping of the monastery of Cauliniana, near Merida, a monastery on the Iberian Peninsula.

In the early morning of September 14th in the year 1182, the mayor of Porto de Mos, Dom Fuas Roupinho, was hunting on his land when he observed a deer. Chasing it up a steep slope on horseback that misty morning, the fog became heavier all of a sudden. The deer, later suspected to be the devil in the guise of a deer, jumped off the edge of the hilltop into the empty void. Despite his efforts to stop his horse, the spirited mount was determined to follow after the deer. Helpless to save himself, the rider suddenly recognized that he was near the sacred grotto where he would often come to pray. Fuas Roupinho cried out to the Blessed Virgin, praying aloud: “Our Lady, Help Me!”

The horse stopped immediately, as if he were digging his hooves into the rocky cliff above the void. Suspended in an unnatural manner at the edge of the cliff, Fuas Rouphinho knew the drop to be over 100 meters, and surely would mean his death if he had fallen. He was then able to back slowly away from the edge, looking down to see the evidence of the impossible and unimaginable - for there in the hard stone was the imprint of one of his horse’s hooves. One of those marks can still be seen in the native rock.

Faus Rouphinho dismounted and went to the grotto to pray and give thanks, subsequently causing a chapel ‘Capela da Memoria,’ or ‘The Chapel of Remembrance,’ to be built very near the spot where his life had been miraculously saved. When the masons he had hired took apart the primitive altar in the cave, they found an ivory box of sorts that contained the relics of Saint Bras and Saint Bartholomew. There was also an ancient scroll that they carefully removed.

Opening the scroll, they found that it explained the history of the statue of the Blessed Virgin Mary and her Divine Child, now known as Our Lady of Nazareth, as outlined above.

Reflection: The beauty of the earthly paradise which God planted with His Own hand, and whither He came at the hour of the evening breeze to converse with His unfallen creatures, was a poor shadow of the loveliness of the Holy House during the eighteen years of the Hidden Life. We cannot guess at all the mysteries which were enacted within that celestial cloister. The words were few, yet m eighteen years (stay in Nazareth after the three days' loss of Jesus) they were what we, our human way, should call countless. The very silence even was a fountain of grace.

There were tens of thousands of beautiful actions, each one of which had such infinite worth that it might have redeemed the world. During those eighteen years an immeasurable universe was glorifying God all day and night. But the entire creation was as nothing to the Holy House of Nazareth. One hour of that life outweighed ages of all the rest, and nor, only outweighed it on a comparison, but outweighed it by a simple infinity. Jesus had given Himself to Mary. It seemed as if it were a sort of initiation for Mary into some' exalted regions of nameless sanctity. From that mystery there starts a period of eighteen years, during which our Blessed Lord appears to devote Himself exclusively to Mary and Joseph. It is as if He were her novice-master, and she in a long novitiate, to be professed on Calvary. It could not be waste of time. It could not be out of proportion with the work of His Public Ministry, or with the suffering of His Passion. It was in harmony with His wisdom. which was infinite. Just as the Three Years' Ministry was the Jews' time, and the Passion our time, the Eighteen Years were Mary's time.

Would it not be a hopeless task to make any calculations for the sake of approaching to that sum of love which these years produced in Mary's heart? The spiritual beauty of the Human Soul of Jesus, the contagion of His heavenly example, the attraction of all His actions, the efficacy of His superhuman words, the sight of His unveiled Heart, the visions granted from time to time of His Divine Nature and of the Person of the Word, were all so many fountains of substantial grace flowing at all hours into Mary's soul. Without special assistance she could not have lived in such vicinity to Him. She could not have survived such a superangelic process of sanctification.

Her life could not have lived with her love. If there was anything like a respite, if we may so speak, in the eagle-flight of her soul, ever on and on, and upward and upward, it was when she saw Jesus hanging His love on Joseph, and arraying with new and incomparable graces that soul which already in its grandeur surpassed all the Saints. Eighteen years with God, knowing Him to be God, eighteen years of hearing, seeing, touching, being touched by, and governing, the Creator of the universe! Is it possible for languish to unveil the mysteries of such an epoch? Which is the most imitable of God's attributes by us His creatures? Strange to say, it is His holiness. So our Lord Himself declares. We are to be perfect as God is perfect. The product, then, of all these eighteen years in Mary's soul was sanctity, and, if sanctity, therefore love. But by what means, in what ways, by the infusion of what gifts, at what rate of speed, by what accelerated flights, what mortal can so much as dream but they themselves, Mary and Joseph, on whose souls God lay thus as it were upon a resting-place?

If love belonged only to angels and to men, we should have to give it some other name when it reached the height it did in Mary. But God Himself is love. So we have an infinity to move about in, and can call Mary's sanctity by the name of love, without fear of uncrowning it of any of its highest elevations. But if our Blessed Mother could in part with Jesus at the gate of Jerusalem eighteen years ago, how will this new universe of ten thousand different kinds of love of Him, which she holds in her heart, allow her to part with Him now? This is the one sense in which each dolor outstrips its predecessor, that it has more love to torture, and therefore more power of inflicting pain. So much power it has, that omnipotence must stand by to hold the life in that dear heart, which is dearer to Him than all the world beside. 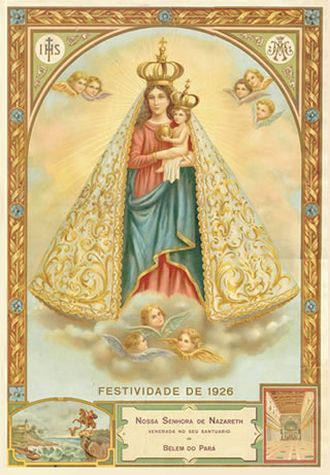 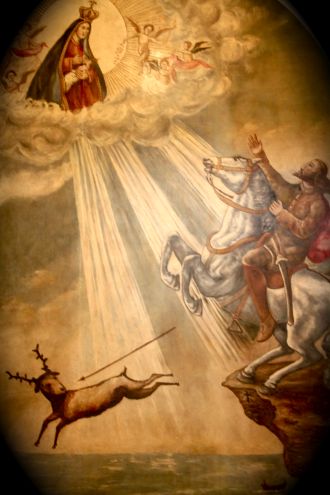 Fuas Roupinho cried out to the Blessed Virgin, praying aloud: “Our Lady, Help Me!”

An another statue of Our Lady of Nazareth 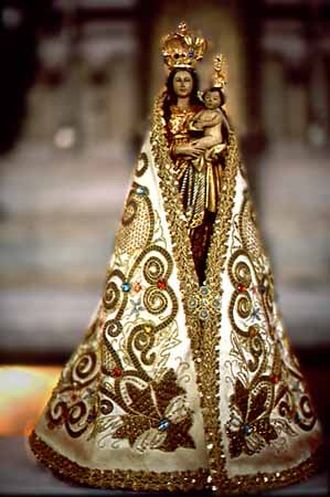 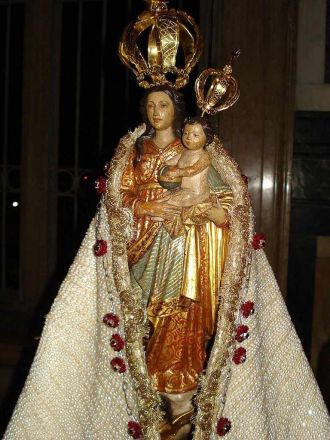