The Passion may be said to begin on the Thursday in Holy Week in the house of Lazarus at Bethany. Mary, as might have been expected, opened the long avenue of sorrows, great epochs in substance, though brief in time. Jesus had entered Jerusalem on Palm Sunday in the modesty of His well-known triumph. He had spent that day teaching in the temple, as well as the following Monday and Tuesday, returning however to Bethany at nights, as no one in Jerusalem had the courage to offer Him hospitality, as the rulers were incensed with Him because of the recent resurrection of Lazarus, and none of those who had cried Hosanna on Sunday had the courage to put themselves forward individually and so draw the resentful notice of the chief priests upon them.

The Wednesday He is supposed to have spent in prayer on the Mount of Olives, and to have seen the elect of all ages of the world pass before Him in procession, while He prayed severally for each. Judas meanwhile was arranging his treachery with the rulers. It is supposed also that our Blessed Saviour spent the Wednesday night out of doors praying in the recesses of the hill. On the Thursday morning He went to Bethany to bid His Mother farewell, and to obtain her consent to His Passion, as He had before done to His Incarnation. Not that it was necessary in the first case as it was in the last, but it was fitting and convenient to the perfection of His filial obedience.

Sister Mary of Agreda in her revelations describes the affecting scene, how Jesus knelt to His Mother, and begged her blessing, how she refused to bless her God, and fell upon her knees and worshipped Him as her Creator, how He persisted, how they both remained upon their knees, and how at last she blessed Him, and He blessed her. Who can doubt but that He also enriched with a special blessing His beloved Magdalen, the first and most favored of all the daughters of Mary? He then went to Jerusalem, whither His Mother followed Him, together with Magdalen, in order that she might receive the Blessed Sacrament. The last Supper, the First Mass, took place that night, our Lord's first unbloody Sacrifice, to be followed on the morrow by that dreadful one of blood.

By a miraculous grace she assists, in spirit, at the Agony in the Garden, sees our Lord's Heart unveiled throughout, and feels in herself, and according to her measure, a corresponding agony. She sees the treachery of Judas consummated, in spite of her intense prayers for that unhappy soul. Then the curtain falls; the vision grows dim; she is left for a while to the anguish of uncertainty. With the brave, gentle Magdalen, she goes forth into the streets. She tries to gain admittance both to the houses of Annas and Caiaphas, but is repulsed, as she was at Bethlehem three-and-thirty years ago. She hears the voice of Jesus; she hears also the blow given to her Beloved. Jesus is put in prison for the night; and St. John comes forth, and leads our Blessed Mother home to the house in which the last Supper had been eaten.

Taken from book by Father Frederick William Faber “At the foot of the Cross”. 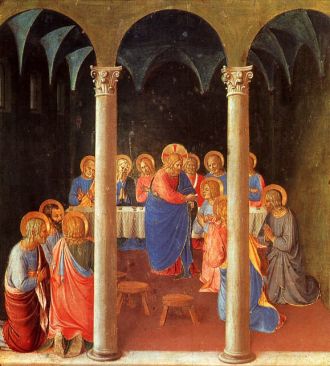 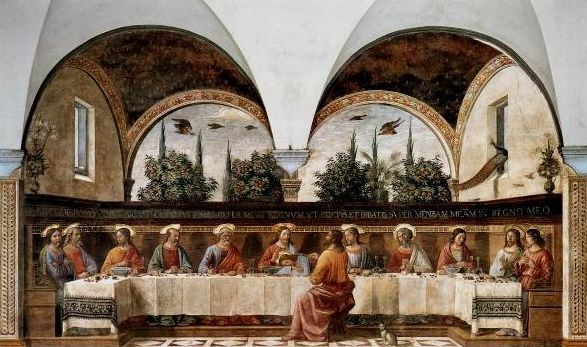