The 103rd Anniversary of priesthood of St. Maximilian

Father Maximilian received the Sacrament of Holy Orders on April 28, 1918 in the Church of Sant'Andrea delle Valle from Cardinal Vicar of Rome, Basil Pompilj. In a letter to his mother, he reminiscences those moments: „There were more than a hundred of us from various religious orders and secular clerics; of different nationalities. There was even one Negroe amongst us and another amongst the cardinals. How wonderful to behold all barriers vanquished: everybody united by the bond of the Catholic religion and brotherly love in Jesus Christ!”.

Next he describes the ceremony itself and reflects thereupon: „I am so very grateful and look upon this as a gift received through the intercession of the Immaculata. How many times in my life, especially in important moments, have I experienced Her special help and protection. Glory be to the most Sacred Heart of Jesus through the Immaculate Conception, who is the instrument in the hands of God's Mercy: to bestow graces. I entrust my future completely to The Immaculata”.

Desiring the help of the Mother of God to conquer lost souls for Her, he offered his first Holy Mass on April 29, 1918, on the same altar, that The Immaculata had appeared to Ratisbonne in the Church of Sant'Andrea delle Fratte in Rome. The next day, at the Basilica of St. Peter, he offered a votive Mass of St. Peter and St. Paul. The intention of The Mass celebrated at the altar of the Prince of the Disciples was: „the grace of apostolate and martyrdom”.

Father Maximilian rejoyced in the honour of priesthood. His soul was full of zeal. He knew that „we poor, finite creatures”, who cannot give Him „the glory He is worthy of”, should at least try to „contribute, as far as possible, to God's glory”. Alas, he was well aware how little fervor to promulgate the glory of God have his contemporaries. „There is in our times”, he wrote, „the greatest desease of all- indifference”. However well he understood this, it did not stop his fear of becoming like others. Therefore, he now asked to be worthy of the amazing grace and honour of priesthood.

On July 22, 1919 father Maximilian received the degree of Doctorate in Theology and began preparations for the return to Poland. On the night of July 28–29, after a five day journey on a Red Cross train, he reached his Homeland.

His superiors decided he should lecture on the history of the Church in Cracow.

Father Kolbe enthusiastically began his task as a professor. At the same time he was thinking about the society founded in 1917... 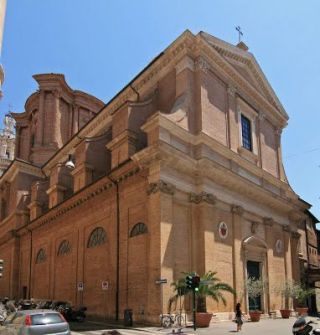 The Church of Sant'Andrea delle Fratte