On the 1st of May 1955, Pope Pius XII granted a public audience to the Catholic Association of Italian Workers, whose members had gathered in Saint Peter's Square to celebrate the tenth anniversary of their society. They were solemnly renewing, in common, their promise of loyalty to the social doctrine of the Church, and it was on that day that the Pope instituted the liturgical feast of May 1st, in honor of Saint Joseph the Worker. He assured his audience and the working people of the world: You have beside you a shepherd, a defender and a father in Saint Joseph, the carpenter whom God in His providence chose to be the virginal father of Jesus and the head of the Holy Family. He is silent but has excellent hearing, and his intercession is very powerful over the Heart of the Saviour.

We can conclude from the role for which Saint Joseph was chosen and named by Heaven that he was a man of tried virtue and consummate holiness. No other mortal man would ever hold a higher office. Saint Joseph surpassed all the Saints of the Old Law in sanctity; in him the virtue of his ancestors reached its culmination and perfection. Like Abraham, he was a man of faith and obedience; like Isaac, one of prayer and vision; like Jacob, he was patient and self-sacrificing; like Joseph of Egypt, his chastity was inviolable. And like David, of whom he is the direct descendant, he is a royal intercessor according to the heart of God. Ite ad Joseph — Go to Joseph; to Joseph of Egypt, the pharaoh told the needy to go for assistance to receive the grain that would save their lives. To the new Joseph, the just man to whom the Son of God Himself was subject as to a father, all Christians can go with confidence, and he will see to their spiritual and temporal needs with paternal goodness. 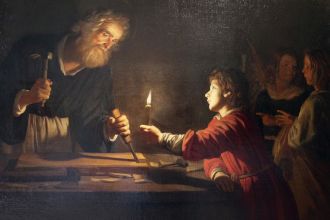