Our Lady Mediatrix of all Graces

May is the month of Mary, our blessed Lady and Mother of God. Today we celebrate a wonderful Marian feast, with a beautiful Office. It honors our Blessed Lady's role in the salvation of mankind as mother of our Savior, and recognizes her universal mediation in the dispensing of all graces that come to us from Our Lord Jesus Christ. In his encyclical Octobri Mense (On the Rosary, September 22, 1891), Pope Leo XIII declared "We may affirm that nothing, by the will of God, is given to us without Mary's mediation, in such way that just as no one can approach the almighty Father but through His Son, like wise no one, so to speak, can approach Christ but through His Mother".

This consoling truth is the heart of the M.I. and the central focus of the life of a Knight of the Immaculata.

St. Maximilian wrote:"The movement of the Militia Immaculatæ is founded upon this truth, namely that Mary is the Mediatrix of all graces. If she were not, then our work and our striving would be in vain.""

Every single grace for souls comes from the hands of the Mediatrix of all graces, and there is no moment in which she is not sending fresh graces to every individual soul: graces that illuminate the mind, strengthen the will, encourage good deeds; ordinary and extraordinary graces; graces that pertain to earthly life and graces that sanctify the soul. Only at the last judgment and in heaven will we learn how much our loving heavenly Mother cares for each soul, for each of her children, in order to transform them according to Jesus, the model.

As Christ became for her the source of graces, so she wishes to be for us the distributor of graces. Every grace is produced by the life of the Holy Trinity: the Father eternally begets the Son, and the Holy Ghost proceeds from them. From this flows every perfection in all created order. Every grace comes from the Father, who eternally begets the Son and brings forth the grace with regard to the Son. The Holy Ghost, who eternally proceeds from the Father and the Son, forms this grace in the Immaculata and through her forms souls according to the likeness of the firstborn God-man.

Hence the truth of Mary’s mediation of graces is the theological basis for the statement that the Knight can become an instrument of the Immaculata to such a degree that she prays in him (even more than he prays in her), and that in him she makes sacrifices, speaks, vanquishes all heresies, converts and sanctifies souls and finally crushes the head of the serpent.

What, then, does our path of life on earth consist of? What are we to do in this valley of tears? What is the truly meaningful, deep-seated purpose of our existence? The Heart of the Immaculata gives a clear answer to this question as well: “Pray and make sacrifices, for so many souls are lost because there is no one who prays and makes sacrifices for them,” she said on the 19th of August 1917 in Fatima. All of our pursuits, our actions, the various circumstances, where, when and how something happens, is still only the surface of our life, the external, visible side. The inner reality, though, the meaning of it all, consists in pleasing God, serving the Truth, following the pathway to heaven and leading others there. In other words: The Mediatrix of all graces wants us to continue, as it were, this mediation in souls, so that we might be channels, instruments, in order to pour out the graces of conversion and sanctification upon as many souls as possible.

St. Maximilian wrote:"If Mary is the Mediatrix of all graces, then we can become channels of grace to the extent that we draw close to her. Then, however, we become mediators of the graces that pour into us from the Father through the Son (who won them) and the Immaculata (who is their custodian), and through us into the souls of others."" 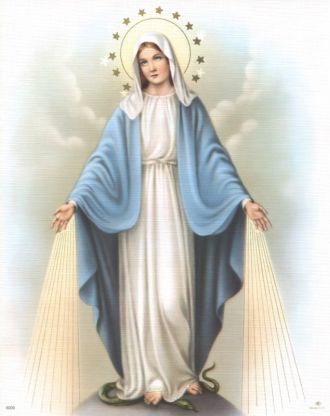