Our Lady and the Forty Days

In the Gospel account, the Blessed Virgin is not mentioned from the burial of Jesus to Pentecost. Is it conceivable that she would have been absent at the time of the revelations of the risen Christ? Is it possible that this silence is meant to be an implication that Mary had nothing to do with the saving work of Christ? Among the great amount of evidence that show us Mary's presence - albeit hidden and infinitely discreet - at the centre of the work of redemption, let us mention one example more:

With this word, the similarity, the deepest union of the family bond, and the parity of rights and duties are expressed.

The Lord could not have used a more captivating title, more expressive of that loving union with Himself and of that spiritual consanguinity to which He calls them.

"My brothers" - this word is also the typical expression of His divine and very sweet mercy, the response of His inexhaustible divine goodness, His loving kindness for the faithfulness of His own. And this at the very moment when the distance between their pusillanimity, their denial, their flight and His resurrection in the new state of glory and triumph has increased. In front of their unbelief and doubts, Jesus does not hesitate to call them by the most stimulating and tender word: "brothers".

But if they are His brothers, then they are the sons of Mary. Precisely because they have become Mary's sons, He now calls them "my brothers! And we understand why our Lord did not call them that before His Passion, because it was only at the foot of the Cross that Mary really became their mother ("here is your Son - here is your Mother").

It is therefore by looking at His Mother that Jesus addresses them as His brothers, giving them the necessary instructions during the forty days after His resurrection. It is under the aegis of his Mother that He prepares His "brothers" for their mission to go into the whole world in His Name to announce the Truth and give Life. And if after the 40 days He will ascend to Heaven, His brothers will always be enveloped in the protection of His Mother who has also become their Mother, thus a source of courage and consolation in their apostolic works, comfort and maternal mercy in the darkest hours of their missionary life.

We too have the privilege of being "brothers of Jesus" through our baptism. So to us too He addresses during this Easter season: "You are my brothers, because I have given you my Mother as your Mother. 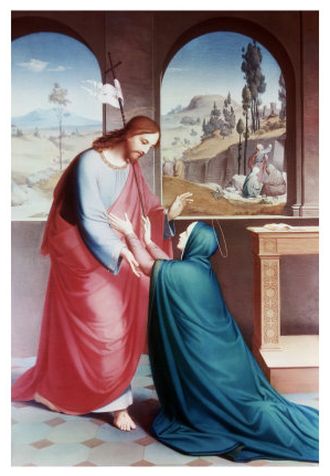