Ascension of Our Lord Jesus Christ

During forty days after His Resurrection our Lord appeared many times and in diverse places and circumstances to His disciples and others. He walked and talked with them. He permitted them to see and put their hands into His wounds, and He ate with them; thus proving by the most incontestable arguments that He was really risen from the dead, and was again living in His own body. It was also during those forty days that our Saviour gave His Apostles final instructions concerning His Church.

Our Lord ascended into Heaven. Filled with the Spirit of God, and contemplating the blessed and glorious ascension of our Lord into heaven, the prophet David exhorts all to celebrate that splendid triumph with the greatest joy and gladness. "Clap your hands," said he, "all ye nations: shout unto God with the voice of joy. . . . God is ascended with jubilee, and the Lord with the sound of trumpet." The pastor will hence learn the obligation imposed on him of explaining this mystery with unremitting assiduity, and of taking especial care that the faithful not only see it with the light of faith, and of the understanding, but still more, that, as far as it is in his power to accomplish, they make it their study, with the divine assistance, to reflect its image in their lives and actions.

Our Lord ascended into heaven because the glorious kingdom of the highest heavens, not the obscure abode of this earth, presented a suitable dwelling place to Him whose glorified body, rising from the tomb, was clothed with immortality. He ascended, not only to possess the throne of glory and the kingdom which He purchased at the price of His blood, but also to attend to whatever regards the salvation of His people. He ascended to prove thereby that His; "kingdom is not of this world," for the kingdoms of this world are earthly and transient, and are based upon wealth and the power of the flesh; but the kingdom of Christ is not, as the Jews expected, an earthly, but a spiritual and eternal kingdom. Its riches, too, are spiritual, as He shows by placing His throne in the heavens, where they who seek most earnestly the things that are of God abound most in riches and in abundance of all good things, according to these words of St. James: " Hath not God chosen the poor in this world, rich in faith, and heirs of the kingdom which God hath promised to them that love him?" 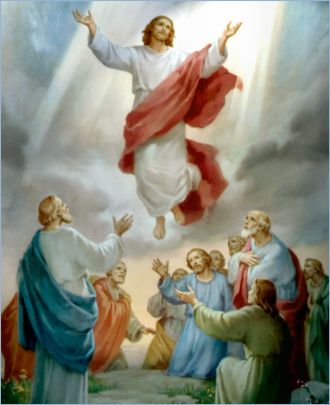