Today is the 13th of May. It the 104th Anniversary of Apparition of Our Lady in Fatima. We continue read text about the Third Secret. Today we propose the commentary of Fr. Stehlin in text called: “The Disclosure of the Third Secret” (part IX).

The revelation of the essence of the third Secret is a solemn reminder for each Catholic, but especially for priests, about the unum necessarium. Our Lady teaches her children about the final attacks of the devil and gives the remedies, not only in a general way, as she did already before (especially through her privileged instrument St. Louis-Marie Grignion de Montfort, and in her apparitions in Quito and La Salette), but in a very specific and concrete way.

1. The Third Secret and the Catholic Faith

The loss of the Faith is the worst of all calamities, because it makes souls blind to the way to Heaven and delivers them into the power of the prince of darkness. Now, the loss of the Faith has generally always been provoked from ‘outside the Church’, from heresies or from anti-Christian ideologies, about which Our Lady spoke in the Second Secret. However, Modernism, which Saint Pius X refers to as the worst of all heresies, their melting pot, threatens the Church from within. The Third Secret is a solemn warning about this most efficacious and most skilful strategy of Satan. It is an entreaty from the best of all mothers to preserve her children from the worst: in Fatima, she gives important details to on a level not seen in her other apparitions: exact dates, and how everything will happen!

Yet more important are the remedies given by Our Lady: they are the expression of the role of Our Lady in the latter times. She is truly our last and unique hope to remain faithful and conserve the most precious light received from Heaven: the unchangeable Catholic Truth. The Rosary is the contemplation of the Truth in her light. It keeps our mind constantly oriented towards Our Lord, fixes our eyes on the mystery of our salvation and the perspective of happiness “not in this, but in the next world”. The Immaculate Heart is perpetually occupied in helping us in all of our needs, to crush Satan’s head and to lift us up in the midst of temptations.

2. The Third Secret and the mystery of the Church

Outside the Church there is no salvation! This truth of our Faith applies to all times, but especially to the last times. That is the reason why the devil strives to destroy the Church or at least to harm and prevent the graces of conversion and salvation from reaching people. The Third Secret denounces the last and final attack to overcome the City of God, and in particular, the strategy to corrupt the shepherds, so that the sheep go astray.

Our Lady insists on the most important role of the Pope: if he is faithful and fulfils her requests, it will be of the greatest benefit to the whole Church, innumerable people and finally the whole world. If he refuses, his disobedience will cause the greatest calamities and catastrophes for the Church, the whole world and will put innumerable souls under the domination of Satan and ultimately will result in their eternal damnation. But it would be an immense error to attribute all calamities to the Holy Father alone. Jacinta and Lucia constantly repeated that we need to pray a lot for the Holy Father. His refusal to heed Our Lady’s requests is, to an important extent, an echo of the refusal and indifference of the whole Catholic world towards the love of its Heavenly Mother. It is interesting that Jacinta’s vision of the Holy Father weeping and praying with many people is directly linked to the Third Secret, as Lucia expressly stated. The Church is the Mystical Body of Christ: certainly the head of the Body, the Pope and bishops, have the role of leadership, but the Church also depends on the lay members of the Church, on their prayers and sacrifices, as to whether God will give the Church pious and faithful leaders.

The Third Secret also shows the precise role of the Immaculate Heart in the Church: she brings victory and prosperity and strengthens the faithful and hierarchy to be HER INSTRUMENTS to crush Satan’s head and to vanquish all heresies all over the world.

But if the hierarchy fails and the shepherds abandon the sheep, this best heavenly Mother doesn’t abandon them, but calls without discouragement for the conversion of the leaders, and gives special means of salvation to the abandoned sheep. She is always in the Church and never outside. She always works with the structure established by her Son and will always pour out her mercy on whosoever comes to her Immaculate Heart, the “refuge and way to God”, be it pope, bishop, priest or simple faithful.

3. The Third Secret and the Mystery of Eternal Salvation and Damnation

The constant concern and worry of Our Lady here reaches its highest pitch: nothing sends more souls to Hell than the loss of the Faith and the failure of the pastors. The Third Secret somehow brings all the important themes of Fatima to their greatest possible extent and final term: the spiritual fight, the triumph of the enemy, the importance of the Faith, the Rosary, the Immaculate Heart, but before all others the mystery of salvation or damnation: either total ruin and loss of “many, many”; or incredible victory and miraculous salvation of equally many — all dependent on the “yes” or the “no” towards Our Lady of Fatima!

The Third Secret is a clear and precise illustration of the prophecies of St. Louis-Marie Grignion de Montfort, when he wrote about the latter times, that “Satan, knowing that he has little time — even less now than ever — to destroy souls, intensifies his efforts and his onslaughts every day. He will not hesitate to stir up savage persecutions and set treacherous snares for Mary's faithful servants and children whom he finds more difficult to overcome than others.” The Third Secret reveals the most terrible weapon of the enemy of humankind, a weapon which succeeds most efficaciously for the loss of the greatest number of souls forever. But the same Secret also contains the consoling revelation of HER to whom alone God promised the final victory over the serpent — at the end: “In these latter times Mary must shine forth more than ever in mercy, power and grace; in mercy, to bring back and welcome lovingly the poor sinners and wanderers who are to be converted and return to the Catholic Church; in power, to combat the enemies of God who will rise up menacingly to seduce and crush, by promises and threats, all those who oppose them; finally, she must shine forth in grace to inspire and support the valiant soldiers and loyal servants of Jesus Christ who are fighting for His cause.”

Therefore, the third Secret awakens consciences and shows everyone the imminent danger, which we are in, of falling into Hell. But instead of making us afraid of the overwhelming army and power of the tempter, or pusillanimous before the multitude of the enemies, we receive more than ever before from HERSELF the necessary graces to vanquish, through her, Satan and all heresies all over the world.

Could it not be the disposition of Divine Providence, that as long as Fatima is despised, the Secret will not be published? But at the moment of deepest despair, when all the cataclysms announced in the Secret will have taken place and almost destroyed the Church, when the great Secret is about to be fulfilled in its last consequences, the Holy Father, faced with the terrible evidence, will finally understand the fatal errors and diabolical disorientations that have been devastating the Church since Vatican II.

First, the Secret of Fatima will have demonstrated its authenticity by the realisation of its prophecies. The disclosure of the Great Secret will be like Heaven’s commentary on all that has happened since 1960, the clear proof that the post-conciliar “renewal” was not only a failure, but the most terrible attack of Satan against Our Lord, against His Mother, and against the Church. The discovery of the full extent of the Modernist revolution with all its consequences is a very complicated thing: it needs a wide and exact knowledge of theology, morals, of the rules of discernment of the spirits, of the long history of liberalism and modernism within the Church. And even then, it is very difficult, and even impossible, for most of the faithful to accept that this revolution came from the head of the Church, the shepherds etc. However, with the disclosure of the Secret, everything becomes easy and evident: the simplest children of Our Lady will understand and accept what their Heavenly Mother clearly announced 100 years before. Thanks to that revelation, they will also easily understand the mortal trap and imminent danger of the devil’s final attack, and with this diagnosis they will be more eager to care for the sake of their souls.

Secondly, more than anybody else, the Pope himself will be the beneficiary of this disclosure. Facing the total ruin of the Church and being deprived of all other means to save the Church and multitudes of souls (simply because almost everybody will have lost the Faith, including priests and bishops), he will be obliged to turn finally to Our Lady as the last hope for himself and for the Church. What a simple thing for him to turn towards the remnants of the Church and explain: “Look, all this Our Lady announced in 1917, all these prophecies have been realized to the letter! All seems to be lost now. Only one promise is left: the promise of the Immaculate Heart! And this promise is the most beautiful and efficacious one: as in her incredible mercy, SHE shows us the means of salvation and gives us the most powerful weapons, we can be sure, that if we follow her, she will fulfil her promises, even if it is “very late”, for it is “never too late”. 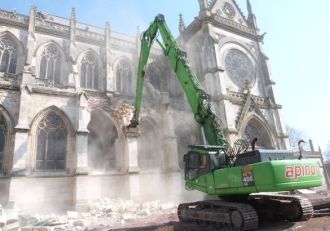