St. Maximilian in the concentration camp

On the 28th of May 1941 along with many other prisoners, he was transferred in a railway cargo truck to Auschwitz as prisoner #16670. Despite their predicament, Fr. Kolbe strove to raise their spirits with prayers, and got them to sing national songs, and to join him in discourse, to the point where they could almost forget what had befallen them.

The Saint in Auschwitz

The procedure on arrival at Auschwitz was for prisoners to be subjected to cold showers and belittled by the barbs and obscene remarks of the guards after which they had to don a prison uniform with blue and grey vertical stripes and carrying an identification number. Fr. Kolbe’s uniform had a red triangle over his heart to identify him as a priest. Priests and Jews were singled out for especially inhumane treatment, and could be assured of an early death. His Division Captain at Auschwitz bore the name of Krott and he had a reputation for being particularly fiendish and merciless, giving the very worst of the tasks to those in his keeping. Examples of these tasks were to load and carry gravel, cut and carry lumber on their backs, clear away manure, move away corpses, all in silence and with no rest breaks. Any sign of slowing down earned the prisoner a lashing, a kicking and a pitiless beating. Having lost one of his lungs to tuberculosis, Fr. Kolbe struggled to keep going, and was beaten, kicked and insulted every time he fell over. No-one could help him, much as they wanted to, because anyone who tried was severely beaten. He urged his sympathisers not to expose themselves to these beatings, assuring them that the Immaculata was helping him and that he would manage alone. He reminded them on other occasions that their sufferings were in the service of the Immaculata. He treated his sufferings as if he were doing the Stations of the Cross, just as Our Lord did on His painful journey to Calvary.

Fr. Kolbe continued to display incredible calm in the most provocative of assaults. In one instance a guard approached him with a police dog. In his opinion, Fr. Kolbe was not working hard enough, so first he struck him and then set the dog on him. There was no complaint from Fr. Kolbe, much to the amazement of the prisoner with whom he was working. In another instance, it was Captain Krott’s turn to vent his spite on Fr. Kolbe. He had Fr. Kolbe loaded with an enormous amount of logs and then ordered him to run with it. After only a very few steps, Fr. Kolbe collapsed, as might be expected given his age and state of health. Captain Krott then went berserk and kicked Fr. Kolbe in the face and stomach, and also beat him with a rod and shouted furiously, “So you don't like to work! I will let you see what work means!” Shouting and blaspheming, Krott made him stretch out on a tree trunk before everybody and had one of the huskier guards give him fifty lashes with a whip. This left Fr. Kolbe almost lifeless. He appeared dead. His body was thrown into a ditch and covered with brushwood. Later some companions helped him regain consciousness. Somehow he was smuggled into the infirmary, where his case was diagnosed as “pneumonia with general weakness.” Poor Fr. Kolbe, in imitation of his divine Model, chose to remain meek and sweet as a lamb throughout it all.

What could be the Saint’s secret?

This question must have been in the heads of so many of his fellow prisoners, noting his reaction to being so mercilessly beaten, insulted, belittled, and yet never complaining. All of them were hungry and not far from death, and yet Fr. Kolbe acted as though these were mere trifles which did not concern him — he simply did not discuss them — it was as if he were in another world, immersed in God and deep in prayer. In fact, the first thing that many of them came to learn about him was his spirit of prayer.

He never failed to use an opportunity to turn his fellow prisoner’s attention to the holy Virgin. When someone who was in desolate spirits approached him, Father Kolbe knew how to turn him to the Immaculate Virgin by saying, “She is the Comfort of the Afflicted. She is listening to us all and helping us all.” No one could deny this because all had seen how he had triumphed despite beatings and whippings, insults, deprivations — he had been through them all. “Love is a creative power” he would declare to them. Rosary beads were forbidden at the camp, so Fr Kolbe would say his rosary on his fingers, and this was a common sight which remained in the memories of many of his fellow prisoners.

One day he discovered that a prisoner was an artist, and asked him to make two pencil sketches of Our Lord and of the Blessed Virgin Mary. He carried these with him regardless of the fact that to be caught with them would have earned him another beating — but he placed great store by them. Sadly he lost them, but he quickly managed to have them replaced, such was their importance in his prayer life. This prayer life was indeed a major part of Fr. Kolbe’s ability to cope with his beatings.

He could have lain in his bed and recited his rosary unbeknown to the guards — but no. That was not acceptable to him, and he would kneel at the side of his bed instead. A fellow prisoner warned him that he ran the risk of a beating if a guard saw him, but he answered: “Go to sleep, son, I'm already an old man and I shall pray for you.”

Another sign of his fearlessness was that he would bless himself with the sign of the cross before starting a meal, with no thought that he might be struck by a guard for his action.

On two occasions, but only two, Fr. Kolbe was able to celebrate Holy Mass which was strictly forbidden there. At other times, to symbolically and reverently commemorate Holy Communion, he used to take his portion of bread, bless it, and give a little piece of it to each one. St. Francis of Assisi had done the same with his friars a few days before his death.

The Saint defies the circumstances

It was exceedingly difficult for Fr. Kolbe to live out his vocation in the circumstances prevailing at Auschwitz, with guards constantly looking out for any signs of religious practice and administering beatings for even small transgressions. There have been many examples already to show that Fr. Kolbe was not deterred by this. He managed to hear confessions, to preach uplifting sermons, to distribute Miraculous Medals when he was able to obtain any. He continued to be true to his vocation in the huts for prisoners and in the hospital, crawling across the floor from bed to bed if necessary in order not to be seen by the guards as getting caught carried the risk of being shot.

One prisoner related an event where he and Fr. Kolbe were ordered to take corpses to the crematorium. One particular corpse showed signs of having been brutally tortured and the prisoner felt rooted to the spot. The guard showed his impatience and the prisoner heard a familiar voice saying calmly: “Let us take him, brother.” He forced himself forward and lifted the corpse on to the barrow, and then a second one. He was wishing to himself that he was that corpse when he heard that same voice saying: “Holy Mary, pray for us.” He shuddered as if having received an electric shock, and he felt strength flowing through him. After delivering the corpses to the crematorium and beginning the walk back, he heard Fr. Kolbe whisper in Latin: “Eternal rest grant unto them, O Lord." This was followed by: “And the Word was made Flesh.”

So even in the greatest of danger had he been heard, Fr. Kolbe managed to do the best he could for those poor souls he had just delivered to the crematorium.

The food was of poor quality and came in very small portions. Men fought over it in order to have enough to stay alive, but Fr. Kolbe set an example to all by giving away his own portion to those who really needed it, and his friends had to insist that he kept some of it for himself. He never missed an opportunity to try and restore peace when such quarrels broke out.

He was never heard to criticise their cruel captors, in fact he prayed for them and for their conversion to the faith, and urged others to do the same. Whenever he received a beating he would say: “May God forgive you” and: “Father forgive them” just as Our Lord prayed from the Cross for His executioners.

His selflessness was well known. He even exchanged his own sandals for a pair in worse condition from another prisoner, and he washed another prisoner’s porridge bowl for him after that prisoner had been beaten for not doing the job well enough in the first place. 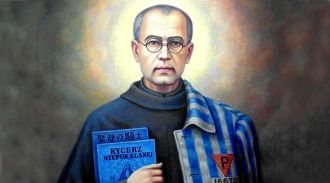 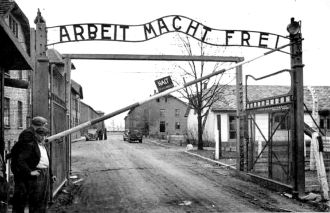 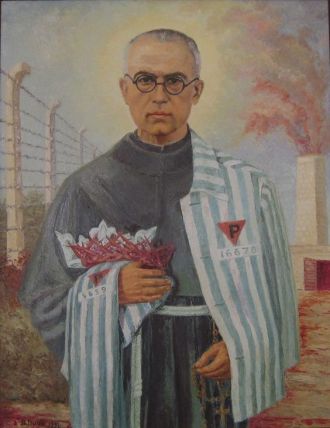