Queenship of the Blessed Virgin Mary

Today is Feast of the Queenship of Mary. Pope Pius XII established this Feast and commanded celebrated throughout the world. Pope commanded that on that day each year, the world should renew its consecration to Her.

On the 11th of October 1954, Pope Pius XII established the Feast of the Queenship of Mary by Encyclical “Ad Caeli Reginam”. Here he proposed the traditional doctrine regarding the queenship of Mary and established for the universal church the liturgical feast of Mary, the Queen.

St. Alphonsus Liguori in book "The Glories of Mary" about Mary, Our Queen, Our Mother wrote:

How great should be our Confidence in Mary, who is the Queen of Mercy. As the glorious Virgin Mary has been raised to the dignity of Mother of the King of kings, it is not without reason that the Church honors her, and wishes her to be honored by all, with the glorious title of Queen.

And if Jesus is the King of the universe, Mary is also its Queen. "And as Queen," says the Abbot Rupert, "she possesses, by right, the whole kingdom of her Son". Hence St. Bernardine of Sienna concludes that "as many creatures as there are who serve God, so many they are who serve Mary: for as angels and men, and all things that are in heaven and on earth, are subject to the empire of God, so are they also under the dominion of Mary!" The Abbot Guerricus, addressing himself to the divine Mother on this subject, says: "Continue, Mary, continue to dispose with confidence of the riches of thy Son; act as Queen, Mother and Spouse of the King: for to thee belongs dominion and power over all creatures!"

Mary, then, is a Queen: but, for our common consolation, be it known that she is a Queen so sweet, clement, and so ready to help us in our miseries, that the holy Church wills that we should salute her in this prayer under the title of Queen of Mercy.

"The title of Queen," remarks Blessed Albert the Great, "differs from that of Empress, which implies severity and rigor, in signifying compassion and charity towards the poor." Kings should, then, occupy themselves principally in works of mercy, but not so as to forget the just punishments that are to be inflicted on the guilty. It is, however, not thus with Mary, who, although a Queen, is not a queen of justice, intent on the punishment of the wicked, but a queen of mercy, intent only on commiserating and pardoning sinners. And this is the reason for which the Church requires that we should expressly call her "the Queen of Mercy." The kingdom of God, consisting in justice and mercy, was divided by our Lord: the kingdom of justice he reserved for himself, and that of mercy he yielded to Mary, ordaining at the same time that all mercies that are dispensed to men should pass through the hands of Mary, and be disposed of by her at will.

St. Bernard asks why the Church calls Mary "the Queen of Mercy"? And he replies, that "it is because we believe that she opens the abyss of the mercy of God to whomsoever she wills, when she wills, and as she wills; so that there is no sinner, however great, who is lost if Mary protects him".

But perhaps we may fear that Mary would not deign to interpose for some sinners, because they are so overloaded with crimes? Or perhaps we ought to be overawed at the majesty and holiness of this great Queen? "No," says St. Gregory VII; "for the higher and more holy she is, the greater is her sweetness and compassion towards sinners, who have recourse to her with the desire to amend their lives". Kings and queens, with their ostentation of majesty, inspire terror, and cause their subjects to fear to approach them: but what fear, says St. Bernard, can the miserable have to approach this Queen of Mercy, for she inspires no terror, and shows no severity, to those who come to her, but is all sweetness and gentleness. "Why should human frailty fear to go to Mary? In her there is no austerity, nothing terrible: she is all sweetness, offering milk and wool to all". Mary is not only willing to give, but she herself offers milk and wool to all: the milk of mercy to animate our confidence, and the wool of her protection against the thunderbolts of divine justice.

How great, then, should be our confidence in this Queen, knowing her great power with God, and that she is so rich and full of mercy, that there is no one living on the earth who does not partake of her compassion and favor. This was revealed by our Blessed Lady herself to St. Bridget, saying, "I am the Queen of heaven and the Mother of Mercy; I am the joy of the just, and the door through which sinners are brought to God. There is no sinner on earth so accursed as to be deprived of my mercy; for all, if they receive nothing else through my intercession, receive the grace of being less tempted by the devils than they would otherwise have been". "No one," she adds, "unless the irrevocable sentence has been pronounced" (that is, the one pronounced on the damned), "is so cast off by God that he will not return to him, and enjoy his mercy, if he invokes my aid". "I am called by all the Mother of Mercy, and truly the mercy of my Son towards men has made me thus merciful towards them"; and she concludes by saying, "and therefore miserable will he be, and miserable will he be to all eternity, who, in this life, having it in his power to invoke me, who am so compassionate to all, and so desirous to assist sinners, is miserable enough not to invoke me, and so is damned".

Let us, then, have recourse, and always have recourse, to this most sweet Queen, if we would be certain of salvation; and if we are alarmed and disheartened at the sight of our sins, let us remember that it is in order to save the greatest and most abandoned sinners, who recommend themselves to her, that Mary is made the Queen of Mercy.

Act of Consecration to the Immaculate Heart of Mary by Pope Pius XII
Encyclical “Ad Caeli Reginam”
About the veneration of Mary's Queenship
The great confidence in Mary, Queen of Mercy 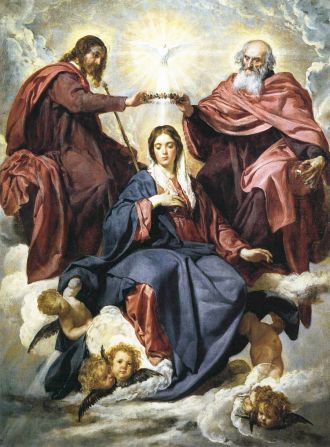 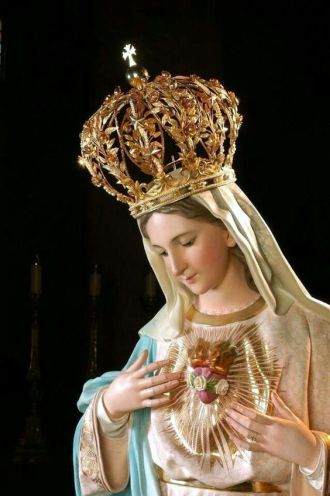 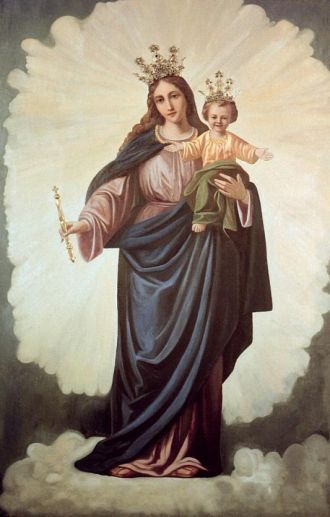 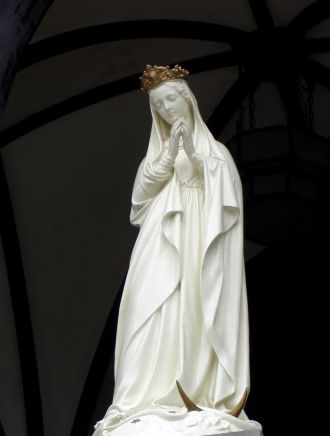