On June 19 is Feast of St. Juliana Falconieri. She founded at Florence the Order of the Mantellati, attached to the Order of Servites.

Juliana's father was known as Chiarissimo and her mother's name was Riguardata. Chiarissimo had been a cloth merchant for a long time and he had become a very rich man. During his life he did a very great deed, by building the Church of the Annunciation, in Carfaggio. Chiarissimo and Rigurardata were both advanced in years and still did not have any children. But in 1270, the good God answered their prayers, and Juliana was born.

From a very young age Juliana loved to pray. She was a very intelligent child and enjoyed hearing the things about God. She never cared for the things that amused other girls, but loved to spend her time in prayer and in Church.

Juliana's father died when she was very young. Her Uncle, St. Alexius, who was also her Godfather made sure that she received a good religious upbringing. Alexius encouraged Juliana throughout her childhood, to practice Christian perfection and to love the religious life. He also made sure that she had a good education. In school, she learned languages, and some of the sciences. Juliana could read and understand Latin, and could sew and embroider.

St. Alexius was one of the Founders of the "Servites of Mary." The Order started in a very miraculous manner!

Because of her great love for Our Lady of Sorrows and Christ Crucified, Juliana desired to join the Servants of Mary in the sixteenth year of her age. Even though there was no Order of Servite Nuns, St. Philip and St. Alexius believed that Juliana would be the one to found the order for women, at a later time. She was carefully taught by her Uncle Alexius, before joining the Servites as a Tertiary (Third Order member). She was given the Servite habit by St. Philip, in the Church of the Annunciation, and a year later, she made her Profession as a Tertiary.

Juliana continued to live at home, taking care of her mother who was in very bad health. Juliana was allowed to use a part of her mother's house to carry on her religious life. There she lived like a nun, praying and doing penance. She also acted like a missionary and directed the lives of others. Three of her cousins, and some other girls her own age, also followed her way of life and the rule she gave them.

During this time, St. Philip used to visit Juliana to teach her about the monastic ways of life. In this way, she would be ready to set up her order, when it was time to do so. As the days passed by, Riguardata, seeing that her daughter was a holy woman, placed herself under Juliana's spiritual direction.

St. Philip died in 1285. He had been a great help to the little group. Juliana, seeing that the number of tertiaries increased, decided to start up a community. In 1287, St. Alexius told her to move to a house near the Church of the Annunciation. Juliana still had to remain at home with her mother, but she continued to visit and help the community. She also did many works of charity towards others.

Juliana got all her strength from the Blessed Sacrament. She was an angel of mercy and would often restore peace and help enemies, to become friends, again. Juliana often visited the sick. She gave them much love and comfort and would often bandage their wounds. Juliana also prepared them for the Sacraments and laid out the dead for burial.

However, St. Juliana was very hard on herself. She lived like a hermit of the desert, and ate barely enough to keep her alive. She slept on the bare ground and took only a few hours of sleep. She wore a hair shirt and an iron girdle for penance, and scourged herself everyday.

In this way Juliana lived at home, for twenty-one years. During this time, Riguardata placed herself under her daughter's direction. Juliana's mother died in 1305. Immediately after her death, Juliana gave away the great fortune, which had been left to her. Then she and several tertiaries moved into a house of their own, thus beginning the first Convent of the Sisters of the Third Order of Servites.

Up to this time, the sisters simply followed the rules of the tertiaries in the world. When the Sisters elected Juliana as their Superior, the holy nun was shocked. She burst into tears and begged them not to put this burden upon her, but she finally gave in and became Prioress.

Their habit was a black gown, a leather girdle, and a white veil. They devoted themselves especially to the care of the sick and other works of mercy. Juliana, through her noble works of mercy, gave a great example to all the Sisters. They loved and respected her, and tried to imitate her virtues.

The miracle on her death-bed

Juliana remained Mother Superior for thirty-five years. By the time she was seventy years old, she was in very poor - health and suffered much from stomach problems. Her stomach had become so weakened from her penances, fasts, iron girdle, and disciplines that she was no longer able to eat any food, and she was always vomiting. Because of her illness she retired from the office as Superior, in 1341. Juliana used this time to pray, do penance, and prepare for death.

Because of her bad health, St. Juliana could no longer receive Holy Communion. She begged Jesus, Mary and her Guardian Angel, to comfort her, because of this heavy cross. Christ appeared to her as a Child and crowned her with flowers. She longed to receive Our Lord and cried out, "0 Good Jesus, is it possible that I must die without being united to You?" Then in one last effort to receive our Lord, she begged her Confessor to let her see the Host and adore It.

Fr. Reggie went to the Chapel and brought the Host in a pyx to her cell. As soon as he entered the room, Juliana got up from her bed, and threw herself on the ground in adoration. Her face became like the face of an Angel. She begged the good priest to let her kiss the Host, but he told her that was impossible. Then Juliana begged the Fr. Reggio, to spread a Corporal upon her breast and lay the Host on it. Suddenly the Host disappeared and St. Juliana joyfully cried out, "O My Sweet Jesus!" The holy nun remained in ecstasy, and died with great love, in the arms of Jesus on June 12, 1341.

After her death the figure of the host was found imprinted on the left side of her breast; by which prodigy it was judged that Christ had miraculously satisfied her languishing holy desire. The fame of this miracle, and of many others with which God honored her after her death, won for Juliana the esteem of the whole Christian world.

Her holy body was buried in the magnificent Church which her father had built in honor of the Blessed Virgin and in memory of the Annunciation. Miracles have been frequently effected through her intercession, among which several have been juridically proved.

Pope Benedict XIII enrolled her name among the blessed in 1729. His successor, Clement XII, put the last hand to her canonization in 1737.

St. Juliana had, in her last sickness, the most intense desire to receive Holy Communion. How agreeable this was to the Almighty, He made manifest by the miracle related in her life. It is a great favor when, before we depart from this life, we worthily receive the Blessed Eucharist; as it imparts peculiar strength against the temptations of the devil. The Christians of olden times were wont to strengthen themselves, by receiving Holy Communion, before they were led to be tortured, in order to oppose the tyrants fearlessly, and to suffer the impending martyrdom with heroism. At present, we have more to fight against the Evil One than against tyrants, and if we have not to suffer martyrdom, we still are tormented by anguish and sorrow. The Holy Communion is most efficacious in imparting strength and endurance. Pray today, and pray frequently that the Almighty may not permit you to die without having devoutly received this Bread of Life. To become more worthy of this grace, endeavor, while you enjoy health, to receive Holy Communion often and with due reverence and purity. It is our duty to entertain a fervent desire to do so. If our faith in the presence of Christ is deeply rooted, our desire, our longing after him will be fervent: and the more fervent it is, the more graces we may promise ourselves to receive through the Holy Communion. 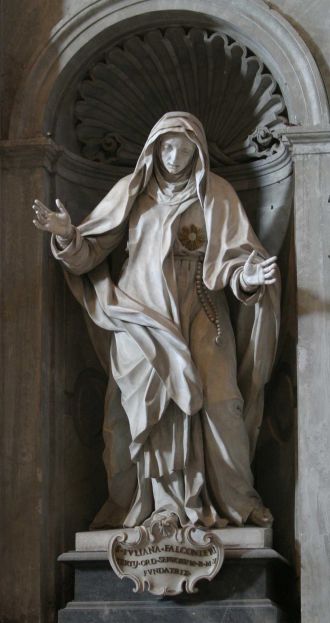 The statue of St. Juliana Falconieri in St. Peter’s Basilica in Rome 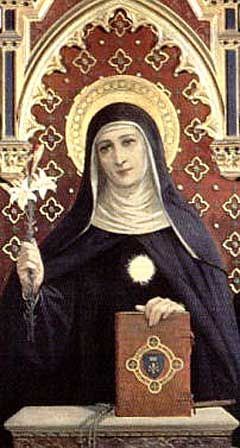 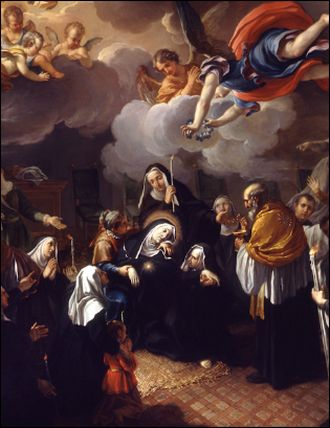 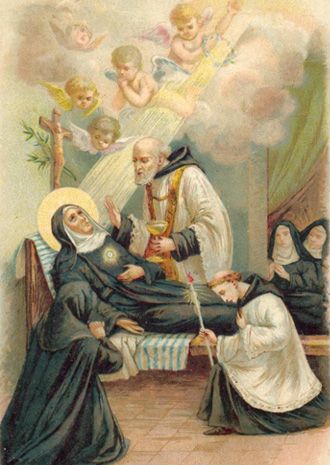 The body of St. Juliana Falconieri is preserved under a side altar in the Church of Santissima Annunziata