Today (June 21) is Feast of St. Aloysius Gonzaga. He is a patron of Catholic youth. Amid the seductions of courts the young prince, full of merits and virtues, kept his first innocence by marvels of mortification.

Saint Aloysius, the eldest son of Ferdinand Gonzaga, Marquis of Castiglione, was born on the 9th of March, 1568. The first words he pronounced were the holy names of Jesus and Mary.

His devotion to the Blessed Virgin was much inflamed by reading a little book of Gaspar Loartes on the mysteries of the Rosary.

When he was nine years of age he made a vow of perpetual virginity, and by a special grace was always exempted from temptations against purity. He received his first Communion at the hands of Saint Charles Borromeo. At an early age he resolved to leave the world, and in a vision was directed by our Blessed Lady to join the Society of Jesus. The Saint's mother rejoiced on learning his determination to become a religious, but his father for three years refused his consent. At length Saint Aloysius obtained permission to enter the novitiate on November 25, 1585.

He pronounced his vows after two years, and studied, as was customary, philosophy and theology. A fervent penitent at all times, he was accustomed to say that he doubted whether without penance grace could continue to make headway against nature, which, when not afflicted and chastised, tends gradually to relapse into its unredeemed state, and thereby loses the habit of suffering. I am a crooked piece of iron, he said, and have come into religion to be made straight by the hammer of mortification and penance.

From his infancy he had chosen the Blessed Virgin for his special patroness and advocate. Humility and obedience were the young novice’s favourite virtues, and by them he gained a perfect mastery over himself. The saint bore in silence and joy the imputation and chastisement of the faults of any others, because this afforded him an opportunity of exercising patience, meekness, and humility.

During his last year of theology a malignant fever broke out in Rome. The Saint offered himself for the service of the sick, and was accepted for the dangerous duty. Several of the religious contracted the fever, and Aloysius was among them. He was at the point of death but recovered, only to relapse a little later into a slow fever, which after three months his fragile health could no longer resist. He died at the age of twenty-three, repeating the Holy Name, a little after midnight between the 20th and 21st of June, 1591, on the octave day of Corpus Christi.

On December 31, 1726, Aloysius Gonzaga was canonized together with another Jesuit novice, Stanislaus Kostka, by Pope Benedict XIII. Pope Benedict XIII also declared him to the patron saint of young students in 1729. In 1926, he was named patron of Christian youth by Pope Pius XI. His remains are in the church of St. Ignazio in Rome in a magnificent urn of lapis lazuli wreathed with festoons of silver. The altar has for its centerpiece a large marble relief of the Saint by Le Gros. 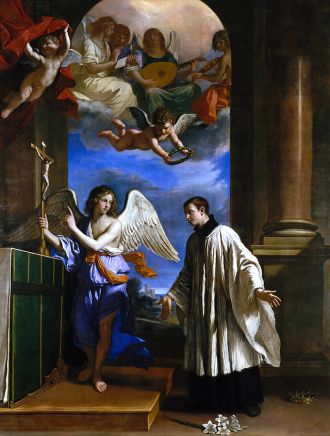 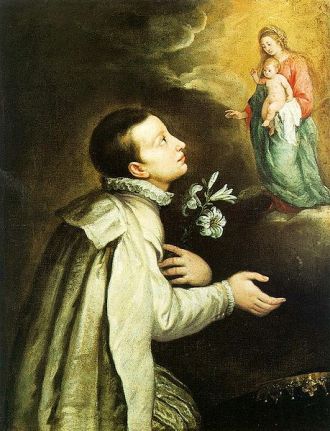