Feast of the Saints Peter and Paul

This feast day commemorates the martyrdom of the two great Apostles, assigned by tradition to the same day of June in the year 67. They had been imprisoned in the famous Mamertine Prison of Rome and both had foreseen their approaching death. Saint Peter was crucified; Saint Paul, a Roman citizen, was slain by the sword. Tomorrow the Church commemorates the Apostle of the Gentiles; today is dedicated primarily to Saint Peter.

The Chief of the Apostles was a native of Galilee like Our Lord. As he was fishing on its large lake he was called by Our Lord to be one of His apostles. Peter was poor and unlearned, but candid, eager, and loving. In his heart, first of all, his conviction grew, and then from his lips came the spontaneous confession: Thou art the Christ, the Son of the living God! Our Lord chose him and prepared him to be the Rock on which He would build His Church, His Vicar on earth, the Head and Prince of His Apostles, the center and indispensable bond of the Church's unity, the unique channel of all spiritual powers, the guardian and unerring teacher of His truth.

All Scripture is alive with Saint Peter; his name appears no fewer than 160 times in the New Testament. But it is after Pentecost that he stands out in the full grandeur of his office. He sees to the replacement of the fallen disciple; he admits the Jews by thousands into the fold and in the person of Cornelius, opens it to the Gentiles; he founds and for a time rules the Church at Antioch.

Ten years after the Ascension Saint Peter transferred his apostolic capital to Rome, going in person to the center of the majestic Roman Empire, where were gathered the glories and riches of the earth, along with all the powers of evil. From there he sent Saint Mark, his valued secretary, to establish the Church of Alexandria in Egypt. In Rome Saint Peter's Chair was placed; there for twenty-five years he labored at building up the great Roman Church. He was crucified by order of Nero and buried on the Vatican Hill, where now the Basilica stands which bears his name. 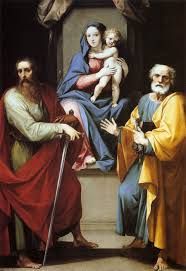 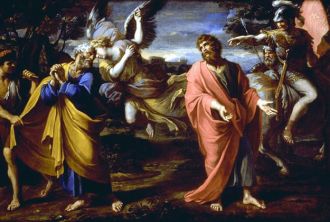